Netanyahu rejects 'deal of the century for Iran'

Israeli Prime Minister Benjamin Netanyahu and US Secretary of State John Kerry reportedly clash before Kerry headed to Geneva for the Iran talks. 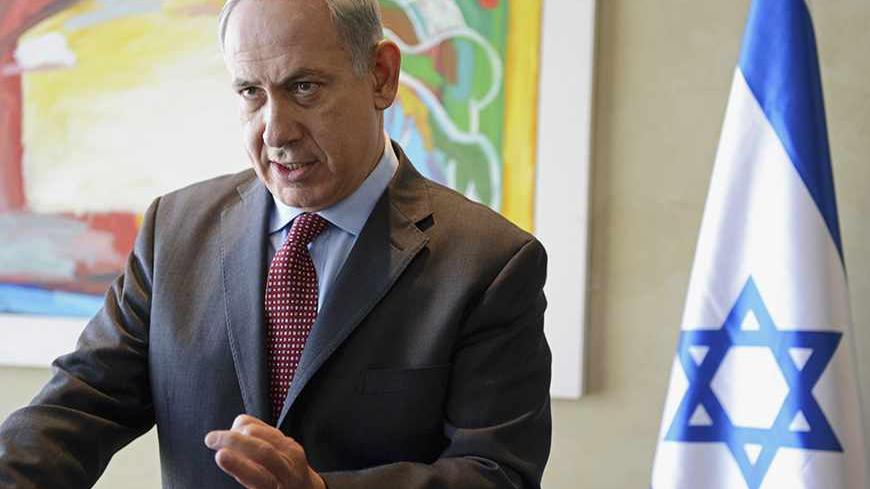 This past Wednesday, Nov. 6, two days before the breakthrough and shortly before a historic agreement between Iran and the world powers is penned, a well-versed senior Israeli official told me that Israel was concerned by the “back-channel” negotiations between the United States and Iran. That channel, according to the Israeli source, has been very much alive and productive in recent weeks, having begun well before the start of the official negotiations between Iran and the powers, and that’s the main track where agreements and progress are being made.

Israel, the senior official added, has information about what’s going on in Iran. It also knows to a great extent what is going on in the negotiations between Iran and the Western powers (5+1). What it doesn’t know anything about, is what the Americans and the Iranians are concocting in the back rooms.

Today, Friday, Nov. 8, as I’m writing this article, it has become apparent that these apprehensions were not unfounded. It seems that we’re headed toward a “historic” interim agreement that might pave the way to a final agreement that would put an end to the nuclear crisis between Iran and the powers.

The report on the agreement-in-the-making provoked a bona fide drama which took place on Friday before noon during that last meeting between Prime Minister Benjamin Netanyahu and US Secretary of State John Kerry.

Over the last three days, Netanyahu met with Kerry three times, the last one being this Friday at Ben Gurion Airport as Kerry was leaving urgently to join the deliberations in Geneva.

Their two-hour talk focused exclusively on the agreement-in-the-making between Iran and the world powers. Israeli officials said it was a "serious, head-on, blunt clash" between Israel and the United States. Netanyahu claimed that the powers had deceived Israel, since only two days earlier they were still assuring him that there was no intention of lifting the sanctions on Iran but rather to release accounts that previously had been frozen; nothing else.

Now, Netanyahu says, it turns out that they intend to undo the sanctions on the petrochemical and automotive industries, as well as on gold trade and more. You will bring about the collapse of the sanction regime, Netanyahu argued. Israel has no intention of taking part in this catastrophe. We do not see ourselves obliged to this move and will do whatever is necessary to defend Israel and the security of its citizens.

Indeed, it took Netanyahu only a few seconds before pouring a large bucket of icy water on the celebration in Geneva. His first reaction, aired before noontime on Friday, was irate, somber and defiant.

“Israel does not recognize this agreement,” Netanyahu stated, calling it the “deal of the century for Iran. I understand the Iranians are walking around very satisfied, as well they should, because they got everything and paid nothing. They wanted relief from sanctions ... and got that. They did not want to give up their enrichment capability, and they didn’t. This is a bad deal. Israel is not obliged by it. Israel will do everything it needs to defend itself and the security of its people.”

Netanyahu continued to make an important addition: “What I am saying is shared by many in the region, whether or not they express it publicly.”

The hint — broad as a nuclear reactor — is aimed at the Persian Gulf. Saudi Arabia, the United Arab Emirates, Bahrain, Kuwait, as well as other countries, share Israel’s concern. There is much anger, although nobody has a clue what to do next. The French, too, believe that the evolving agreement is bad for the world and good for Iran. The United Kingdom, on the other hand, toes the line with the United States.

According to several sources, the Americans deliberately called off a joint photo-op of the two leaders after the said meeting. Kerry was in a hurry to get on his plane to join the talks in Geneva. It is possible that this head-on collision with Netanyahu is what prompted Kerry to meet with journalists in Geneva and announce that "there is no agreement at this point" and that some of the issues "have yet to be finalized."

There is a conspiracy theory going around Israel to the effect that this is all a charade. As part of the negotiation technique, Israel — in coordination with the United States — is raising a hue and cry in order to crank up pressure on Iran. Vis-a-vis the Iranians, Israel plays the bad cop whereas the Americans play the good cop. According to this theory, the real gaps between Jerusalem and Washington regarding the tenets of the future agreement with Iran are not big. The principle is more or less agreed on, albeit the means for its implementation less so.

“It all depends on where Iran will be once this is all over,” says a senior Israeli defense official. “It depends on the number of centrifuges and their level, as well as the status of the plutonium reactor in Arak.”

Israel demands that all the centrifuges be removed from Iran, that the plutonium track be shut down and that all enriched uranium be removed from that country. These are the top demands. Presumably, Israel will settle for less, but not by much. Jerusalem will agree to let Tehran keep a token amount of enriched uranium and a small number of centrifuges which are not state-of-the-art, such as the ones that have been recently installed. This is an inconvenience Israel could come to terms with. According to this approach, the reactor in Arak would come under tight supervision, including on-line cameras and intrusive spot checks. This is an agreement Jerusalem could live with. But what if such an agreement isn’t reached?

A prominent and well-known Jewish-American leader recently related the following story to an Israeli friend: I met with US Vice President Joe Biden, who told me that in his talks with President Barack Obama, he was very resolute. I am convinced, said the vice president to the president, that Bibi Netanyahu’s threats are empty. There’s no way the Israeli premier will strike in Iran on his own. An argument ensued between the two people. According to the Jewish leader, Biden told him that he had told President Obama that he was willing “to bet his job.” Bibi will never strike, Biden said. I know him.

The problem is that even when you are familiar with Bibi, his limitations and fears and shadows that surround him and wake up his demons, you can never make a safe bet when it comes to the Iranian issue. When this is hanging in the balance, Netanyahu sees himself as a historic emissary. Having a messianic outlook, he believes wholeheartedly that his life’s calling is to prevent a second Jewish holocaust.

By the way, he may not be wrong. In recent years, Israel has invested billions of dollars in preparing a military option that should enable it to deal a serious blow to Iran and undermine its nuclear infrastructure. Indeed, the Israeli blow does not aim to destroy Iran’s nuclear project altogether but only to stall it. Some believe that such a move will prompt the Americans, at some stage, to join in, thereby likely triggering a chain reaction that will significantly distance Iran from a nuclear bomb.

The decision whether or not to strike in Iran rests with Israel’s security cabinet, which at the moment consists of seven ministers: Prime Minister Netanyahu, Finance Minister Yair Lapid, Justice Minister Tzipi Livni, Economy and Trade Minister Naftali Bennett, Defense Minister Moshe (Bogie) Ya’alon, Minister of Internal Security Yitzhak Aharonovich and Home Front Defense Minister Gilad Erdan. The acquittal this week, Nov. 6, of former Foreign Minister Avigdor Liberman, who will resume office next Monday, should bring him back to the cabinet, which by then will consist of eight members.

The demand for a small, inner cabinet — previous cabinets consisted of 14 to 16 ministers — was made by Netanyahu himself in his incumbent government. It can be assessed that what he wanted was to organize a small, low-key, flexible forum that he could control, and where he could secure a majority — even for a military move in Iran — with relative ease. The thing is that once Liberman joins the cabinet, the balance will shift. It’s possible that Lapid will demand to increase the representation of his party in this important forum. Presently, Lapid is the only representative from the Yesh Atid party in the cabinet. If former Shin Bet director Knesset member Yaakov Perry from Yesh Atid is added to the cabinet, a similar demand will be made to add someone from the Likud Party. The natural candidate is Minister for Intelligence Affairs Yuval Steinitz. Thus the Israeli cabinet could, over the next few days, increase from seven to 10 members. And yet Netanyahu can secure an almost automatic majority for any move he wants. The question remains whether he wants to.

Speaking of Liberman, in a paradoxical twist, the moment when the weight came off his shoulders during his long-distance run to the premiership, is also the moment where he found himself the farthest from reaching that objective. Polls from this weekend suggest that Liberman is rapidly losing his electoral magnet. The most recent poll in SofHaShavua (and The Post) weekly indicates that if the Likud and Israel Beitenu parties were to run in separate slates, the Likud under Netanyahu would garner 36 seats and Liberman only five, a third of what he received the last time he ran independently, back in 2009.

This week Liberman was unanimously acquitted of fraud and breach of trust by a three-judge panel in the Magistrate Court in Jerusalem. This was the finale of a 17-year odyssey during which Liberman was questioned by Israel’s law enforcement agencies about many affairs. Cases were opened and closed. His affairs were checked and scrutinized until the attorney general, Yehuda Weinstein, ultimately decided to shelve the main case on the “front companies” arraigning him instead on some trifle, inconsequential and bizarre affair. He was suspected of receiving a document from an Israeli ambassador serving in a European country about some legal investigation that was being conducted against him in that country. In return he allegedly promoted the ambassador in the Ministry of Foreign Affairs.

Well, Liberman was found not guilty. The chances that the attorney general will appeal the acquittal are not high. The case is closed. Seventeen years of investigations had come to an end. Babies that were born when the investigation was launched will be drafted to the Israel Defense Forces next year. For the first time, Liberman walks the corridors of Israeli politics without being under a cloud.

“I felt like an astronaut launched to space,” he told me moments after his acquittal. “I totally blacked out. It was as if I had lost gravity, floating weightless in the air. Other than the word acquittal, I remember nothing.”

Such a monologue had never been heard from Liberman who is said to be a tough, durable person devoid of human feelings. Well, it turns out that Liberman is flesh and blood after all. Politically speaking, he was reborn this week. On the other hand, it seems he’ll have a difficult childhood.