Although Azerbaijan is warming its relations with Russia and Iran, Ankara still remains the most pivotal ally for Baku. 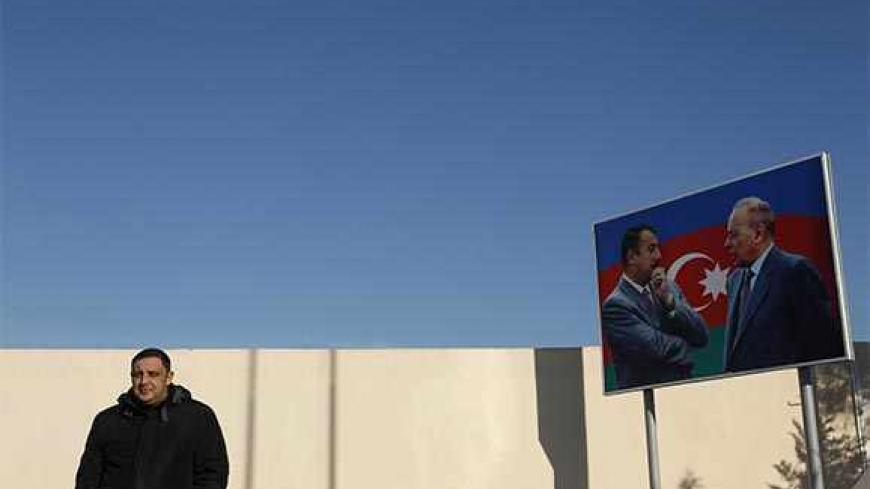 Oil worker Namik Aliyev stands next to a billboard of Azerbaijan's President Ilham Aliyev (L) and his father late President Haidar Aliyev, as he waits for a helicopter on the island of Chilov in the Caspian Sea, about 70 km (44 miles) east of Baku, Jan. 23, 2013. -

When Turkey decided to launch an initiative to normalize its relations with Armenia in May 2009, Azerbaijan perceived it as a betrayal by the Turkish-Azeri alliance and their brotherly relations based on sharing the same ethnic background. The Azeri officials still insist to this day that Turkey did not inform them about that initiative in advance, and that they learned it from the media like everyone else. That caused a significant turmoil in Azeri confidence in Turkey. Ankara was perceived as acting solely on its own national interests, trading off the territories in mountainous Karabakh that have been occupied by Armenia since 1991. And this perception of Turkey really struck a sensitive nerve in the Azeri society.

Perhaps these two countries won’t ever trust each other as they did prior to this incident, but, nevertheless, it has also become clear that no crisis between Turkey and Azerbaijan can leave a permanent scar in this pivotal relationship. Although the Turkey-Armenia normalization efforts are long gone, technically speaking, Ankara did not actually cause any harm to Azerbaijan in the end. What’s noteworthy is that Azerbaijan started to pay more attention to balancing and improving its relationships with its powerful neighbors like Russia and Iran. It’s as if the Azeri government is trying to implement Turkish Foreign Minister Ahmet Davutoglu’s failed attempt for Turkey's “having zero problems with neighbors” policy.

“Today, Azerbaijan’s initiatives in regional affairs are of great importance not only for our country, but also for the region. Our economic and political initiatives pursue one goal: first of all, to enable the people of Azerbaijan to live even better,” Ilham Aliyev, president of Azerbaijan, told a crowd of nearly 1,000 people last week, Oct. 31, during the third Baku International Humanitarian Conference. “On the other hand, we want to be in constant communication with neighboring nations. The purpose of our regional initiatives is to further strengthen our ties with neighboring countries. Today this is the case. Azerbaijan has very sincere and constructive relations with its neighbors. Our relations with all countries are based on a very sound footing. These are relations of friendship and partnership, equal relationships.”

Matt Bryza, the former US ambassador to Azerbaijan, however, argues that they’re not really multitasking. “They have the opposite ambition of Turkey,” he told Al-Monitor. “They’re extremely vulnerable to outside intervention, and they’re trying to do the best they can to save themselves from any problems.” He added: “Azerbaijan’s survival as an independent and sovereign state is dependent on the pipelines that physically and economically interconnect it to Turkey and the Western world.”

Still though, Azerbaijan announced in October that it is considering opening Hudaferin border gate to Iran. Even the thought of this would not have been possible a few years ago. The reason is simple. Iran has developed strong relations with Armenia in a way to side with the Soviet Union and, today, Russia against the United States, and that put it in an awkward position — religiously — as it stood against the interests of Azerbaijan. Not that Iran had any direct role to play in the Nagorno Karabagh conflict, but its posturing benefited the Armenians on this issue. Azerbaijan, ethnically Turkish and religiously from the Shiite school of Islam like Iran, chose to stay away from the orbit of Russia after announcing their independence, and therefore sided with Turkey and therefore the United States and NATO alliance.

The Aliyev government is certainly trying to do its best in keeping its relationships manageable with all of its neighbors — even with those like Iran, where a large part of the population is of Azeri origin, and which can not relieve itself from the fear that this Azeri population will one day seek to establish a greater Azerbaijan, taking significant chunks land away from them.

All that said, at the core of all of this outreach to its neighbors, one would not be exaggerating to say that Azerbaijan is always thinking about how it can help end Armenian occupation of its land in Nagorno-Karabagh.

“We hope that the conflict will be resolved and Azerbaijan’s territorial integrity recognized by the international community will be restored in the near future. There is a strong legal basis for that. There are four UN Security Council resolutions which explicitly state that the Armenian armed forces should unconditionally withdraw from the occupied Azerbaijani lands,” Aliyev said.

The sense in Baku is that the failure in following up on these resolutions directly challenges the credibility of the United States and United Nations. Moreover, Azeri authorities have no confidence in the MINSK group, headed by a co-chairmanship consisting of France, Russia and the United States, which is tasked to resolve the Nagorno-Karabagh issue. The MINSK group also includes Belarus, Germany, Italy, Portugal, the Netherlands, Sweden, Finland, Turkey, Azerbaijan and Armenia.

Under these circumstances, it looks quite unlikely to expect Armenians to end their occupation in Nagorno-Karabagh any time soon. On the contrary, Azerbaijan warns against ethnic Armenian Syrians being relocated to the occupied territories. Azernews reported in its Jan. 5, 2013, edition that Armenia continues its illegal activity of attempting to artificially change the demographic situation in Nagorno-Karabagh thus ignoring the international community’s position which condemns such activities. “Recently, about 200 Armenian refugees from Syria were settled in the occupied Zangilan region, which was another clear evidence of the illegal settlement policy pursued by the Armenian state,” the paper reported.

One would have hoped in fact that these war-torn Syrian refugees were to be placed in a safer area — away from any potential conflict.  But the international community seems to also fail to warn Armenia on this matter as well.

To sum up, the attempted effort to normalize relations between Turkey and Armenia failed at no cost to relations between Turkey and Azerbaijan, because Turkey remains the most reliable and safe route for Azeris to export their oil and natural gas to international markets. In that light, in addition to the Baku-Tiblisi-Ceyhan pipeline, Azerbaijan started to prioritize its direct investment in Turkey. In September, Turkish Energy and Natural Resources Minister Taner Yildiz announced that Azerbaijan will make 17 billion lira investment in the economy of Turkey for the construction of the Trans-Anatolian gas pipeline project (TANAP) and implementation of other project. TANAP will allow transporting gas from Azerbaijani Shah Deniz field to Europe through Turkey — and this is the way for Azerbaijan to sustain its independence and strengthen its sovereignty.

Editor's Note: A previous version of this article incorrectly stated that half the Iranian population is of Azeri origin. Most estimates place the proportion somewhere between 16 and 40 percent.