The International Press Institute is set to publish a guide for reporters on the use of language in the Israeli-Palestinian conflict, aimed at addressing sensitivities on both sides. 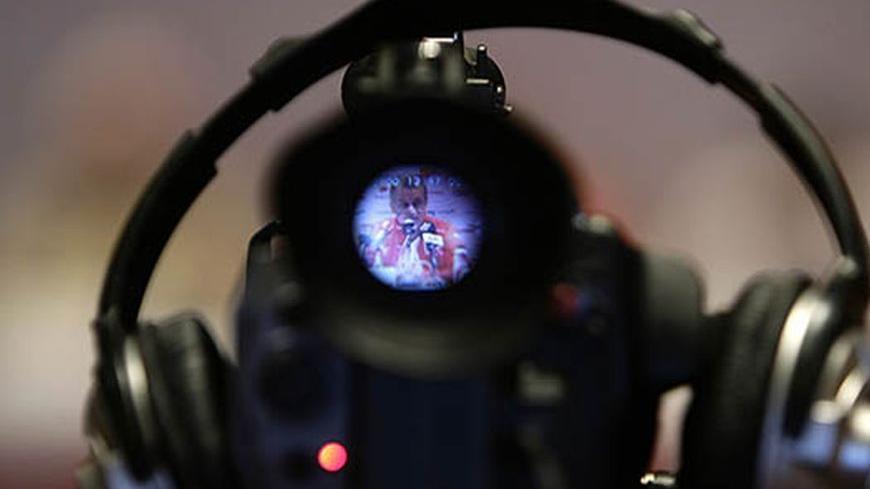 The International Press Institute's booklet "Use With Care" helps reporters navigate the Israeli-Palestinian conflict. Above, a press conference in Tel Aviv is seen through a video camera, Sept. 5, 2008. - REUTERS/Stefan Wermuth

It has been said that history is written by the victors. If that is the case, then the reporters guide to language use in the Israeli-Palestinian conflict soon to be released might reflect that there are no winners in this decades-old struggle. IPI will issue a press release on the booklet tomorrow, Oct. 23.

The reporters guide, Use with Care: A Reporter's Glossary of Loaded Language in the Israeli-Palestinian Conflict, was produced by the Vienna-based International Press Institute (IPI) and is the result of years of back-and-forth drafting by six unnamed Palestinian and Israeli journalists. The guidebook should be found in every newsroom in the world that deals with the Arab-Israeli conflict.

Some 150 terms are represented in the guide. Each term is listed in English, Arabic and Hebrew, along with a phonetic transcription of both the Hebrew and Arabic words in Latin characters. Alongside every term are two or three paragraphs explaning the meaning of the term, how it is used and why one side or the other might find it problematic. Finally, another column suggests alternative terms.

The authors, editors and IPI publishers, however, don’t always suggest alternatives, but sometimes choose to accept a particular term as the most appropriate. "Occupation," "siege," "demonstration," "Nakba," "settlers" and "settlements," for example, are explained and the publishers conclude that they are appropriate descriptions. Similarly, "Zionism" is described and accepted as a proper term. However, "Zionist entity" is not. After explaining that the latter is used as a way to avoid recognizing Israel, the authors suggest the use of the alternative term, Israel. The same is suggested as an alternative for the term “Jewish state,” which the authors say is problematic for Palestinians because it is “ignores and downplays the Arab/Palestinian history and culture of cities and places that predate the existence of the State of Israel. Palestinians also believe the expression indicates that non-Jewish Israelis, such as Palestinian citizens of Israel, are not fully part of society or the state.” Here, again, they suggest using “Israel.”

The guide also recommends that some adjectives used with certain terms be dropped. For example, “innocent civilians” is often used by both sides when referring to a violent act that results in the death of civilians. The publishers suggest simply dropping the adjective.

The terms “terrorism” and “terrorists” are also handled in a long entry. The authors refer to the internationally accepted definition of terrorism as “an act of violence carried out to advance political goals.” They suggest that reporters use the term for the specific act instead of “terrorism,” but they are not opposed to using the latter if it does fit the definition.

The term “Judea and Samaria” is described by the authors as a “biblical reference that confers a Jewish-Israeli ownership of that land, which is offensive to Palestinians.” The authors and publishers suggest the geographic term “West Bank.”

"Martyr" or "martyrdom acts" are also discussed in detail and alternatives are suggested. For example, “'Shahid' is a religious description in Islam of someone who is killed by an enemy. It is used by Palestinian media as a nationalistic or patriotic reference to anyone killed by Israelis, regardless of how the person is killed, or whether the person is a Muslim.” The authors suggest using a simple alternative — the neutral term “dead” — or if it is a person who carried out a suicide mission, “suicide bomber" or "suicide attacker.”

In the introduction to the 59-page booklet, Allison Bethel McKenzie, the executive director of the IPI and the publisher of the guide, says she hopes it will promote dialogue, explaining, “Journalists should understand and choose their words in a way that is sensitive to the cultural and political realities of this long conflict.” Naomi Hunt, the guide’s editor, adds that she hopes the guide will serve as “a useful tool and starting point for conversation about the dangers and possibilities of language in describing a conflict.”

While the six Palestinian and Israeli authors are not mentioned, one gets the impression that they are veteran journalists, politically moderate and most likely supporters of the two-state solution.

The booklet was produced with a donation from the Norwegian Foreign Ministry. It will be published in hard copy and and pdf form, initially available only in English. Publishers are hoping to be able to make it available in Arabic and Hebrew as well.