A report by the International Press Institute criticizes restrictions on movement for Israeli and Palestinian journalists covering the Arab-Israeli conflict. 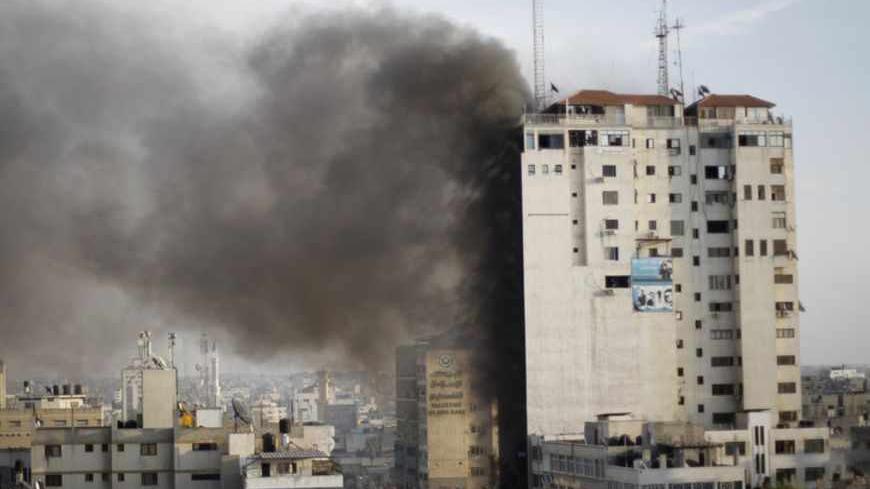 Smoke is seen after an Israeli air strike, witnessed by a Reuters journalist, on a floor in a building that houses media offices in Gaza City, Nov. 19, 2012. - REUTERS/Ahmed Jadallah

If physical access is an important requirement for good journalism, the ability of Palestinians and Israelis to cover their ongoing conflict is largely compromised. This is one of the issues raised by a delegation of the International Press Institute (IPI) that visited Palestine and Israel in February.

The mission sponsored by the Vienna-based nongovernmental organization produced “Patriotism, Pressure and Press Freedom: How Israeli and Palestinian Media Cover the Conflict from Inside,” a 37-page report based on interviews with more than 50 media practitioners in Gaza, the West Bank and Israel. The report focuses initially on how local media covered the November 2012 Israeli war on Gaza, but a closer look at the report’s recommendations zooms in on restrictions on journalists' freedom of movement as the biggest problem facing members of the Palestinian and Israeli press.

It is not unusual that during times of war or intense violence, such as the eight-day Gaza campaign in 2012, journalists become susceptible to wrapping themselves in their national flag. The Palestinian and Israeli journalists interviewed by the IPI delegation made no qualms about being subjective during those days. The report also states, however, that the media is not just biased, but that hate speech, incitement to violence and racism exist in abundance in major media outlets. For example, one Israeli radio broadcast reportedly told listeners not to worry, because an incoming rocket from Gaza had fallen on an Arab village, presumably instead of on an Israeli Jewish area. In another instance, a Palestinian reporter revealed that he had been told by a Gaza radio station that it saw itself as “jihad media.”

The violence in Gaza brought to light a few other serious media violations. The Israeli air force killed three Palestinian journalists and shelled television studios. No clear justifications were offered although media reports quoted Israeli officials asserting that the journalists and the outlets had somehow been used to direct acts of “terrorism.” No proof was provided, and a thorough investigation has been promised, but no findings have yet been made public. In another violation, Israeli engineers hijacked Palestinian radio and TV frequencies and broadcast messages over these frequencies, which caused confusion among the Palestinian public.

The most signicant part of the IPI paper is its focus on the most important aspect of journalism, namely, freedom of movement. The report notes that Israeli and Palestinian journalists are denied physical access to the other's territory and at times even the ability to speak to sources on the other side. Israel denies access by journalists on both sides — its security forces control the entry of Palestinians into Israeli territory as well as Israelis into Gaza — though for different reasons.

One factor is that Israel simply does not recognize the existence of a Palestinian press. Although Israel acknowledges Palestinian journalists working for international media outfits, members of the Israeli government press office told the IPI delegation that their office does not have a category designation for Palestinian media organizations. In short, a Palestinian journalist can be accredited if working for the BBC or Mexican TV, but not if he or she works for Palestine TV in Ramallah or the Felesteen daily out of Gaza. By denying the existence of a Palestinian press, Israeli security can apply the same restrictive policies to all Palestinians, which often requires them to be facing a life or death situation in order to gain permission to enter Jerusalem or Israel.

Israeli journalists have a different problem in terms of entering Palestinian areas, especially Gaza. The Israeli army, fearing the possibility of Israelis being kidnapped, has created a blanket rule prohibiting all Israelis, including from East Jerusalem (where Israeli law has been unilaterally applied), from entering Palestinian areas. Many Israelis are able to access the West Bank without official Israeli permission, because their exiting Israel is not controlled by checkpoints. Their getting into Gaza is a totally different issue, however, because the Erez checkpoint is the only point for movement in and out of the territory.

IPI concluded its report by recommending the lifting of all restrictions on freedom of movement for Palestinian and Israeli journalists in Gaza, Israel and the West Bank; cessation of all efforts to influence editorial content through censorship or threats; improved journalist access to official information; and solidarity by journalists on press freedom issues. Israel was asked to recognize the existence of the Palestinian press and to issue appropriate press credentials that its soldiers be sensitized to respect.

With the Palestinian-Israeli conflict ongoing for decades, a divide has developed that is difficult to bridge as a result of opinions about the “other” having become entrenched. Allowing journalists to report from the ground in the other community is no magic bullet (no pun intended), but it could represent a first step toward introducing a level of civility to help lay the groundwork for a more substantive peace process.

Editor's note: Daoud Kuttab was a member of the IPI delegation.