Will 'Oct. 10 Revolution' Materialize Against Hezbollah?

Secular Shiite opponent of Hezbollah Rami Ollaik has declared his is leading a movement against the party, though many believe nothing will come of it. 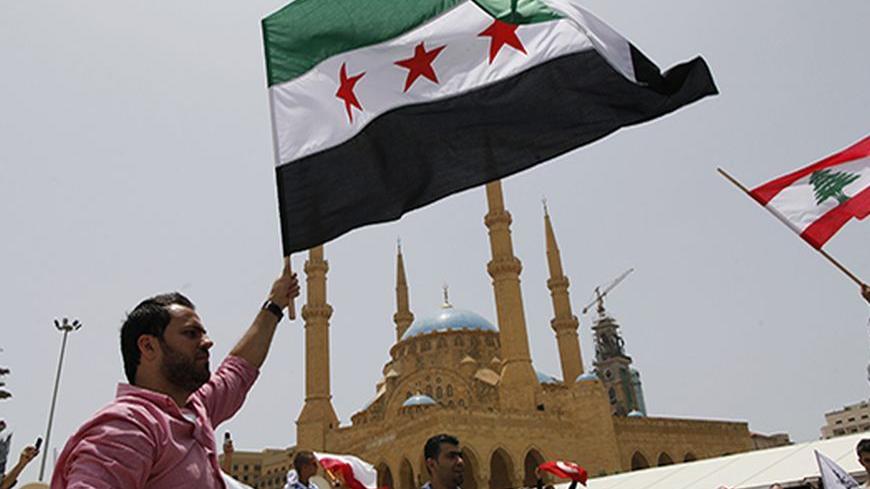 On Oct. 10, will Beirut witness a “Shiite revolution against Hezbollah?” Is this some kind of political propaganda started by opponents of the most powerful Shiite organization in Lebanon, or a joke made by a person or a group of people?

This question arises against the backdrop of the call launched by a Lebanese citizen named Rami Ollaik via media outlets and social networking sites. Ollaik called for a demonstration and a sit-in in Martyrs' Square, in the heart of the Lebanese capital. This demonstration would have as its slogan the "October 10 Revolution,” in protest against the sectarian system in Lebanon and Hezbollah.

Ollaik and five of his supporters announced this date at a press conference held on Aug. 1. They expect their call to start a revolution similar to the Cedar Revolution, which took place in Beirut in 2005, and are confident that this call will specifically be heeded by Shiites who reject the Shiite Hezbollah.

Under normal circumstances, this call would be ordinary in a country suffering from all the concurrent crises and worsening conflicts. However, this call has more resonance, given that one of its launchers is Ollaik. This young Lebanese — born in Khiam, southern Lebanon, in 1972 — presents himself in his media speeches and on the Internet as “a former leader of Hezbollah.” He says that after a study trip to the United States — one that was forcibly interrupted after the events of 9/11 and after the US authorities arrested and interrogated him — he turned against Hezbollah, left its ranks and started writing about it in opposition.

In the last five years, Ollaik went so far as to publish two books. The first is titled The Bees Road (2008) and the second Under the Green Water (2013). In both books, Ollaik writes dozens of pages about what he describes as a great Hezbollah leadership position. He says he had ties with the head of the pyramid, and that he knows about crimes committed by members of the Shiite organization. He even tells a long story about how the Hezbollah Shura, which is the highest body in the leadership of the party, convened one day to discuss the decision to assassinate him. Two members of the body — whom Ollaik hints are Hezbollah's Deputy Secretary-General Sheikh Naim Qassem and Hezbollah’s military official who succeeded Imad Mughniyeh in this position, Mustafa Badr al-Din — expressed their objections to the assassination and convinced the others of their point of view. This spared Ollaik an assassination attempt.

After the publication of these two books, Ollaik made a series of media appearances that did not resonate well. On May 29, he announced his intention to visit his hometown Yohmor in southern Lebanon — Hezbollah's key stronghold — with a delegation of his supporters.

Two days later, Ollaik filed a lawsuit at the Lebanese judiciary against 13 people from his hometown, claiming they are Hezbollah members and prevented him from entering his village. Ollaik’s complaint has not made any progress thus far, and Al-Monitor learned that the initial investigations of the security forces say that it is the people of the village who organized a sit-in against Ollaik’s visit to their village in rejection of his thoughts and words.

The case stood still at that point, until Ollaik announced on Aug. 1 the date of “his Shiite revolution against Hezbollah.”

It is worth noting that not a single official, source or figure with close ties to Hezbollah has uttered a word, taken a position or made a clarification about the Ollaik phenomenon ever since the time it started. The most powerful Shiite organization in Lebanon made no comment about Ollaik, his writings and sayings, which implies that Hezbollah is completely disregarding Ollaik on the basis that everything related to him is based on lies.

Sources close to Hezbollah confirmed this direction to Al-Monitor and added that the whole issue is just a joke and more of a state of hallucination and delirium, unless it is political propaganda on the part of the enemies of Hezbollah. In both cases, the best option is to completely disregard it.

The same sources pointed out that Ollaik was only responsible for the Hezbollah students — the educational mobilization, as it is officially called in the structure of the party — at the American University of Beirut (AUB). He never occupied any other position in the party. Consequently, his claims that he had held a leadership position in the party — and knows its secrets — and had a relationship with the senior leadership are only unfounded fabrications.

Moreover, the same sources added that Ollaik had a violent conflict with the university administration and his behavior spun out of control. At the time, Hezbollah had abandoned its theocratic character and announced its commitment to the concept of Lebanon as a state and a final homeland for its sons.

This is what made ​​it take part in the parliamentary elections of 1992 and engage in the Lebanese state institutions that started recognizing it. This followed the change at the level of the Hezbollah leadership, and the election of Abbas al-Musawi as a successor of the hard-line Secretary-General Sheikh Subhi al-Tufayli.

At that very moment, the same sources added that Ollaik continued to espouse an extremist approach, which rejects the exercise of these concepts. This led to an argument between him, as a student administrator at his university, and the management of student affairs within Hezbollah. The dispute led him to leave the party. Then, Ollaik traveled to the United States to come back as an opponent of Hezbollah, describing himself as an extremist secular liberal, having left the party as a result of his opposition to it and given its hard-line theocratic background.

According to the sources close to Hezbollah, the rest of the stories told by Ollaik in his book concerning conspiracies and assassinations are a product of his imagination. These sources even alluded to secrets they know in relation to the books and what they described as “their real author,” but said that they will refrain from revealing these secrets so as to avoid engaging in undesirable debates.

Academic sources at AUB confirmed to Al-Monitor Ollaik’s action on their campus in the mid-1990s, back when he was an administrator for Hezbollah students. They also confirmed that he clashed with the university management more than once, until he traveled to the United States. Subsequently, Ollaik was tasked with teaching a course at AUB. But the same academic sources expressed several remarks about his behavior. For example, Ollaik always introduces himself as being a professor at the university, whereas he is just an instructor (of beekeeping) of the elective course “Honey Manufacturing."

At least one faculty prevented its students from registering in this course, and considered it to have no academic value. More importantly, Ollaik introduces himself as a doctor, while academic sources have cast doubts that he actually holds a doctorate.

All these contradictory stories will be tested on Oct. 10 in downtown Beirut. Will Ollaik prove to be the leader of a Shiite revolt against Hezbollah, or will this turn out to be a joke or hoax against the party? In both scenarios, the answer will by no means have the flavor of the honey Ollaik teaches students to manufacture.