Istanbul’s future development is also tied to the memories of its past. 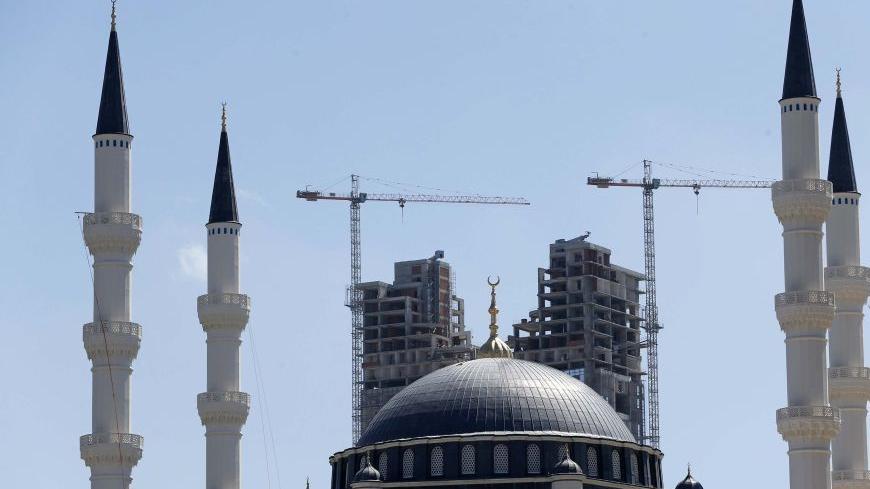 The construction of a residential tower is seen behind the newly built Mimar Sinan mosque on the Asian side of Istanbul, Sept. 4, 2012. -

Take your pick of a name for Istanbul: Would you prefer Konstantinoupolis, Islambol, the Poli or even Istanbul-not-Constantinople?

Two recent articles from Al-Monitor sparked a lively debate on whether Gulf Cities have become the new leading centers of the Arab World. While reading the response of Michael C. Dunn, the editor of the Middle East Journal, who argues that “the contrasts between the old capitals and the new, the old culture and the new, are going to be features of the Middle East over the coming generation,” I could not help but ponder on the future of Istanbul in similar dichotomy.

First, it should be noted that global trends suggest an increasing necessity of “paradiplomacy, or subnational foreign relations,” referring to strengthened local power in order to protect cities’ interests abroad. In that light, Rodrigo Tavares praised São Paulo’s acquired global diplomatic power in Foreign Affairs, observing, “The insularity of the Greek city-states is a thing of the past, along with the absolute centralization of power in national capitals.”

This might be bad news for Turkey, where the decision-making process seems as centralized as it could get. According to academic Guven Sak, “Micromanagement is a Turkish trait, embedded strongly in our psyche.” With 60% of cabinet decisions in 2012 made about local construction projects, Sak criticizes the further lack of decentralization as a negative development.

This sort of unhealthy decision-making often includes even Istanbul — the essential heavyweight among country’s urban centers — due to its importance as the most effective platform for Turkey’s global branding. On that note, in 2013, Travel and Leisure Magazine recognized Istanbul as Europe’s “Best Tourism City,” and second on the global list. There is also lot of positive official involvement in the international arena, including twinning agreements with 67 cities and active membership of the major international NGOs and in the UN system, as explained in detail in “City diplomacy and Istanbul.” Nevertheless, the report criticizes Istanbul’s prioritizing mainly on business promotion and economics. Leadership is probably content with the currently positive outcomes of their efforts. According to predictions, Beijing and Istanbul will have twice as many company headquarters by 2025.

Moreover, there are many new government plans for Istanbul’s further development. The latest issue of Turkish Review published a very comprehensive report “Istanbul 2023: Toward a Megacity.” Though it is debatable how necessary some of the 17 envisaged “crazy projects” are, many are commendable. As expected, there is a large number of both staunch supporters and harsh critics of government investments (from ecological, architectural, archeological, even legal standpoint).

Yet, it should be noted that all of these Turkish discussions on Istanbul take place through certain ideological lenses. In “Istanbul's Pasts: Raw Material for Constructing the City's Future,” academic Malte Fuhrmann explains in a very insightful and informative manner how identity and history strongly influence all aspects of everyday life. He notes, “as a metropolis [that had repeatedly] achieved the status of one of the foremost centers of political and military might, ecclesiastical authority, trade and the arts in Europe and the Middle East, Istanbul's past tends to intrude onto the present more vigorously than it does in less prominent sites.” Neglecting this context means botching an important debate.

Fuhrmann identifies four historical names of the city: Konstantinoupolis, Islambol, the Poli and Istanbul-not-Constantinople. It is crucial to understand each as separate visions of different “imagined communities” they were to create.

First, the perception of the pre-Ottoman past as a threat has led to present “negation and commodification of Konstantinoupolis.” Though Byzantine remnants are impossible to avoid in Istanbul, they are used à la carte, according to city’s reputation-enhancing needs. Second, a currently popular idea [at least among Turkey’s majority and upholders of the ruling leadership’s vision] is of Istanbul as Islambol. More precisely, it suggests “Not the radical, ahistorical Islamic city, but a post-modern megalopolis that has readorned itself with the Ottoman dynasty's emblem.” Third, there is Poli, “The city of Western order and multicultural harmony,” based on the 19th-century Pera (Beyoglu district). Fuhrmann explains that the district is once again perceived as “a gathering place for gâvurs (infidels).” Yet, as opposed to the case in Riyadh or Tehran, Beyoglu’s lively domestic art, music and nightlife scene doesn’t pose problems, since it is understood as entertainment that attracts numerous expatriates who [are welcome to] work in foreign companies. Finally, Fuhrmann calls the idea of “Istanbul, not Constantinople” as the “Requiem for a republic.” The Kemalists see the current pro-Islamist government, and their mayors, as breachers of the “founding principles of the state.” Hence, nostalgic republicans defend the spaces related to historical ideas from the past, such as Istiklal Caddesi or the Atatürk Cultural Center (AKM) on Taksim Square, even despite the fact that “the building hardly conforms to present-day popular architectural taste.”

To sum up, it seems that ideological glorifications of buildings like AKM on one hand, or of a museum celebrating the Ottoman conquest of Istanbul on the other hand, won’t easily disappear. Additionally, it is important to acknowledge a specific framework of discussions on urban politics in Istanbul. According to Fuhrmann, “the question is rather on which of the multitude of elements of the urban past they [political activists or commentators] choose to base their worldview.” (For example, Islamist writer Ali Bulac argues that “A new ‘city-civilization perspective’ is needed for Islamic centers.”)

Then there are controversies on the very nature of future development. Some perhaps really blindly oppose any construction in Istanbul. But, there are reasonable concerns about the rampant construction effort in the city, and criticisms that a “concrete civilization” is in the making. What Istanbulians ultimately need is more local conversations on projects, even more so for those of huge scale, before the government endorses them, as it should be the case in a participatory democracy.

Moreover, considering more collaboration between developers and creative people — like the recent “built-in art” gaining momentum in London — might also bring a breath of fresh air to those who feel suffocated by consumerism and myriad shopping centers. Here is to state of the art performance centers, like in the new Zorlu Center, or par excellence new opera centers like the upcoming one in Bakirkoy. Those who direct Istanbul’s development should manage it while not neglecting the fact that cities with reputations for a high quality of life, as opposed to just sightseeing or business, will always rule the game.

On the other hand, an outcry for stopping city’s further development is as futile as saying “enough of globalization already.” Istanbul’s past legacy might be both blessing and curse. So, the idea of Istanbul as the “future capital of the world” remains an ideal for some, and “as a perverse instance of wishful thinking” for others. Yet, a propitious economic climate, with all its ups and downs, has indeed been a unique opportunity for Turkey to leave a durable civilizational mark with Istanbul’s new architectural and cultural legacy. It should not be wasted.

Renowned writer Orhan Pamuk might be right to describe a peculiar feeling of  melancholy (hüzün in Turkish) as the fundamental trait of Istanbul: “a state of mind that is ultimately as life-affirming as it is negating.” Hence, in a similarly contradictory way, Istanbul’s aficionados swear on leaving the city for its unbearable traffic, overwhelming crowdedness, unpleasing new aesthetics, you name it… But they remain helplessly opiated by their love for the city.

Riada Ašimović Akyol is an independent analyst and writer. Her articles have been published by the Al Jazeera Center for Studies and Turkish daily Today’s Zaman. She is obtaining her doctorate in international relations at the Galatasaray University in Istanbul. On Twitter: @riadaaa