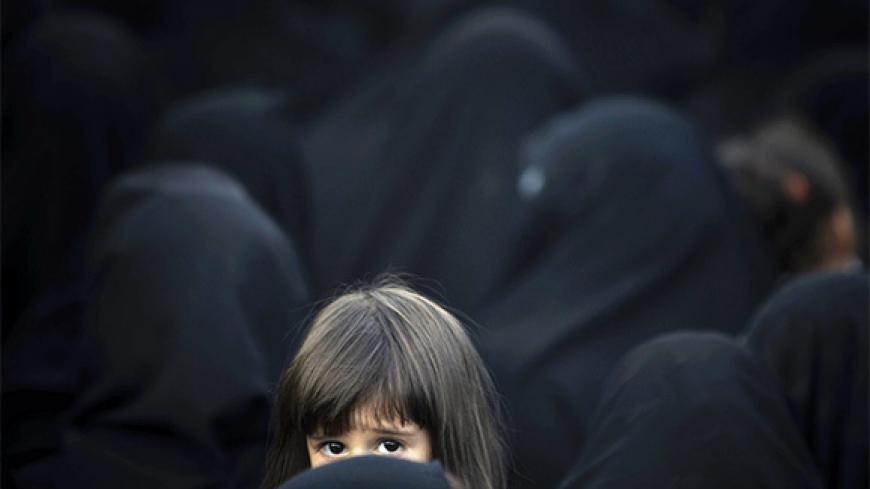 An Iranian girl looks on while she and her mother attend a religious ceremony to commemorate the anniversary of the death of Fatima, daughter of Prophet Muhammad, in southern Tehran, May 17, 2010. - REUTERS/Morteza Nikoubazl

A correspondent in Tehran
October 7, 2013

TEHRAN — A proposed law which has created a lot of controversy during the past week in Iran can trace its roots to a verse from the Quran which says,

“God has not made for any man two hearts inside his body. Neither has he made your wives whom you declare to be like your mothers’ backs, your real mothers. Nor has he made your adopted sons your real sons. That is but your saying with your mouths.”

This verse from the holy book has encouraged the media, as well as civil rights and children’s rights activists, to focus on a new law approved by the parliament, which allows foster parents to marry their adopted children despite the fact that parliament had originally intended to pass a law which forbade this type of marriage.

The legislation, titled “Protection of Children and Adolescents with no guardian (adoption),” was approved by parliament last winter. It was lost, however, in the midst of pre- and post- election excitement. It was only a letter of protest, written by a women’s rights activist, which called the attention of the media to this issue.

In the early days of this controversy, a few of the more famous reformist newspapers, such as Sharq Newspaper, thought that marriage between a foster father and his adopted daughter had been previously banned in Iran. Parliament, with its majority of Principlist members, had tried to amend this law.

In mid-February 2013, an act was passed by the parliament on "Protection of Children and Adolescents with no guardian (adoption)." In the original act, approved by parliament, marriage between adopted children and their parents was completely banned and it stated that if a foster parent decided to marry his or her adopted child, custody of the child would be taken away from the foster parent.

The Guardian Council, however, claimed that this bill was against Sharia and returned it to parliament.

The issue stems from traditional and conservative families, in which the adoptive daughter, since she is not related by blood, would have to wear a veil in the home around her adoptive father. Also, adoptive mothers would have to wear the veil around their adoptive sons. Typically, reciting a prayer would have addressed this issue.

Because the Guardian Council denied a bill allowing an official ban of this type of marriage, parliament modified the original bill so that marriage between foster parents and their adopted children could take place, however only if it were approved by a judge. Also, according to Title 27 of the revised act, marriage between adopted children and their foster parents could only take place if it were requested by the State Welfare Organization and approved by the court. The Guardian Council has not yet voted on this revised bill.

Despite the fact that parliament initially intended to pass a bill to avoid abuse, many have criticized it for taking up and publicizing an issue that is extremely rare in the country.

A jurist in Tehran said to Al-Monitor, “Marriage between adopted children and foster parents was never banned. There are a lot of absurd laws in the Sharia that no one has ever heard about and no judge ever comes in contact with. It is like opening a can of worms! Until today, no foster parent knew that he could marry his adopted child. Parliament had no reason to feel there is any necessity for such an amendment.”

He is very angry at what he calls “the stupidity” of parliament and says: “Publicizing this issue has serious consequences for families with adopted children. Nothing is normal anymore. Everyone is now being viewed as a potential sex partner by everyone else."

Parliament, however, contends that this has been a serious issue and they could not have allowed the old law to continue without revising it, if only out of respect for public sensitivities. People such as Mohammad Nafriyeh, the vice president in charge of social affairs for the State Welfare Organization, defends this law and considers it a step forward. “Unlike what is being said these days, this amendment in fact puts a stop to the possibility of marriage between foster parents and their adopted children. Previously, however, there was no legal restriction regarding such marriages. This is a step forward.”

Another jurist who is critical of this new legislation told Al-Monitor, “The rate of marriages between foster fathers and their adopted daughters is one in 1 million. What does this mean? It means that there was no need to create such mental disaster for thousands of families regarding an issue that only happens one in 1 million cases. Yes, if these marriages were the norm, then this amendment could have been considered a step forward. However, given the current circumstances, how can this be considered a step forward?”

But this argument was rejected by Mohammad Nafriyeh. In an interview with Iran Labor News Agency, ILNA, he said, “As vice-president of the State Welfare Organization, I can tell you that such marriages are not as rare as one might think. We have had cases like these in the past and based on the information that I have, I consider this amendment to be a step forward which can reduce the number of such marriages in the country.”

Alvand said that the rate of adoption increased by 14% during the previous year. These numbers showed that toughening the law regarding the marriage between foster children and their adoptive parents has not decreased people’s desire to adopt children.

Neda is the pseudonym of a 24-year-old who was adopted when she was three years old. She does not want to discuss this new amendment and only calls it “disgusting.” She says that she knew there was no restriction on adopted fathers marrying their foster daughters but this never occupied her mind or that of her father. “As I constantly see all the news coverage regarding this issue, I get really annoyed. How backward can these people be?”

In the absence of any statistics released by the State Welfare Organization regarding the number of marriages between foster parents and their adopted children, the society hardly believes that the parliament restricting marriage between a foster father and his adopted daughter is any kind of reform or a step forward. Alireza, a 50-year-old man who is the manager of a restaurant, says: “This is legalizing incest. It is really dirty.”

It appears that the complexity of the laws in Iran, and the fact that many of them have their roots in the rules of Sharia, have created a crisis between pro-democracy forces and more traditionalist conservatives. In fact, those who oppose this amendment are aiming for the complete eradication of the possibility of marriage between adopted children and their foster parents.