In a historic ruling, the Supreme Court of Appeals in Ankara upholds the heavy prison sentences to top ex-officers accused of attempting to oust the government in 2003. 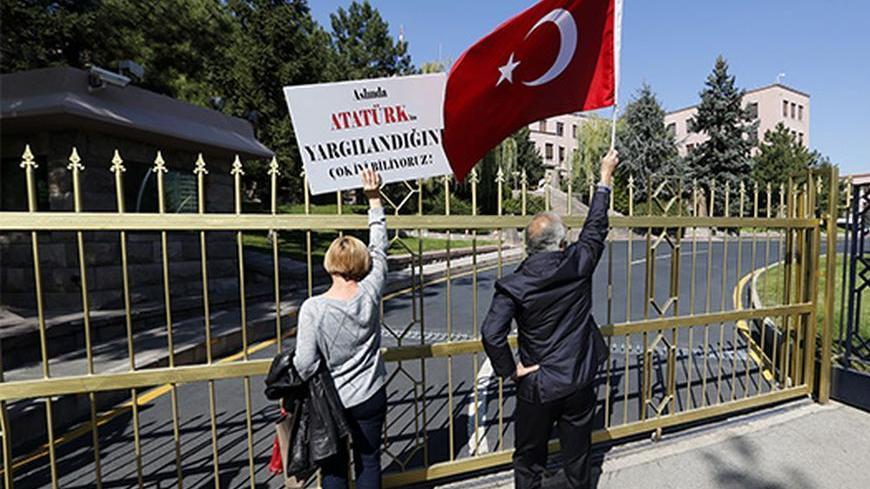 Relatives of detained military officers stage a protest in front of the Chief of Staff Headquarters in Ankara, Oct. 9, 2013. - REUTERS/Umit Bektas

In what appears to be another historic ruling, Turkey’s Supreme Court of Appeals upheld the convictions of top ex-officers in the much debated Sledgehammer case. The trial, which started in July 2010, was based on accusations of an attempt at "toppling the elected government and parliament by force" and involved 361 indictees.

This is the first time in the country’s history that a legal case against a coup reached a higher stage, possibly indicating the course of a larger conspiracy case involving a Mafia-like political network, the Ergenekon. The ruling in Ankara will also intensify the public debate on the future of politics of Turkey, on its rule of law and on civilian-military relations.

The ruling of the court’s Ninth Criminal Chamber, taken unanimously, means that 36 high-ranking suspects, including the ex-commanders of the navy, air force and Istanbul-based 1st Army of the Turkish Armed Forces (TSK) will serve 20 years in prison. Another group of top generals, who at the time encompassing the "acts of crime" were sentenced to 18 years in prison, while 214 suspects’ convictions and 16-year prison terms were also upheld by the court.

Sledgehammer was a coup plot based on a high-level military meeting, held at 1st Army Headquarters in 2003. According to the plan, the military was to systematically foment chaos in society through acts of terror. The plot, according to the indictment, sought to undermine the government, laying the groundwork for a military takeover. The case was built on a dense variety of evidence, including sound recordings, witness accounts and digital material.

At the core of the indictment was a presentation given by Çetin Doğan, then commander of the 1st Army, on March 5-7, 2003, held at the Selimiye barracks. According to the court, the conference, part of a series of regular ‘War Seminars’, a simulation exercise, in which military officers brainstormed using case studies, was far from a “routine scenario,” and in fact involved a coup d'état plan with real names affiliated with the ruling AKP.

The court decision was met by fury among the relatives of the accused. As the announcements were being made, some of them wept, some had a nervous breakdown. "Justice and law is finished in Turkey," said Nilgül Doğan, wife of Çetin Doğan, the top figure of the case. "The only shelter fıor us is now the divine justice. The pain will spread to the children and grandchildren. The entire world sees that we live in a country where there is no rule of law."

Regardless of the political vantage point, the Sledgehammer case had awoken huge hopes and concerns at home. In a country where the civilian political classes, despite being elected by a free vote, had to operate under the yoke of the powerful military, which intervened in politics fully or partially four times, it's full of symbolism to cement the superiority of civilian rule above the iron fist. Yet, the 3-year-long case was also a battlefield for the sides who fought fiercely to prove or disqualify the evidence.

Was the significance of the case based on its being a "first" of its kind?

"Yes," answered Doğan Akın, editor of the T24 news website, "But there is also another very important consequence. This case and others, which are about the intentions for illegitimate interventions into civilian politics, mean a lot for deterrence for the tradition of military coups. They mean a lot for building a resilient democratic order. But this does not diminish the fact that such cases demand outmost judicial care, to stave off doubts."

Has justice been done? Reactions were mixed among legal experts here.

Taha Akyol, a columnist with the Hürriyet daily, said: "The high court therewith acknowledges that an attempt to coup was a reality."

Rıza Türmen, MP of the main opposition Repulican Peoples' Party (CHP) and an ex-member of the European Court, called the rulings "a disaster," adding: "From now on, anything can happen to anyone. The high court has now become an accomplice to the lower ‘special court.’ I find this frightening. Saddening. It shows bluntly the state of the judiciary in Turkey."

Erdal Doğan, a renowned human rights expert and lawyer at the Malatya "missionary massacre" case, was keen on explaining that a deeply inherent pattern at the Supreme Court’s 9th Chamber had changed with this verdict.

"This chamber was noted well for its verdicts that had been in accordance with the uniformal, Kemalist state ideology," he said. "But this case has displayed unique features. There are such nuances in the rulings that the court apparently was meticulous in details. It did not issue a full package of verdicts. It seems to have looked into the ‘individuality of punishment’ and went person after person. It did overrule all the allegations that some of the evidence was fabricated. The ruling is a recognition of an attempted coup."

The case is far from being over. The defendants are most likely to appeal the verdicts first at the Constitutional Court and, if still unsatisfied, to the European Court of Human Rights. But the political repercussions of the case will shed light over the coming years. "The ruling will neither make the current polarization worse, nor help reduce it," Akyol said. "The only way out would at the end of the day be a general amnesty. But I do not see it happening on foreseeable future."

"Turkey’s nationalist circles, which defend the status quo, had tied far too many hopes to this trial," Doğan said. "In their overzealous mood, they did their best to instrumentalize the law, but failed. The government must draw correct conclusions also, and attack all the dark political crimes against the people of this country. This will be its sincerity test. And at the end, I see a path leading to a social consensus, with an amnesty, in some years."