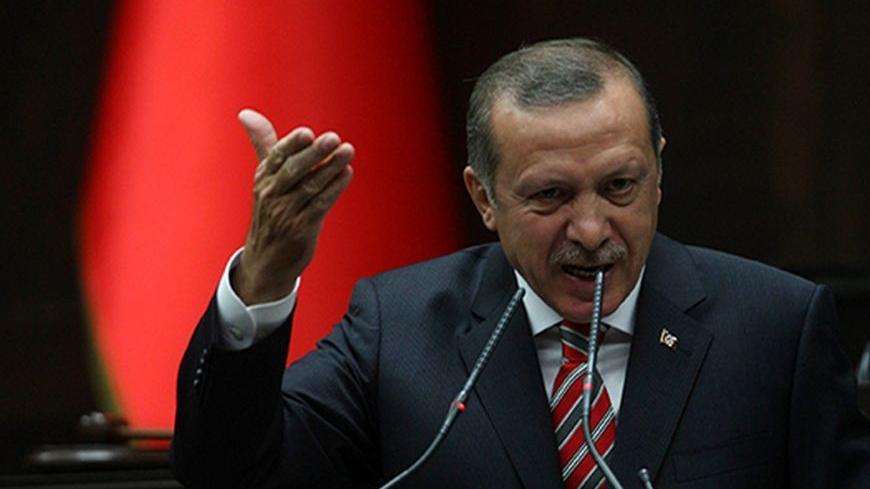 Prime Minister Recep Tayyip Erdogan has come out with harsh remarks aimed at US Secretary of State John Kerry for saying it was to Syrian President Bashar al-Assad’s credit that he is complying with the Russian-US-brokered plan for destroying Syria’s chemical weapons.

Erdogan also stepped up his angry remarks aimed at Assad, with whom he has been exchanging barbs, calling him a “terrorist.” His remarks came after Assad accused Erdogan of being not just a liar but also responsible for the deaths of thousands of Syrians and causing regional instability by supporting terrorism.

Speaking to reporters in Bali during an Oct. 7 joint press conference with his Russian counterpart Sergey Lavrov, Kerry said it was “extremely significant” that the Assad regime had started destroying chemical weapons under UN supervision within a week of the Security Council unanimously adopting a resolution.

"I think it's also credit to the Assad regime for complying rapidly, as they are supposed to," said Kerry. "Now, we hope that will continue. I'm not going to vouch today for what happens months down the road, but it's a good beginning, and we should welcome a good beginning."

These remarks were bound to go down badly in Ankara. The Erdogan government has demonized Assad to the extent that it is not in the position to accept even a hint of praise for him, let alone acknowledge him as an interlocutor in negotiations for ending the Syrian civil war. It did not take long for Erdogan to express this anger.

“How can we greet the actions of a person who has killed 110,000 people with praise? I ask you, how can such a thing be? Whatever the weapon is, whether it is chemical weapons or other kinds of weapons, is the result death? It is. So how can you send praise?” Erdogan told reporters following talks in Ankara with visiting Indian President Pranab Mukherjee.

He added that he did not think the US secretary of state could have uttered these words, which he said would amount to Kerry contradicting himself. This was a reference to when Kerry, like Erdogan, saw no place for Assad in any Syrian settlement. But Ankara has been watching with consternation as Assad successfully raises his international status through the diplomatic process spearheaded by Moscow and Washington.

It was only a few weeks ago, after chemical weapons were used in Syria against civilians, that a US-led strike against the regime appeared imminent. This pleased Ankara, which saw in it the beginning of the end for Assad. Turkey has been clamoring for an international military intervention against the Assad regime for more than  two years now.

Recently, Erdogan declared Turkey’s readiness to participate in any coalition that would mount an operation against Syria. The situation, however, turned rapidly and unexpectedly against him when Russia brokered a deal for Syria’s chemical weapons and the United States accepted. This resulted with the emphasis in Syria moving from the military to the diplomatic domain, which caught Ankara off guard.

It is clear, at this stage, despite all its initial reluctance, that the Barack Obama administration is inching toward acknowledging Assad as having a place in any Syrian settlement. Even the format of the proposed Geneva II talks, which Washington supports, attest to this, as the Assad regime will be part of the talks if and when they go ahead.

Erdogan, however, is finding it difficult to come to terms with this. He was also asked by reporters, following talks with the Indian president, what he thought about Assad’s much-publicized comments in a recent interview with the Turkish Halk TV network.

Assad had harsh words for Erdogan, bordering on the insulting, during the interview.

Claiming that Erdogan “was never interested in democracy or reform in Syria but merely wanted to secure the return of the Muslim Brotherhood,” Assad accused the Turkish prime minster of having “a closed and reactionary mind which does not recognize honesty.”

Referring to Ankara’s support for the Free Syrian Army (FSA), Assad claimed Erdogan had done nothing but support terrorism in Syria. He said this would rebound on Turkey, saying, “You can’t put terrorism in your pocket like a card because it is like a scorpion. If you put it in your pocket, it will sting you at the first opportunity.”

Responding to these remarks, Erdogan said he did not accept Assad as a political interlocutor any more and threw the charge of terrorism back.

“He is a terrorist engaged in state terrorism. This is how openly I say this. A person that kills 110,000 of his people is a terrorist,” Erdogan said, also expressing anger at Halk TV for interviewing Assad.

“It means they are prepared to go as low as to judge and bad-mouth the prime minister of their own country with this person who is involved in state terrorism,” he said, showing how much the Syrian issue has been politicized in socially polarized Turkey.

Halk TV is affiliated with the main opposition Republican Peoples Party, which has been calling for Assad to be part of any negotiation on Syria. The channel maintains a strong line against Erdogan and his Justice and Development Party, considering them major threats to secularism in Turkey.

Despite the exchange of angry barbs between Erdogan and Assad, and Erdogan’s moral indignation over Kerry’s praise for Assad, unexpected developments concerning Syria continue apace, leaving Ankara with no option but to watch as the diplomatic track unfolds. The possibility of an international intervention is very much off the radar at the moment and the Assad regime is increasingly confident that it will be part of any final settlement.

Assad is undoubtedly also noting with satisfaction the rising international concern that al-Qaeda-affiliated groups in Syria might grab the country to establish a regime that is no more democratic than the current one. That concern appears to have established a strange but unspoken coalition which includes the United States and Europe as well as Russia and Iran, who all consider Sunni fundamentalism a threat.

It seems, therefore, that the international option increasingly gaining ground for Syria is to go with the devil everyone knows. Erdogan’s angry outbursts ultimately represent no more than frustration over this, which Ankara seems to have no power to control.