The economic crisis caused by the Israeli-Egyptian siege on Gaza is not stopping local Palestinians from finding the festive spirit during Eid. 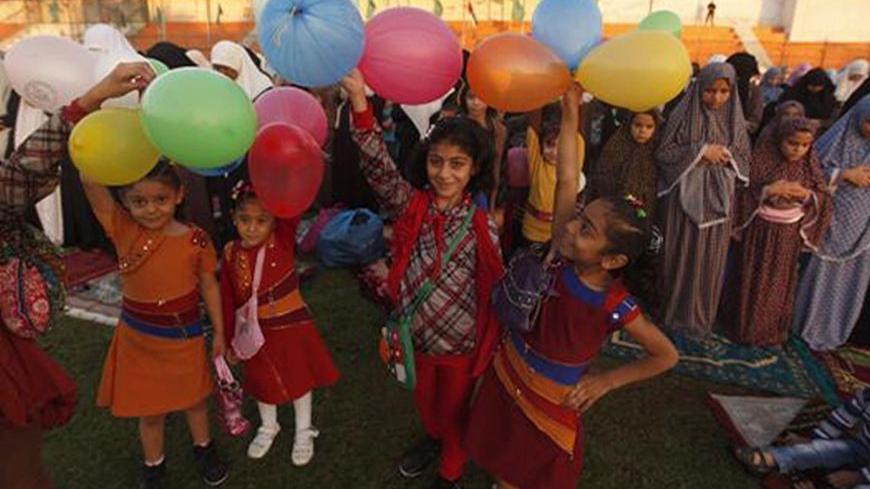 GAZA CITY — The Abu Khadra governmental building complex, destroyed by Israeli forces in the November 2012 war, has been transformed into an amusement park to usher in Eid al-Adha. Named “Freedom,” the park has been open since Eid began, although it was filled with children and families even before the holiday. The children play electronic games while others leap and jump on the inflatable moon bounce, having entered for free or with tickets that cost less than fifty cents.

A group of boys — Mahmoud al-Jaroushe, 15, Mohammed al-Aajle, 14, Rafic Irshi, 12, and Youssef Sakik, 11 — waited to get on the electric train ride. “We are very excited to spend every day of the eid here. There are so many games, and it is not far from our houses,” Jaroushe told Al-Monitor. “The amusement park is usually farther away, so we [would normally] spend the eid in restaurants. This year, however, it is close by,” Aajle noted.

The friends are worried, however, because they did not receive the money traditionally given during the holiday. “Everyone knows this eid is a holiday for meat, where we all slaughter sheep, but will not celebrate with money.”

Ayah al-Dayeh, 19, a young woman walking around the park with her friends, told Al-Monitor one of her desires — “an amusement park for girls so that we could relax and enjoy ourselves as we wished.” Her friend Manal al-Bahtiti, 19, concurred. “We girls, we need to be able to let go and unwind, to run and play. Why are children given such priority?”

Their friend Safaa al-Zoq, 20, told Al-Monitor that they had stumbled across the park. “We noticed the amusement park on our way back from the university and were surprised how the rubble had been transformed into a beautiful and brightly colored play area.”

Osama al-Safdi, the official in charge of the park, explained that the government had provided the land after the rubble from the strike had been cleared away. In exchange, Gaza City was to install games and rides during Eid al-Adha and open the space to the public for a small entrance fee and at no charge for the families of martyrs and the injured.

Eid al-Adha begins with the slaughter of a sheep, cow or calf on the doorstep of one's home or in another place allocated for it. The meat is distributed in accordance with Islamic law, with a third given to the poor and a third to relatives. The person who slaughtered the animal keeps the remaining third.

There are several farms from which to buy the animals. People purchase them live and keep them in their homes for a day or two before slaughtering it on one of the three days of the eid, usually on the first day.

At his farm in the Zamo region, near the border with Israel, Mohammed Hussein Abdullah is trying to get a bull into a truck for transport. It seems impossible, however, as each time the bull gets near the vehicle he turns around and refuses to allow anyone to approach him. After several attempts, the bull leaves the pen, but instead of heading toward the truck, he begins to make his way toward the door. Everyone there runs. Some 10 men then surround the bull and yell at it until they manage to get it into the vehicle that will transport it to its end.

“Bulls are extremely dangerous,” the farm owner told Al-Monitor. “Last year, I broke both my arms because of a bull we were trying to get into the truck.” He also explained that yelling in a particular way can bring a bull under control.

“Throughout the year, we work to fatten and take care of the bulls to be sold during the eid season,” Abdullah said. He revealed that they are imported via Israel, most often from Belgium. Each year, they sell around 250 head of bulls and sheep. This year, however, they sold much less than they expected, only around 35, due to the deteriorating economy.

At the same farm, Abu Kamal Saleh, 60, pointed to a blond Belgian bull in the pen. “My sons and I bought this bull several days ago and weighed it at about 600 kilograms, at a price of $3,200,” he said.

One of the sheep at the farm was being packed into the trunk of a Jeep. It had been purchased by Om Imad Shehade, 50, who was accompanied by her husband. “We were unable this eid to buy sheep because of delays in receiving our salaries, so we shared the price with my elder sons, costing us $500,” she confided in Al-Monitor. Her youngest son, Mahmoud, 11, asserted that he would put the sheep on the roof of their home with the help of his older brothers as soon as they arrived. He would then buy barley to feed it.

Eid al-Adha for women in Gaza brings its own joys. Most women go to the hairdresser, where there are no men, so they can go out looking their best for the holiday. “I do not feel the holiday spirit until I've cut and dyed my hair,” Hanaa, a 22-year-old Arabic teacher, told Al-Monitor.

One beauty salon in Gaza City was bustling with women of all ages. “The salon is so crowded because in the days immediately before the eid, most women and girls want to dye and cut their hair,” Amany, a worker, told Al-Monitor. Only three employees were working that day, so women had to wait their turn.

Not far from the salon, Omar al-Mokhtar Street filled with families and other last-minute shoppers trying to find clothing at reasonable prices and in the right size.

The deteriorating economic situation due to the crippling Israeli and now Egyptian siege is forcing Palestinians to change their shopping habits. “Every eid is worse than the last one in terms of the economy as well as the social atmosphere. This year, the prices seem higher, making us buy from stalls where clothing costs half the price they do in stores,” Om Wassim related to Al-Monitor while out buying clothes with her two daughters Nadine, 13, and Shorouk, 20.

The streets of Gaza at night are as they are during the day. Roaming vendors fill the sidewalks and display their reduced-price goods. Occasionally, the light from the Freedom amusement park reflects off the vendor’s stalls in reds and yellows, giving the eid a certain joyful sheen amid trying times.