US Secretary of State John Kerry and Iranian Foreign Minister Mohammad Javad Zarif took the first step to reaching a deal by speaking together for half an hour yesterday. 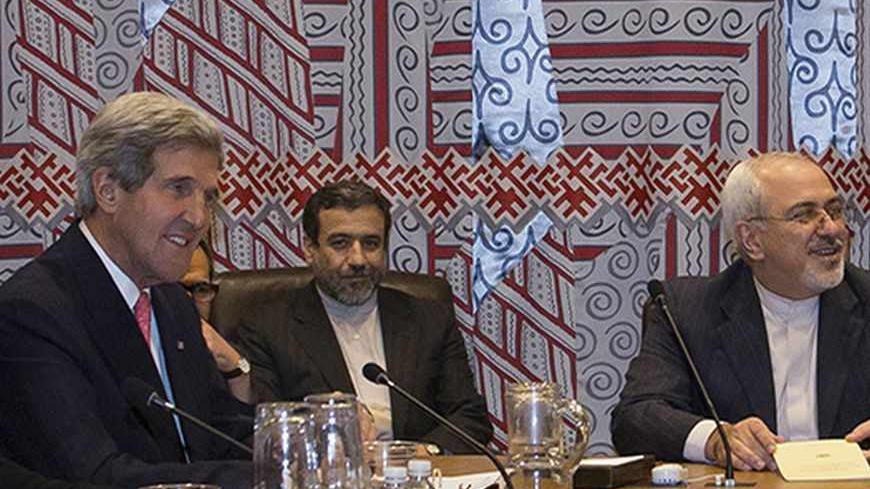 US Secretary of State John Kerry (L) and Iran's Foreign Minister Mohammad Javad Zarif (R) are seated during a meeting of the foreign ministers representing the P5+1, at UN Headquarters in New York, Sept. 26, 2013 - REUTERS/Brendan McDermid

NEW YORK — The United States and Iran made diplomatic history Thursday as Secretary of State John Kerry and Iranian Foreign Minister Mohammad Javad Zarif talked for a half hour on the sidelines of a multilateral meeting on Iran’s nuclear program.

The meeting, which Zarif described as “more than a chat,” took place at the United Nations, and marked the highest-level and most-substantive encounter between officials of the two sides since the 1979 Islamic Revolution.

Zarif made the announcement at a gathering of think tankers and journalists addressed by Iranian President Hassan Rouhani. The comments upstaged the president, who, when asked his reaction, told his interlocutor, Josette Sheeran, president of the Asia Society, “You ask for the first step. They [Kerry and Zarif] took it.”

Afterward, Zarif told Al-Monitor: "I'm optimistic. I have to be. Political leaders need to be optimistic about the future and make every commitment to go forward for the cause of peace. This was a good beginning. I sense that Secretary Kerry and President [Barack] Obama want to resolve this."

The only previous meeting between a US Secretary of State and an Iranian foreign minister since the 1979 revolution took place in 2004 when Colin Powell and Kamal Kharazzi exchanged courtesies at a dinner. Condoleezza Rice, Powell’s successor, made several attempts at such encounters but came up short.

The Kerry-Zarif meeting took place two days after Rouhani shied away from a handshake and chat with Obama at the United Nations, where both were attending the General Assembly's annual summit.

Since he was elected in June, Rouhani has promised to resolve the nuclear issue and has shown his commitment by giving responsibility to the foreign ministry under Zarif, a US-educated former Iranian ambassador to the United Nations. Rouhani said Thursday he hoped for an agreement within a year, "the sooner the better."

Speaking after the session with Zarif and top diplomats from the United States, Britain, France, Germany and Russia and China, British Foreign Secretary William Hague said that the so-called P5+1 had agreed to meet again within three weeks to try to end a long stalemate in the talks. A senior State Department official told reporters later that the next round would take place Oct. 15-16 in Geneva.

“We’ve all established good working relations with him during this week in New York and this meeting was a reflection of that. We have often sought reaching a peaceful and negotiated solution on this issue and our commitment to seek to do that and so the tone and spirit, as I say, was extremely good. There has been agreement on detailed negotiations to take place within the next three weeks and so we will all take that forward energetically and I think this has been a good start to that."

“We had a constructive meeting, and I think all of us were pleased that Foreign Minister Zarif came and made a presentation to us, which was very different in tone and very different in the vision that he held out with respect to possibilities of the future," Kerry said.

"I have just met with him now on a side meeting, which we took a moment to explore a little further the possibilities of how to proceed based on what President Obama laid out in his speech to the General Assembly earlier this week. And so we’ve agreed to try to continue a process that we’ll try to make concrete, to find a way to answer the questions that people have about Iran’s nuclear program."