On Turkey-Syria Border, Despair Over War

Syrians in Antakya are pessimistic about the future. 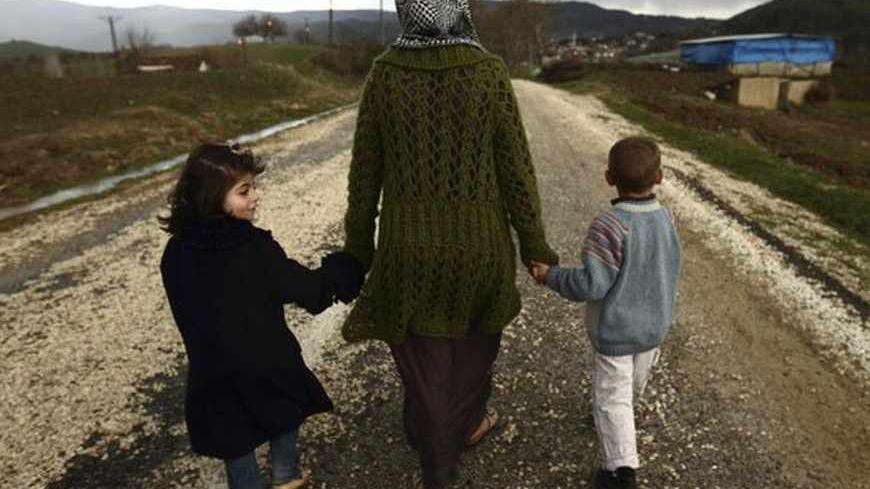 Syrian refugees walk outside the camp near the Turkish-Syrian border in the southeastern city of Yayladagi, just south of Antakya, Feb. 16, 2012. - REUTERS/Zohra Bensemra

ANTAKYA, Turkey — It would have been unthinkable to visit Antakya without stopping at Çınaraltı Künefe shop. So I did make the time to treat myself last week during my travel to the Hatay region. I discovered Yusuf Usta’s place in my previous travels there. It’s a tiny little shop at the old bazaar, where two or three people run the whole show. They make their own shredded phyllo dough and the fresh cheese, which are künefe's main ingredients, besides sugar for its syrup. What makes Usta's also special is that it’s cooked over charcoal, which easily makes it a winner for all those künefe lovers.

While I was enjoying myself watching how it was made, I noticed a man at the next table, in his 60s, with gray hair, sitting alone and somehow not looking well. I asked him in Turkish whether he was feeling all right. He looked back at me, immediately shifting his expression to a smiling one, and thanked me for asking. That is how our conversation started with Ali Bey.

He was a Lebanese man who became a refugee in Germany during their civil war with his wife and two children. He was visiting his aunt here in Antakya, who fled to Turkey for safety with her whole family, including granddaughters and grandsons — bringing the total to 17.

“I remember the first night when we found ourselves in Germany. I cuddled with my wife, and we cried together until the morning. It was long ago, but it hurts to see my aunt here in this way,” Ali Bey said softly, still speaking in Turkish. I asked him how he spoke Turkish so well. “My boss is a Turk in Germany. They have been our family for almost three decades now,” he said.

The relatives are not staying in a refugee camp. “They live in a rented house,” Ali Bey said. “But how long could you survive on your savings and take care of 17 people? The kids need to go to school, and they can’t be enrolled in schools here.” He added: “Turkey is doing its best, but it can’t provide the same opportunities to refugees like European countries do. And it may be unfair to expect it from Turkey, too.”

As we started eating our warm, newly cooked künefe while sipping our tea, a few more Syrians joined the conversation. It was evident that they were from upper middle-class Sunni families in Syria. They spoke English well, but all looked like sort of lost. They all wished that the civil war would end, and that it would become safe for them to return home. Although none were critical about Turkey’s political and diplomatic policies toward Syria, they also said that Ankara has not been part of solution to this crisis.

“Leadership is not only about when you make a hard decision,” Husnu, a Syrian in his 50s, told Al-Monitor. “Leadership is actually when you take a story to help the masses with it. And there is no leadership here.” He was referring to the Turkish Prime Minister Recep Tayyip Erdogan’s government. He did not argue that Erdogan’s approach to Syria has been a failure or out of touch with facts, or a mistake. He simply argued that Erdogan did not understand Syria from the very beginning.

“The way how [Syrian President Bashar] al-Assad was installed was inorganic,” he said. That was a reference to the change of the Syrian leadership after his father, Hafez al-Assad, died in 2000. “You would not call anything about him and his policies as opening up. We reached the point where corruption was high; the old guard around Bashar and the mentality that dominated them was so deeply entrenched that even if he wanted to make reforms, he would not be able to do that. It’s about him. You have to take all those circles around him into consideration as well. And Turkey probably failed to understand the complexities of the Syrian regime.”

Another Syrian jumped into the conversation. He first started talking about how his Turkish neighbors here were all treating them in kindness, and that they were doing their best to make them all feel at home. “But,” he said, “this is not our home. I know it’s difficult to please people. One group complains about anything and everything about Turkey. Another group expresses appreciation and gratefulness. These are all natural things. It happens. But what is it exactly we’re talking about here?” He answered his own question: “Whoever thought they could take the regime down, they did not. They actually took down the government. We have no government in Syria today. All civil works are at a halt. Ministries don’t work. Yet the regime exists. So I applaud the people with this vision who believed they would be able to remove the Assad regime. You knew all along if you [defied] the regime and its apparatus, you thought you would remove them. You had 2½ years. And we have no schools, no electricity, no water.”

As we were all about to finish our künefe slices, Husnu had the last word. “I heard your question asking about whether we’re for or against any potential military strike in Syria. I tell you, I am indifferent,” he said. “Nobody knows what happens next in Syria. It’s impossible now to figure out who is who. There is no one to trust on the field. The opposition is a mess, and it’s not possible to expect them realistically speaking to get their acts together to present something reliable for the day after. And no one should blame them for that. They have been oppressed for far too long, or have lived abroad for more than enough years.” He added: “The thing is, no one now has a clue how to correct this mess at hand. So, the question is, how do you deal with it? No one yet knows the answer to this question.”