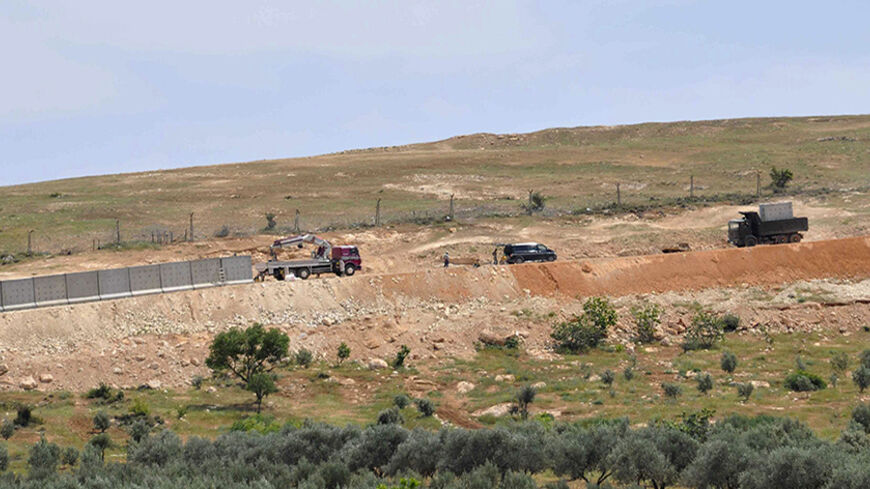 Concrete slabs are placed on the Turkish-Syrian border during the construction of a wall in Reyhanli, southern Hatay province, April 28, 2014. Turkey has started building a new wall along a fragment of its southeastern border with Syria as it struggles against smuggling, illegal migration and the threat from al-Qaeda fighters among Syria's rebel ranks. - REUTERS

ANTAKYA, Turkey — For the past month, the news media have monitored the battle for Kobani — the Syrian town with a majority Kurdish population — from the southeastern border town of Suruc. From there, the media have also covered the Kurdish protests in Turkey that have left 40 dead. Yet, in the Turkish province of Hatay, about a 4-hour drive from Suruc, residents kept silent on both matters.

This province, which received the first batch of Syrian refugees, is unique for its diverse social fabric that includes Arab Alawites, Sunnis, Christians and Jews. Here, the groups live harmoniously and respect each other’s customs and traditions. This multicultural society has high rates of literacy and an overwhelming number of doctors and lawyers.

“This silence here is, indeed, a mirror of Syrian sectarianism and proof that it found reception on this end, too,” Huseyin told Al-Monitor. “Just as our proverb says, ‘Let sleeping dogs lie,’ people here wonder why Kurds did not equally care about what happened in Kassab. Why haven’t they been more vocal for all that has been going on in Syria for about four years now? The Turkish government was wrong then, too.”

He said, “Kurds were wrong to keep silent then, and people here are wrong today to be cold toward Kobani. More and more people focus exclusively on their core community’s interests, turning their backs on others. The Alawites marked the 'peace day' [Sept. 21] here this year by carrying [Syrian President Bashar al-] Assad’s picture. To them, he fell victim to an international conspiracy and is fighting for his country.”

A year ago, Syrians — and cars with Syrian license plates — were more visible in Antakya's downtown. “The security took all the poor Syrians sleeping in parks, or begging on the streets, to the camps. People really had it with them. There are still instances of robbery and abuse of our women, but it is now better under control, when compared to last year,” said Sema, a shopkeeper at the Long Bazaar, or Uzun Carsi.

Minorities in Antakya, such as the Christians and the handful of Jews, especially, share the same concerns on security issues. Speaking to Al-Monitor on condition of anonymity, many residents said that the last time they were targeted as a result of their identity was in the years prior to the 1980 military coup. "We don’t have any problem here with the locals. It is all us," a member of the Jewish community said. "But there are so many Syrians here, and you see them walking around with long coats hiding their weapons. If one psychopath comes and kills us because we are Jews, who could say a thing? No one can give any guarantee here any longer that this is a safe place."

Bedia, from Yayladagi, a village near the Syria border crossing, said the sounds of fighting and bombing have not ceased since the beginning of the war across the border. In her late 60s, she sounds resolved but concerned. “There seems to be no end in sight to this war. I milk my cow; make cheese, butter and all of that. Our chickens make good eggs, too. It is all fine, but they don’t like to pay for them. Our order here is gone,” she said. Yayladagi is about 45 kilometers (28 miles) from Antakya's city center. The other side of the border is controlled by the regime’s foot soldiers.

People’s sense of security wanes significantly, however, when talking about Reyhanli, which is about 42 kilometers to downtown Antakya, with a population of 91,000.

“I used to live in Reyhanli, but I can no longer let my family sleep there,” Dogan told Al-Monitor. “We moved to Antakya and have tried to make a life here. I don’t allow my wife and my daughters to go back there to see their friends.” Sema, the shopkeeper, echoed a similar sentiment. “My daughter was assigned to a school there, but I told the authorities here that she would either lose a year and not go to school there, or that they should find her a school here in Antakya. It worked, and she is now going to school here.”

Reyhanli is an interesting place. While driving into town, I saw a woman in her 30s wearing pink trousers, a black top and black high-heel shoes. After being welcomed to town in such a fashionable way, it was difficult to fathom that Reyhanli was a place where extremists could breathe easily. “All these groups like the Islamic State (IS), Jabhat al-Nusra and what not, come and go through here,” a Reyhanli resident told Al-Monitor, asking to remain anonymous. “Take Mustafa Demir. He is from here. But IS has given him an emir position in Raqqa. He just told me the last time he was here that I should join them and that they would make me an emir, too.” The same Reyhanli resident added, “He has some presence here. He says that neither he nor anyone else should pray behind an imam being paid by a secular state.”

The Reyhanli streets are wide, quiet and clean. The main street is named after the republic’s founding father, Mustafa Kemal Ataturk. The local security directorate can be found on this street. “Do you see this barber shop?” a Reyhanli resident asked Al-Monitor. The barber shop is about 300 meters (984 feet) away from the security directorate. “That barber’s name is Omer Demir. He is the IS recruitment officer here. If you are going to join them by going through Turkey, here is the first contact you make with IS.”

Reyhanli residents talked about an incident that took place about three weeks ago. A mother from a well-known family came to the barber shop and broke all its windows. “Her son joined IS and she took out all her anger on Omer. That was a big event,” a Reyhanli resident told Al-Monitor, asking to remain anonymous. “Omer reported the incident to his higher-ups in Syria, and about 30 to 40 IS militants crossed the border to here. They declared the whole family infidels. They were going to kill them all. People in town got scared. A top security official from the Adana counterterrorism department came here with his crew. They talked to the people and brought the situation under control. But then we learned that there are seven sleeper cells here, and that they are all closely monitoring them, as well as Omer’s activities.”

Al-Monitor asked to interview both the barber and the mother. The barber said he would get back to us — he needed to consult with his superiors in Syria. His answer was negative. IS, unfortunately, also warned the mother not to talk to the media. Al-Monitor did find out that this mother took her son back and does her best to keep him alive. There are other family stories that are near impossible to verify. But it's clear that some people became accustomed to crime, and normalized this cruelty as a part of life.

“Even the imams here follow their orders and make announcements as they wish,” a Reyhanli resident told Al-Monitor. “You need to be careful here. No one knows who is who.”