The Aramaic-speaking  village of Maaloula, a symbol of religious and sectarian coexistence in Syria, has been invaded and desecrated by Islamist opposition groups. 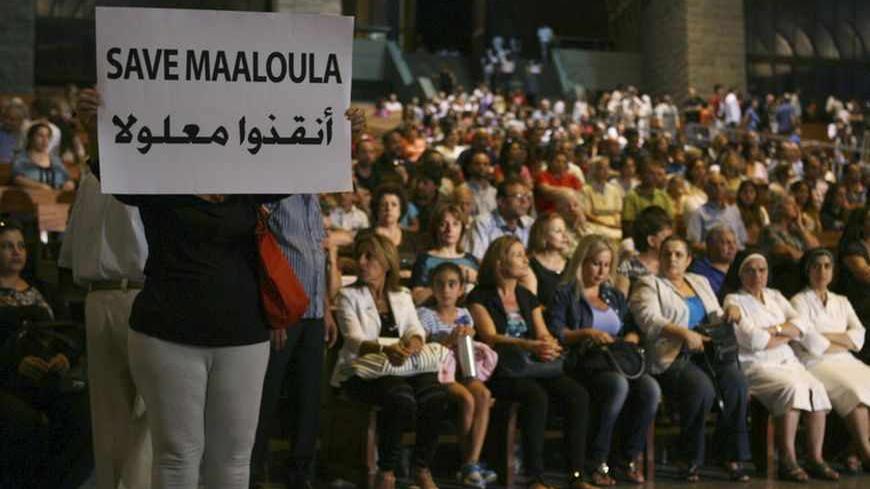 A Syrian woman holds a banner for saving Maaloula while Lebanese and Syrian Christian Maronites pray for peace in Syria, in Harisa, Jounieh, Sep. 7, 2013. - REUTERS/Hasan Shaaban

After the US Senate Committee on Foreign Relations approved President Barack Obama’s plan to strike Syria, armed extremist Islamists entered the Syrian town of Maaloula, located to the northeast of Damascus.

Maaloula does not hold a strategic position in the equation of the currently ongoing armed conflict in the outskirts of Damascus, which is aimed at gaining control of the capital. This town enjoys a remarkable historical significance, however, as it stands witness to the tolerance of Syrian society and its “Eastern civilization” — which traces its roots back centuries.

Maaloula is a historical town that symbolizes the Christian presence in the Levant. To this day, its residents speak Aramaic — the language of Jesus Christ. For centuries, Maaloula has maintained its heritage and embodied the presence of Christianity in Syria, despite the predominant Islamic characteristics the country took on following the Islamic conquests in Syria in 636. During that time, the most important caliphate in the history of political Islam was established: the Umayyad Caliphate, which inaugurated the establishment of the Islamic state.

In fact, the significance of Maaloula as the regime sought to present it in the past years does not contradict the historical course of positive interaction between Christianity and Islam in Syria and the majority of the Levant region. Since the times of the Byzantines, prior to Islam, Christians have lived in the region.

Muslims of the Levant, notably Syrians, do not deny this historical fact. They rather highlight it as they affirm that Syrian Christians are partners in defending this land against the colonists and those seeking to subordinate it.

During the French colonization of Syria, churches and mosques were united over a national demand, calling on ending the colonization. Syrian Muslims call their Orthodox partners “the landowners,” in reference to the fact that they lived on this land before them. They also call them “cousins,” a term used in the East to designate fellow members of a big family, hailing from one ancestor.

During the storming of armed Islamists into Maaloula, in an attack they dubbed a “conquest” in reference to the era of Islamic conquests, they vandalized the church, considering it a “war prize.” This is also a tribal tradition that existed prior to Islam and was practiced by Muslims for a while during their wars to bribe tribesmen and talk them into accepting the idea of fighting Jihad with the prophet. Later on, the Prophet Muhammad set war standards, prohibiting the killing of captives, the burning of trees and ensuring the preservation of sacred sites of other religions.

However, in their fight against Christians, those attacking Maaloula are still implementing the old legacies of Islam in its early stages. Back then, the prophet was compelled to make concessions to gain the support of tribes in his conflict with the Quraysh — rich Arab tribes at the time — and those opposed to his call for Islam in the Arab peninsula.

Storming into Maaloula and calling upon its residents to convert to Islam as the only option to stay alive — only days prior to a possible US military attack against the Syrian regime — once again prompts questions about a potential alternative. While, according to the West, President Bashar al-Assad prevents the establishment of democracy in Syria, the Islamist opposition threatens —  if it were to usurp power — to destroy 1,000 years of religious tolerance in the Levant.