A close look at Middle Eastern media reveals a sectarian bias for regional audiences and a more democratic face when broadcasting in English to the West. 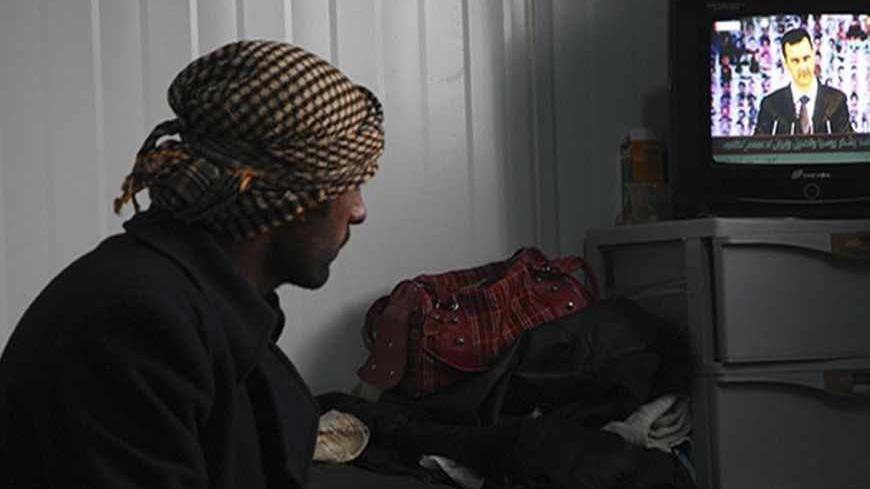 A Syrian refugee watches a broadcast of Syrian President Bashar al-Assad speaking in Damascus, at the Al-Zaatari refugee camp in the Jordanian city of Mafraq, near the border with Syria, Jan. 6, 2013. - REUTERS/Majed Jaber

The sectarian conflict in the Middle East is not just what we witness in the battlefronts. There is also a battlefield behind the scenes, in the media and entertainment industries. Although the battle of sectarian media has been rising the last two decades, the civil war in Syria has brought tensions to a new height.

The regional media battle is being waged by Iran, Saudi Arabia and Qatar, which tend to have similar patterns in both news coverage and historical/religious entertainment, albeit skewed by their own religious identities.

For example, a comparison between Al Jazeera Arabic and Al Jazeera English, or between domestic Iranian media (in Farsi) and the Iranian news channels in Arabic, such as Alalam, or English, such as Press TV, clearly demonstrates the difference between these two discourses. A general tone concerned with democracy and human rights is present in the channels with a foreign audience.

The same media, however, when producing content for a domestic audience, uses a different tone. This shift adds fuel to the fire of the religious conflicts in the region. For example, Al Jazeera English covers the news from Syria with a democratic concern and tone, and Iranian press covers the news from Bahrain in the same manner. Yet the domestic sections of each of these major news channels have a clearly different and much more radical tone when they address their domestic viewers.

The protests in Bahrain are portrayed by the Iranian media as the revolution of a majority Shiite population against a despotic Sunni minority, while the protests in Syria are portrayed as the rebellion of a minority terrorist group against the legitimate government of President Bashar al-Assad. The media outlets opposed to Iran portray the situation in Bahrain as the rebellion of a despotic minority, tied with Iran, that threatens the territorial integrity of Bahrain and the interests of the Gulf region in general. The same media portrays the Syrian conflict as the revolution of the majority against the brutal regime of Assad, who is being supported by the terrorist Shiite groups from Iran, Lebanon and Iraq.

In this media battle, purely religious concepts are also used in reporting on the current conflicts to imply different meanings, for the purpose of attacking the rival group.

The Salafist interpretation, which is connected to more to religious fundamentalism and not necessarily terrorism, is associated with the latter in the Iranian media in order to imply a connection between these two concepts and thus portray the Saudi Sunni rival as the terrorist front. “Shiite,” “Rafidah,” “Alawite” and similar terms are used by Sunni media in reference to the troublesome front of Iran (as far as these media outlets are concerned) in its vast area of influence, which includes Iraq, Syria and Lebanon.

The media war has a visual component, as well. While the Sunni Arab media is full of video clips and images showing Assad's army committing crimes against civilians, the Iranian Shiite media has focused its attention on the video clips and images showing the jihadists’ crimes against innocent civilians or prisoners of war. The continuity and acceleration of these conflicts have resulted in the rise of extremism in all sides, and blasphemy against the sanctities of both sides has become common and widespread.

In the ideological war of symbols and images, each hostile side uses historical revisionism in an attempt to revive long-forgotten vendettas and vengeful forces. Consequently, both sides have invested their full potential on producing movies and TV series to propagate their views.

In the past, the production and broadcasting of religiously unifying films and series such as “The Message” thrived. So did movies and series that served as reminders of Islamic civilization’s glorious past, such as the Iranian TV series “Ibn Sina,” the Arabic series “Omar Khayam” or movies concerned with anti-imperialistic revolutions in Muslim countries such as “Lion of the Desert” and “The Battle of Algiers.”

Today, however, more attention is paid to those parts of history influenced by religious demarcations and conflicts.

On the Iranian side, a series of productions such as “Imam Ali,” “Imam Hassan” and “Imam Reza,” with their Shiite Iranian and sometimes anti-Sunni views, have criticized and even ridiculed Sunni beliefs and sanctities, and the series “Mokhtarnameh” has clearly brought the old historical conflicts to the modern day. The broadcasting of this series in Iraq has greatly fueled the Shiite-Sunni conflict there. The Sunni side has reacted to the production of these Shiite Iranian series by producing its own series, such as “Umar ibn Al-Khattab” and “Al-Hasan va Al-Hussein.” The latter has been particularly criticized by Shiite as well as moderate Sunni groups for its focus on one of the most sensitive periods of early Islamic history and for portraying many of that era’s controversial incidents.

When comparing the movies and the series produced in both the Shiite and the Sunni media, we tend to see that both sides present their own versions of history through an extremely sectarian and xenophobic perspective. They do this by selecting their desired text from among the historical sources, manipulating the narrative as well as occasionally adding new characters and scenes to interest the viewers. Therefore, unlike movies such as “The Message” by Mustapha Akkad, which gained widespread popularity due to its focus on the shared history of Shiite and Sunni Muslims, these new series have been widely criticized by rival groups as well as historians.

In the Iranian side, we are simultaneously witnessing a strong focus on the role of the Iranian characters in early Islamic and Shiite history and the negative role of the Sunni leaders. Consequently, the other side is trying to present an image of friendship, free of any hostility and conflict, among the Sahabah (companions) of the prophet in order to weaken the Shiite viewpoint, which criticizes some members of the Sahabah. On the other hand, they also try to emphasize the Iranian origin of some of the infamous characters of early Islamic history such as Firuz, the assassin of the second Caliph, Umar ibn Al-Khattab.

History for Middle Eastern nations continues to be a powerful stimulus and generates fuel for regional conflicts and the map of their future wars. In the absence of moderate media and with escalation of sectarian propaganda, a rise of victims and massacres is expected in the years to come.