Twenty Years After the Oslo Accords! What Now?

With the Oslo Accords, there is the illusion of negotiations. 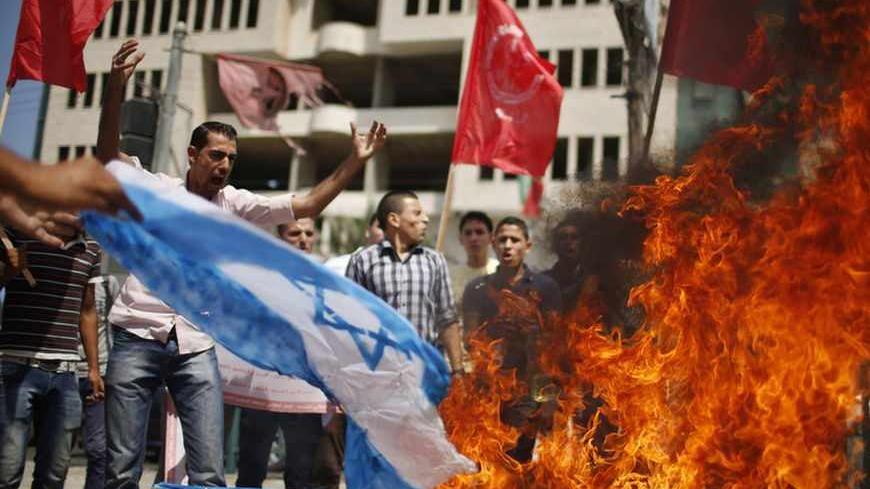 Supporters of Palestinian leftist parties burn a replica Israeli flag during a rally calling for the cancelation of the Oslo peace agreement and the end of the latest round of peace talks with Israel in Gaza City, Sept. 15, 2013. - REUTERS/Mohammed Salem

Twenty years ago, the Oslo agreements were celebrated on the White House lawn at the invitation of President Bill Clinton. Israeli Prime Minister Yitzhak Rabin, Palestine Liberation Organization (PLO) Chairman Yasser Arafat and their senior colleagues stood to confirm what was called the Oslo Accords.

On the day before, I wrote an article in the Arabic newspaper Al-Hayat titled: "To the Arab guests at the White House: 'If there is going to be a photograph please avoid smiling!'"

This article of mine was an expression of bitter disappointment because I perceived this to be a trap, one that would further complicate and delay a consequential outcome of a two-state system with East Jerusalem being the capital of Palestine.

Moreover, the bitterness was due to the fact that the Oslo agreement was accomplished in secret, simultaneous to the “negotiations” that were taking place in Washington with the Palestinian delegation headed by the late Palestinian statesman Haidar Abdel Shafi. There is no need to recite that at the time of the Oslo Accords there were at least 105,000 settlers in the West Bank. Today, there are more than 360,000 settlers there, and more than 550,000 settlers if ones in east Jerusalem are included. Israel has allocated about 40% of the West Bank for settlements and their expansion, in addition to army camps, areas of training, nature reserves and roads.

At this moment, not only are the Palestinian negotiators returning back 20 years to discover the historical trap that they fell into, but they are submitting to a so-called transitional peace agreement that does not include an instant halting of settlements. I remember the morning of the day when Oslo was to be declared at the White House. I took Abdel Shafi to Dulles Airport — to go to Chicago to visit his daughter — sad and disappointed at the failure of an outcome that was sidestepped by the Oslo agreement.

Throughout the negotiating process in Washington, Abdel Shafi insisted that any negotiation should start with Israel acknowledging that it is an occupying power complying with the Geneva Convention. Needless to say that his refusal to attend the ceremony at the White House was a clear indictment of the Oslo agreement, which I strongly agreed to and shared. At Abdel Shafi's insistence that all settlement activities have to cease, Israel’s response was: “This demand threatens the 'negotiations' of the final outcome." Nabeel Kassis, his then-deputy, also stated that Israel refused at that time — 20 years ago — to recognize the boundaries of 1967, adding: "Let us leave that to the final 'negotiations!'"

The Oslo trap put the Palestinians in a suffocated framework that has lasted until now, with ongoing settlement activities taking place not only in the West Bank, but also in east Jerusalem. After 20 years of Oslo, US Secretary of State John Kerry went around six times to rekindle “negotiations” again! This time with an enticement and promise of economic aid that might be forthcoming as an inducement to resume “negations.”

Because negotiations are not a fishing trip for the Palestinians to discover whether they have the right to an independent state with Jerusalem as its capital. Israel should admit, as I mentioned earlier, that it is an “occupying power.” Israel never admitted this, and that is why what is taking place today is an ongoing discussion where a credible outcome is on the verge of becoming an exercise in futility.

During the period since Oslo, many new terms were introduced into the discourse. One, for example, is “road map,” which now has been described as a road without a map. This was the term popular during Bush’s administration. Throughout these discussions we witnessed a great deal of semantic acrobatics, such as “freezing settlements,” which President Barack Obama requested from Prime Minister Benjamin Netanyahu two years ago, and which unfortunately Palestine Liberation Organization Chairman Mahmoud Abbas acquiesced to, notwithstanding that settlements cannot be “frozen.”

If there is a resumption of serious negotiations, settlements must be dismantled. The proof of the matter is that settlements were not frozen but continued to expand. Twenty years after Oslo, the enthusiasm of Kerry to bring about a solution — while momentarily focusing on the important Syria problem — must take into consideration that the West Bank is an occupied territory and that Israel treats the Gaza Strip, which by the way is an integral part of Palestine, as a "belligerent entity." If the United States cannot elicit a recognition that Israel is an occupying power, the serious negotiations, which he envisions to resume, will lead us to another 20 years of futile discussions.

On this occasion, Mr. Kerry, for God’s sake, no more Oslo!