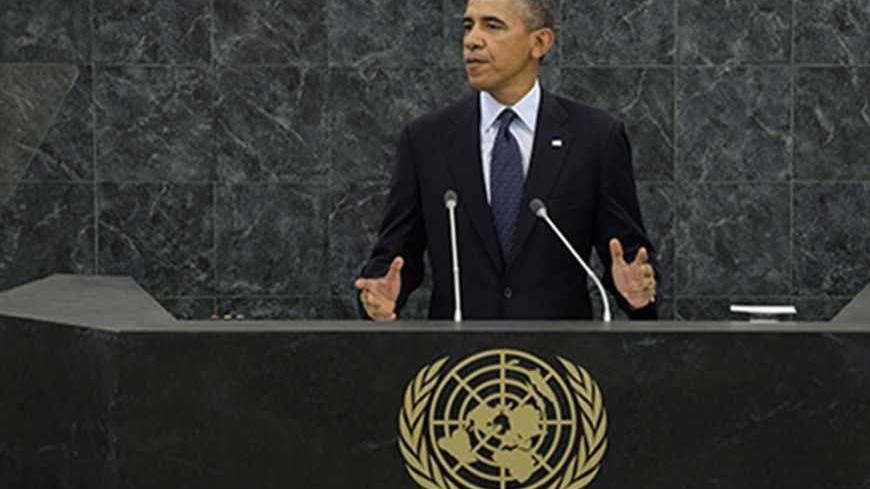 TEHRAN, Iran — “Fatwa.” That was the magic word in US President Barack Obama’s Sept. 24 speech at the UN General Assembly when referring to Iran’s nuclear program. When Obama turned to the fatwa, the so-called hard-liners in Tehran knew something serious was happening in New York. Obama may as well have said, “This can be our starting point.”

After the speech, an informed Reformist source reminded Al-Monitor, “The fatwa isn’t new, and Ayatollah Khamenei has highlighted it several times, as did the former president [Mahmoud Ahmadinejad].” Indeed, Iranian Supreme Leader Ayatollah Ali Khamenei issued the fatwa against the pursuit and possession of nuclear weapons on Feb. 22, 2012.

Assessing what Obama had done, the source continued, “But those at the top in Tehran believe Obama wanted to send a clear message to them — that the US is ready for the confidence-building process.” The source further explained that a decision had been made in Tehran, with the blessings of Ayatollah Khamenei, to seize every opportunity to respond to the issue of the nuclear program. He added, “Given that Iran has nothing to hide, mutual trust will certainly lead to a place where both Iran and the West can manage their differences.”

These differences have affected relations between Tehran and Washington since the 1979  Islamic revolution, and in fact, have grown with each passing year, until they became seemingly unresolvable, with both countries seeking to sabotage the other. No attempt to find common ground came to fruition.

“We are cautious about the whole situation,” a conservative source close to the establishment told Al-Monitor. “On several occasions the Americans weren’t truthful. On one occasion, we were about to arrive at some consensus with them in Germany. Our delegation was still at the airport when Saddam Hussein invaded Iran, with their blessings.” According to this source, every American move “should be taken with a good deal of prudence, because the whole issue of getting closer to them is like dancing with the devil.”

Despite the exchanged expressions of goodwill since the election of President Hassan Rouhani, and regardless of Ayatollah Khamenei’s new policy of “heroic flexibility,” skepticism continues to dominate conservative rhetoric in Tehran. One young, conservative blogger wrote to Al-Monitor, “How can we feel secure with the devil? We’ve always heard them say America is the Great Satan. Did this change today?”

Given that this view remains prevalent in Tehran, it is clear that building mutual confidence, from the Iranian point of view, will also have to involve the public. A change in policy has to be accompanied by a change in societal attitudes, in this case from viewing the United States as the “Great Satan” and chanting “Down with America” to  championing “Peace with America.”

What is obvious is that 35 years of hostility will likely need some 35 months of active goodwill to reach normalization. It may already be in the works. Large “Death to America” banners were nowhere to be seen at the Sept. 22 military parade commemorating the 1980–1988 war with Iraq. Only one small sticker of the famous phrase was seen to adorn a military truck carrying missiles. This might be an indication of a willingness to finally turn the page on US-relations.