Despite all the criticism leveled at Palestinian President Mahmoud Abbas, he still polls the highest among Palestinian leaders. 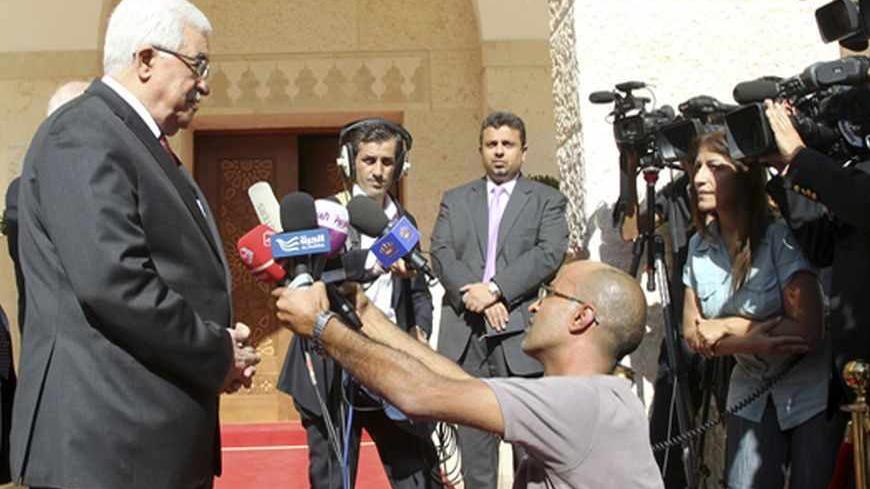 Palestinian President Mahmoud Abbas (L) speaks to the media after his meeting with Jordan's King Abdullah at the Royal Palace in Amman, Aug. 28, 2013. - REUTERS/Muhammad Hamed

A strange phenomenon exists in Palestine these days. Palestinian President Mahmoud Abbas, who is constantly attacked and criticized, continues to do very well in local and international polls, and his policies are generally well-regarded among ordinary Palestinians. What makes the Palestinian president such a Teflon leader, where accusations against him never stick and his popularity remains relatively high?

A simple search of social media will reveal a lot of negative adjectives associated with the Palestinian leader. He is called a traitor, Israeli puppet, sell-out, corrupt, unpatriotic, fraud and an unelected autocrat, among many other terms. Some of these accusations are at times publicly stated, as in the recent demonstrations staged in Ramallah against the peace talks. In speaking to his own Fatah leadership, Abbas even commented on the vile language that is being used in some of these public protests.

But for all this negative language leveled against the Palestinian leader, very little of it seems to stick. Public opinion polls consistently give Abbas high-performance ratings, and whenever he is polled against potential competitors, he and his Fatah movement have done very well. The latest poll conducted in August shows Abbas continuing to outpoll Hamas’ Gaza Prime Minister Ismail Haniyeh.

What is it about Abbas that makes him — much like his predecessor Yasser Arafat — a Teflon leader, where accusations simply don’t stick and the Palestinian public simply doesn’t buy it?

A closer look at criticism of Abbas shows that they fall into one of two main categories: personal integrity or political collaboration with Israel. Like Arafat before him, Abbas is not personally corrupt. He is neither known to have amassed great wealth from his position nor does he or his family lead a high-profile life of extravagance. Abbas' wife, Amina, rarely appears in public, and whenever they have been in pictures, Abbas seems to lead a pleasant but not a lavish family life. His children work in various business areas, and although some have tried to claim that they benefit from his power base, little evidence has been provided in this area. In fact, Abbas has legally pursued some media outlets that made personal accusations of financial gain by his sons because of his political position.

On the political level, the accusation that he collaborates with Israel has failed to translate to the ugly word treason. Palestinians living under 46 years of occupation are inclined to understand that there is no way he could operate without some level of cooperation with the Israelis.

Abbas doesn’t hide that he is opposed to a militaristic approach to resistance, and has in fact publicly convinced Hamas leader Khaled Meshaal to support his idea of nonviolent popular resistance. While one might claim that there is a difference between being for popular resistance and having security cooperation with the occupiers, the Palestinian public cognizant of the reality of life in Palestine seem to give Abbas and his security forces the benefit of the doubt. Many acknowledge that he has little choice but to have a minimum level of security cooperation with Israel, while pursuing a negotiated — and not armed — resolution to the conflict.

Politically, Palestinians also give Abbas a pass because of the regional and Arab reality. As they see the Arab world implode around them, many Palestinians feel that there is little more that the Palestinian leader can do with the cards that he is dealt. The division of Gaza and the West Bank, the apathy of the Arab world and the ineffectiveness of the international community are strong realities that people understand make it difficult for Abbas to lead a high-powered rebellious opposition to the powerful Israeli occupiers.

Some of the recent gains accomplished by Abbas, such as the defiant march toward recognition of Palestine in the United Nations and the recent release of long-time prisoners, give Abbas and his policies an advantage of sorts.

But perhaps Abbas’ biggest reason for political survival and popularity has little to do with him and much more to do with others. Palestinians see very little hope in Abbas’ opponents, whether Islamist or left-wing Palestine Liberation Organization (PLO) groups. Some independent voices have been raised recently, but none have emerged as a strong and reliable alternative to the current PLO leader.

Part of the problem is the absence of regular elections. But municipal elections in October 2012 as well as many elections on the level of university student councils and labor unions have failed to produce a strong alternative voice or leadership. Some efforts by young Palestinians appeared to be effective during the first year of the Arab Spring, but these voices have since died down.

Abbas and his party have certainly been in power too long and have little to show for their long years of leading the Palestinian people. Abbas publicly stated in 2011 he doesn’t intend to run for the position of Palestinian president whenever an agreement is reached with Gaza to hold elections, but he doesn’t appear to have slowed down or delegated his political powers to any individual or group.

The accusations leveled regularly against him might be unfair, but at the same time one can’t deny that they come from a frustrated public trying to hold their leaders accountable for a lack of progress in ending the occupation, and producing the elusive independent state that all Palestinians yearn for.