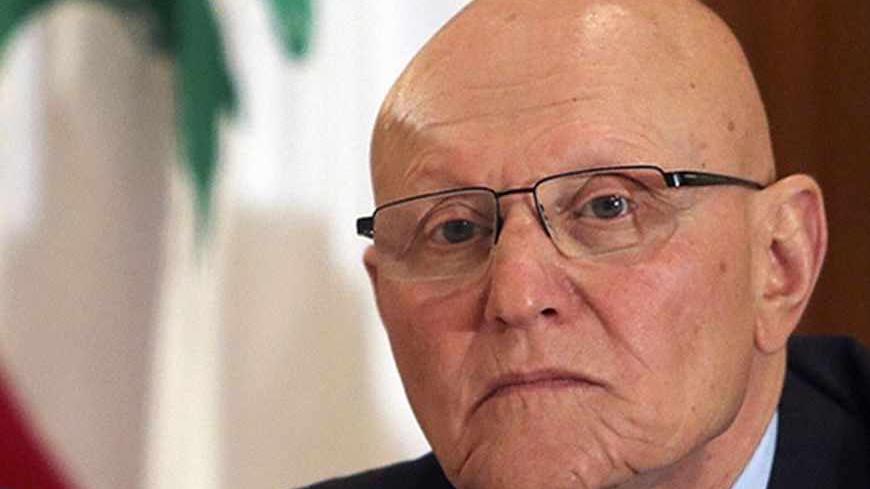 Political figures close to Lebanese Prime Minister-designate and Beirut MP Tammam Salam, who is in charge of forming a new government, confirmed that the next few days will witness serious attempts to accomplish this task, although there has been no tangible data on how this will be achieved.

In many ways, this issue is related to the pressure that has been placed on Salam. As it stands, the prime minister-designate holds a record in delaying the formation of a government, according to the records of Lebanon’s Second Republic, which was established based on the constitutional amendments passed in 1990.

Salam was designated the task of forming his new government on April 6, 2013, making it more than five months that his government has not seen the light of day.

Nevertheless, there are significant factors weighing heavily on Salam. The prime minister-designate has been pressured by Suleiman to form a government on the one hand, and by his allies, including the block of former Prime Minister Saad Hariri, on the other.

This is not to mention the difficult circumstances in Lebanon, which do not bode well in terms of security and economy. This is especially true as many vital sectors risk paralysis, such as the Lebanese gas sector, as its international tender has been delayed due the absence of a government that enjoys full constitutional powers.

It is worth acknowledging the stressful external conditions, in light of the Syrian war raging nearby and the Syrian refugees flowing from Damascus into Beirut, which have become a significant threat to the country, both socially and from a humanitarian perspective.

In addition, it should be noted that a few days ago, the process of forming the new government seemed to be going at the same hectic pace as events in Syria. Indeed, many well-informed politicians confirmed to Al-Monitor that those involved in forming the government were about to declare the formation of a new government with the anticipated American strike on Syria.

In the same vein, an MP close to Salam confirmed that in the wake of the explosions in Tripoli on Aug. 23, a government was supposed to be formed without taking into account the demands of a third political party, i.e., Hezbollah. In the midst of the bloodshed, which left 45 dead and hundreds injured, the opportunity presented itself as a means to break the impasse within the government, but concerned politicians remained reluctant to take action.

What matters now is that the wheels of negotiations are set back in motion now that the issue of domestic explosions has been settled and the external strike on Syria suspended.

It should be noted that Hariri’s bloc had imposed three conditions on Salam to form a government. First, Hezbollah is not to be directly represented by its party members. Second, Hezbollah and its allies are not to be granted a third of the new government’s seats, which would constitutionally it to be a minority capable of blocking parliamentary sessions. Third, the ministerial statement of the new government shall not include any text whatsoever providing the legalizing of Hezbollah’s arms as a resistance movement against Israel — a condition that was laid down by the governments of the Hariri family 20 years ago.

Hezbollah and its allies rejected the three conditions altogether. It insisted that the party will have to be represented by its own members through what has come to be known as the “blocking third,” and that the ministerial statement should provide for the “legitimacy of the resistance.”

This means the crisis reached a complete deadlock despite talks about minor changes in positions of some politicians, which failed to break the stalemate.

Apparently, this is what prompted Salam to seriously consider forming a new government without resorting to any other party, which would be a fait accompli imposed on everyone. However, such a step is likely to cause additional problems rather than offer real solutions to the crisis.

Such a decision is likely to fuel strife between Sunnis and Shiites in several areas in Lebanon. This is not to mention the possibility that the new government might not be able to rule. What if the new Shiite ministers decided to resign? Salam would also have to resign, as he pledged to do so should Shiite ministers withdraw from the government. Thus, Salam’s new government would resign before holding its first session.

Should this happen, a new legal dilemma would arise. Will the ministers of Mikati’s resigned government, who are currently in charge of managing the state’s day-to-day affairs, hand over their tasks and offices to the new ministers of Salam’s government, which might resign without holding its first session, even if this session was merely for delivering and receiving tasks? What if some ministers refused to do so?

Will Lebanon witness the existence of two governments, as was the case during the period from Sept. 23, 1988 to Oct. 13, 1990? This led to a series of domestic and external wars that ended with changing the constitution and the Syrian army’s invasion and occupation of the entire Lebanese territory.

These difficult questions further complicate Salam’s task and he is likely to continue to set a new record when it comes to delaying the government's formation.