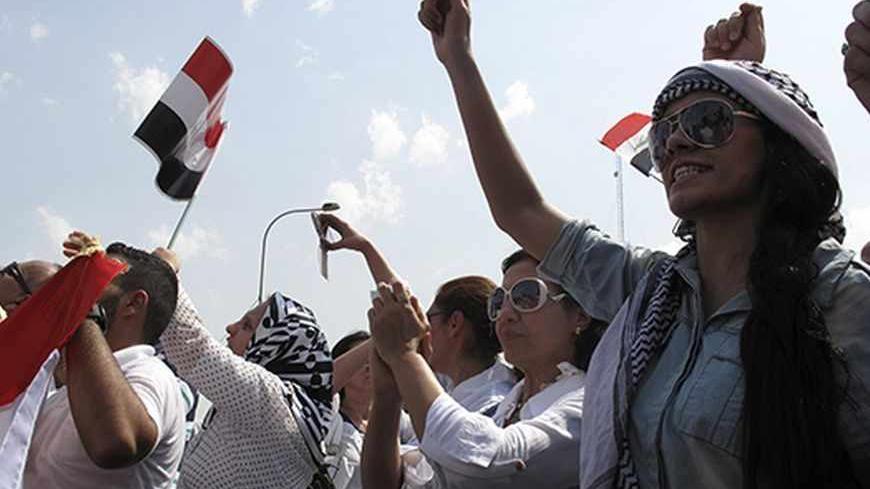 Protesters demand that the pensions of parliamentarians be canceled during a demonstration in Baghdad, Aug. 31, 2013. - REUTERS/Thaier al-Sudani

Observers of the Iraqi situation may be surprised by the rise to power of religious parties in the government established after 2003. They may even wonder where the secularists went. They also might ask whether these religious parties are representative of the real situation in Iraq, or if there is another, unseen group which has not yet found its way to the surface.

This issue should be considered in the context of the historical background of secularism in modern Iraq. Secularism was ideologically associated with the nationalist or left-wing model, which has attached to it the stereotype of being anti-religion. On the other hand, the huge failure of the previous regimes have left a bad impression of secularism, since it is somewhat associated to nationalist or leftist ideology in the collective conscience of Iraqis.

After 2003, secular figures were unable to create a societal current that was involved in the political process for various reasons.

First, the secular personalities participating in the political process after 2003 lacked any kind of efficient partisan organization and presence among the voting public. This led to their decline and elimination as soon as the electoral process began. On the other side, the religious parties have a long experience of party organization and popular support.

Second, the extreme sectarian divides in Iraqi society have led to the retraction of secularists or their fusion into the religious parties, having lost touch with the public. Their secular discourse runs contrary to prevailing sectarian rhetoric.

The secularists have had no financial support, neither from influential domestic sides nor from regional or international authorities — not even the United States. The latter, which had entered Iraq to spread democracy, did not care about matters related to the consolidation of democracy as much as it cared about the appearance of democracy, which failed to guarantee the stability of a true democratic regime in the country.

Nevertheless, there's a silent group that may form the nucleus of a strong secular current that may emerge in the future, one that will be able to join, participate in and change the political process. This has been apparent during the recurring protests that began two years ago in Baghdad and other cities throughout Iraq. The characteristics of these popular protests indicate that they might evolve into a secular movement.

The first of these characteristics is that these protests have focused on general popular demands about services and security, completely unrelated to sectarian rhetoric or religious claims. This is something rare in Iraq's modern protests. The second characteristic is that the leaders of these protests are youth figures without affiliations to religious parties, or figures who have defected from these parties because of the failures of these groups. The third characteristic is that secular rhetoric was emphasized in the slogans and statements espoused during these protests, such as demands that religion not be involved in the administration of state affairs. For example, one such slogan was “Baghdad will not be Kandahar.”

In the absence of an experienced leadership for this emerging movement, the lack of financial support and a strategic development plan, it seems that converting this popular current into efficient partisan bases will require time to allow its adherents to gradually mature and grow. That is, if the negative domestic and regional developments do not put an end to the entire political process.