Iraq’s Grand Faw Port, planned to be one of the largest maritime ports in the gulf region, has been stalled due to political disputes. 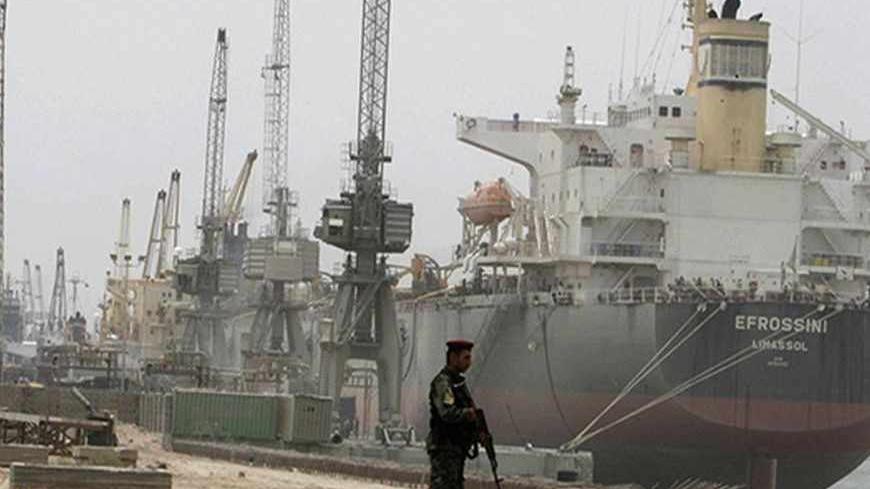 An Iraqi soldier stands guard at Umm Qasr's port near Basra on July 10, 2009. Plans to build another port on the al-Faw Peninsula have faced major setbacks. - REUTERS/Atef Hassan

Iraq has decided to exempt foreign companies involved in the Faw Port project from customs duties and taxes. This decision was an attempt to accelerate the completion of the stalled project, through which Iraq has sought to confront Kuwait’s maritime expansion by building a similar port nearby.

A government statement issued on Aug. 27 said, “In accordance with the laws in force, foreign companies shall be exempt from taxes and duties for the purpose of executing the Faw Port project, given that it is a developmental project.”

In April 2012, Iraq laid the foundation stone for the Faw Port project in the al-Faw peninsula in southern Basra. The project has an estimated cost of 4.6 billion euros ($6.1 billion), and the port's annual handling capacity is predicted to be around 99 million tons. This would make it one of the largest ports in the Arabian Gulf region. Yet construction on the project has stalled and little progress has been made.

The Greek construction company Archirodon was awarded the contract to build the port’s eastern breakwater. Yet the companies that will win contracts to construct the port’s main structure and western breakwater have yet to be revealed. There have been reports that four companies submitted distinguished proposals last month, and one of them will be selected within days.

Speaking to Al-Monitor, Ihsan al-Awadi, a member of the parliamentary Service Committee, said, “The completion of the Faw Port has been stalled due to political conflicts and security conditions.” He explained, “Lately, work on the project has changed.”

Awadi said, "The required designs were completed by companies contracted by Iraq in 2009 to build the port, and they were handed over to the Iraqi administration. Construction on the initial parts of the project, which consist of the eastern breakwater, has started.” He added, “A canal must be built in the sea with a width of 12-13 meters and a depth of 200 meters,” noting that “As soon as the drilling rigs … arrive, work will immediately start in order to build the canal.”

Awadi said that financing for the Faw Port project "will be carried out either through deferred payment — in accordance with the infrastructure law, which has yet to be voted on by parliament due to political disputes — or through direct investment by the private sector.”

Nassif added, “Some time ago, Transportation Minister Hadi al-Amiri came to parliament and said that the foundation stone for the port had been laid, and that he was waiting for the money allocated by the government to the port. Amiri noted that the government had already allocated the necessary funds, but that a large amount of the  money was returned to the state  state treasury after the funds were not spent.”

Nassif confirmed, “The port’s construction is taking place with great reluctance,” and added, “We fear that this project will be [further] postponed, after we were told that great stages of work were completed on the port.”

Nassif, who frequently criticizes what she considers to be “Kuwait's expansionist ambitions,” said, “The Faw Port is of great importance.” She added, “Kuwait’s Mubarak Port was completed, whereas the Faw Port is still under completion and the progress [on construction] is not at the required level. Although the transportation minister agreed with neighboring countries to build a dry Iraqi canal and activate plans for the railway, the construction phases of the Faw Port experienced long delays.”

Yet Anmar al-Safi, the spokesman for the General Company for Ports of Iraq, told Al-Monitor, “Archirodon completed construction of the eastern breakwater at the port and is working on completing the staging pier.”

He added, "We have set a lot of conditions on the companies bidding to build the breakwater, including the condition of having constructed a breakwater within the past 10 years, as well as some financial commitments.”

Safi said, “The Grand Faw Port is one of the most important projects being supervised by the Transportation Ministry.” He noted, “The project has faced many obstacles due to the construction of Kuwait’s Mubarak Port and because the project is linked to the interests of influential figures and countries which have prevented progress on construction.”