While the Kurdistan Region of Iraq has long been touted as a stable refuge in an otherwise turbulent region, there have been increasing complaints from the region’s non-Kurdish minorities of discrimination and harassment. 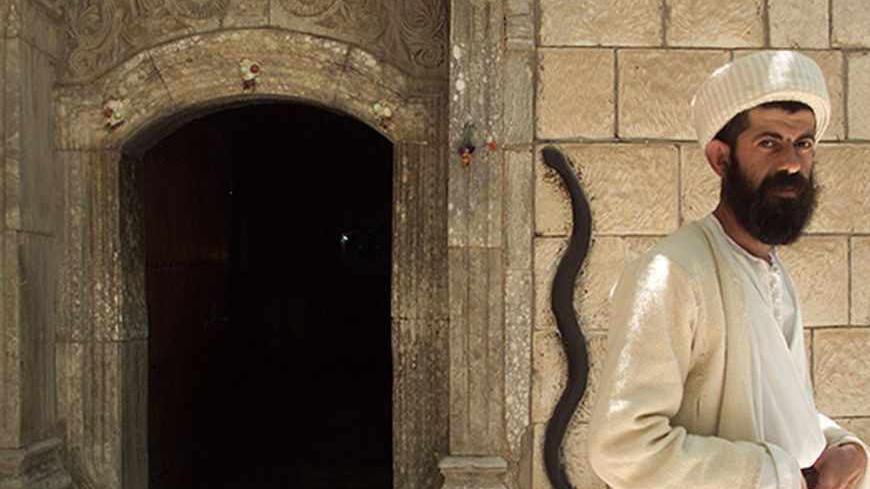 Yazidi monk Baba Chawish poses in front of an entrance to the Lalish Temple, some 50 km (31 miles) north from the Iraqi city of Mosul, May 11, 2003. - REUTERS/Shamil Zhumatov

The Kurdistan Region of Iraq succeeded in establishing a relatively stable state system in an environment that was — and still is — surrounded by dangers for the Kurds. This occurred after a decadeslong struggle against repressive totalitarian regimes that wanted to eliminate their unique culture and incorporate them into a chauvinistic, ideological identity. Kurds were joined in their struggle by other communities that have coexisted with them in the northern regions of Iraq for hundreds of years. These communities, however, are increasingly worried that the Kurdistan Region of Iraq has begun to take the same path as past regimes, characterized by totalitarianism and chauvinism.

The primary problem with regard to this subject takes the form of the stereotype characterizing the major Iraqi groups: that they are the owners of the land they inhabit and that other communities are "settlers" who should conform to the identity of the majority. This is what has happened with successive Iraqi governments since the establishment of modern Iraq in 2003, in different forms and with varying degrees of severity and weakness. Iraq has been depicted as being composed of ethnic Arabs who belong to the Sunni sect of Islam. This has led to the persecution of other components in the country, who represent the largest cultural and religious diversity in the entire region.

When Kurds wanted to rid themselves of this problem, they resorted to the idea of a federal region, to allow themselves to express their national identity and obtain their right to self-determination. Yet, while the establishment of a federal region represented salvation for the Kurds, at the same time it presented other Iraqi communities in Iraqi Kurdistan with the same problem the Kurds suffered from. The reason being that the Kurdish federal region was built on the basis of a national identity, produced from the stereotypical image that Kurds were the true owners of the land.

In addition, this image is open to criticism, as the model of a nationalist state cannot succeed in regions that are culturally diverse and composed of various nationalist groups. There are nearly 10 different sects living alongside the Kurds in their semi-autonomous region, including the Yazidis, Shabak, Assyrians, Turkmen, Kakaiya, Armenians and Arabs.

Iraqi Kurdistan has tried to satisfy the non-Kurdish groups by issuing a "list of rights of nationalist groups, religions and religious communities of the Kurdistan Region of Iraq." While this document acknowledged some of the natural rights of minority groups, it maintained that Kurds are the majority. However, there have been deepening feelings of marginalization and discrimination among these groups. In addition to the problematic name for the region — Kurdistan — which does not represent the general identity of all groups, there has been criticism directed at the region's administration by non-Kurdish communities.

Assyrians complain that they are not recognized, their demands are ignored and there are threats against them in the region. They are not licensed to participate in political work that is critical of or opposes the region's general Kurdish policy. Moreover, there is no recognition of Assyrian heritage or their contributions to civilization in school curricula, museums or other public spaces. In addition, there is unofficial discrimination against them when it comes to obtaining sensitive jobs such as in the police force, the army, the judiciary, higher education and so on. This forces them to resort to low-level jobs such as selling alcohol or prostitution. Residents of Assyrian areas in the Kurdistan Region of Iraq also complain that construction and development plans are aimed at affecting a demographic change that divides Assyrian blocs. This is to prevent any future possibility of the Assyrians establishing an autonomous rule. The latter is one of their key demands, but it is categorically rejected by the regional government. Also, there are reports of intimidation in which Assyrians are said to have been forced to vote for Kurdish-supported candidates in the elections on Sept. 21.

While Assyrians represent the most prominent case of a clash with the Kurdification policies being applied in the region, there are also many complaints from other minorities against these policies that target them. The Yazidis are facing a policy of cultural and security control against them, instituted by the official Kurdish institutions, according to documents published by Wikileaks that reveal the escalating dispute between the regional government and Yazidi leaders. In one document, it was revealed that the Yazidi spokesman warned the regional government that they would launch a civil war if these policies continue to be applied. Moreover, the Shabak have complained of wide-ranging Kurdification policies, which include forcing schools in Shabak regions to teach the Kurdish language and opening dozens of Asayish and Peshmerga headquarters in their areas, even those that are subject to administration by the central government in Baghdad. There have also been restrictions enacted against the Shabak's only political entity, with security agencies pursuing its members and media campaigns against them. Also, objections lodged by the Kurds were the main reason for the Shabak not being included as one of the official recognized sects in the 2005 Iraqi Constitution. The Turkmen also complained about restrictions by the Kurdistan Regional Government, especially in Kirkuk. The Turkmen consider themselves the majority in this city, which is disputed by the Arabs, Kurds and Turkmen. There are also other small groups of Turkmen in Kurdish areas that complain of a policy of exclusion and Kurdification applied against them.

Finally, although the situation for minorities in Iraqi Kurdistan is much better than that in other regions of Iraq — as well as in some other countries of the region — there is an urgent need for the Kurds to avoid a policy of building a nationalist state. They must distribute power between all the components of society, through delegating wider powers to them and allowing them to participate in the formulation of the political and cultural identity of their regions. This is what will ensure their long-term stability and continuity.