Amid violence and rampant corruption, many Iraqi youth are frustrated with the slow pace of democratic change in the country. 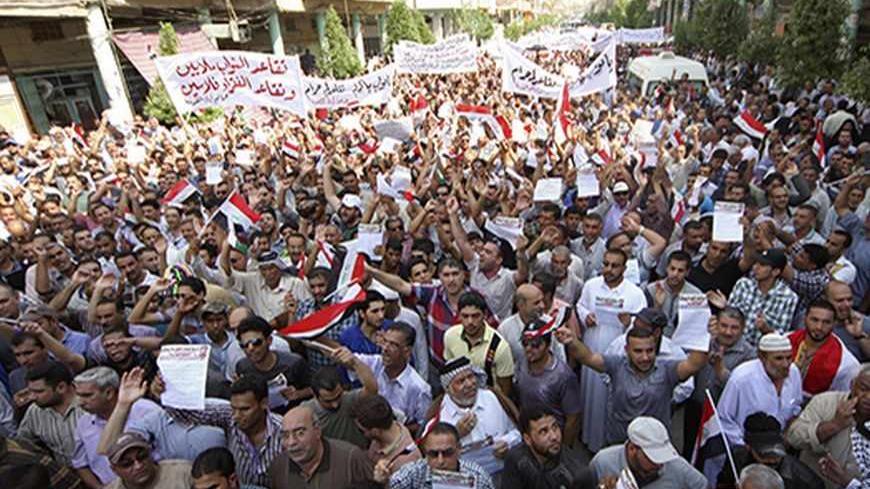 Protesters demand that the pensions of parliamentarians be canceled during a demonstration in Karbala, Aug. 31, 2013. - REUTERS/Mushtaq Muhammed

Many Iraqi activists have been coordinating events to provide further impetus for a new campaign, spearheaded by the youth movement, that is calling for the cancellation of pensions for lawmakers and members of parliament. Organizers have called for demonstrations throughout Iraq on Oct. 5, 2013. Riad al-Husseini, one such activist, has begun posting new banners and ads calling for support for these protests.

It seemed as if many Iraqis like Husseini have become so addicted to demonstrations and protests as the only available democratic means to achieve their goals that if their attempts were unsuccessful, they would consider democracy a failed project altogether.

Husseini described the demonstrations on Aug. 31 during which protesters called for the cancellation of politicians’ and MPs’ pensions. However, their demands were not met, just as in all previous protests, and security forces cracked down on demonstrators and blocked the roads.

Speaking to Al-Monitor, he said, “I was overcome with despair. I felt that those protesters were heading toward a dead end and wouldn’t achieve their goals. The government’s procrastination harms protests more than blocked roads or security officers, who have closed off all entrances in every demonstration.”

However, Husseini discarded his despair and decided to take to the streets once again.

Unlike Husseini, who continues to entertain a small hope that democracy will be established in Iraq, Iraqi writer Rasmiyah Mahbas is pessimistic about the demonstrations that failed to have a major impact and were short-lived.

Speaking to Al-Monitor, Mahbas said, “We will not wait for the fruits of this democracy that failed to achieve stability and security over the past decade.”

Mahbas is not concerned about the means of repression, including the closure of major roads and bridges by security forces so as to prevent protesters from reaching their gathering points. Rather, she is worried about the public’s “lack of awareness,” as people continue to “join demonstrations impulsively without specific goals or a deep faith.

“The goal shouldn’t be to go to demonstrations only for the sake of demonstrating,” she added.

She clarified, saying, “I met this guy who was standing next to me during one of the demonstrations. He was shouting slogans fervently. Then he turned toward me and said: ‘The details don’t matter, I am just demonstrating against the government’.”

“What concerns me is that from time to time young people rise up, either via Facebook or other social networking sites, calling for demonstrations and rallying followers. However, they only act on the spur of the moment. Their actions are merely a short-lived show of strength and soon everything fades away,” she added.

Mahbas continued, “It is true that demonstrations are an act of democracy. However, their recurrence in the same failed approach, and the trite manner in which they deal with goals and objectives have transformed the demonstrations into a burden on the actual effective activists.”

In the same vein, Riyad al-Gharib, an Iraqi writer and media personality from Babil radio, told Al-Monitor, “The Iraqi dream of democracy is likely to fade away. Political elites have long undermined the meaning of the democratic process and therefore citizens — who look up to these elites — have begun to view democracy as a problem.”

“Political elites ought to reconsider their policies, because the citizens who helped them arrive to power are capable of ousting them in a peaceful democratic process,” he added.

For his part, artist Sami Nassim of the Institute of Musical Studies told Al-Monitor that “Iraq’s fledgling democracy, which was established through force and gave birth to an incomplete democratic system, continues to crawl around in the country.”

“This democracy is not meant to progress. In order to be [deeply entrenched], democracy has a long way to go and its needs major leaders — not only politicians, but also artists, intellectuals, and university professors to promote it and hold it up, for democracy is an urgent desire for freedom before anything else,” he added.

Researcher and writer Mohsen Kazem told Al-Monitor, “Democracy means building a people first, before institutions and infrastructures. After the demise of dictatorship in Iraq, a pluralistic democratic system was established. However, terrorism and corruption distorted the democratic process as a whole.”

Perhaps these two factors — terrorism and corruption — are the answer to the question posed by Iraqi journalist and writer Falah al-Meshaal, with whom Al-Monitor met. “How did democracy in Iraq become a synonym for unprecedented levels of violence since 2008?” he asked.

While “authoritarian” politicians have been clamping down on protesters, the people continue to be unaware of their objectives and fail to master the “civilized” technique of peaceful protests. Thus, many MPs who support reform of the pension program said, “The democratic system is at risk. Protesting is a constitutional right for all and does not require permission from anyone.”

Meanwhile some of the MPs rushed to blame demonstrators for not abiding by laws. In fact, an Iraqi MP described the people demanding the cancellation of MPs’ pensions as “miserable” and “lost.” This is a clear contradiction between the representatives of the people and the demonstrators and citizens.

Demonstrations of thousands of Iraqis who took to the street to rail against the government’s corruption and poor services coincided with the protests that began sweeping the entire Arab world in 2011, and many MPs believe that Prime Minister Nouri al-Maliki’s vow then not to run for a third term in 2014 was an attempt to ease the protests. (It appears now that he may run neverthless.)

While some saw Maliki’s decision as a test of democracy, protesters were concerned about democracy and politicians feared the protests.

For his part, writer and journalist Salam Khamat told Al-Monitor, “The success of demonstrations in achieving their goals is closely linked to their power in changing the current Iraqi scene.”

Moreover, although the Iraqi Constitution provides for the right of the people to demonstrate, there is another law that determines the authority that shall grant permits for protesters.

Amid this uncertainty, many officials in the Interior Ministry confirm that they are the only authority entitled to grant permits for holding demonstrations.

Some people have another opinion in this context. They say there is another factor affecting the democratic project, which needs to be promoted and supported. They believe that the United States does not have the right to renege on its decision to support strengthening programs for the development of democracy and the institutions in Iraq, which it invaded in 2003.