Disaffected Iraqi youth are increasingly doubtful of the country’s potential for democracy. 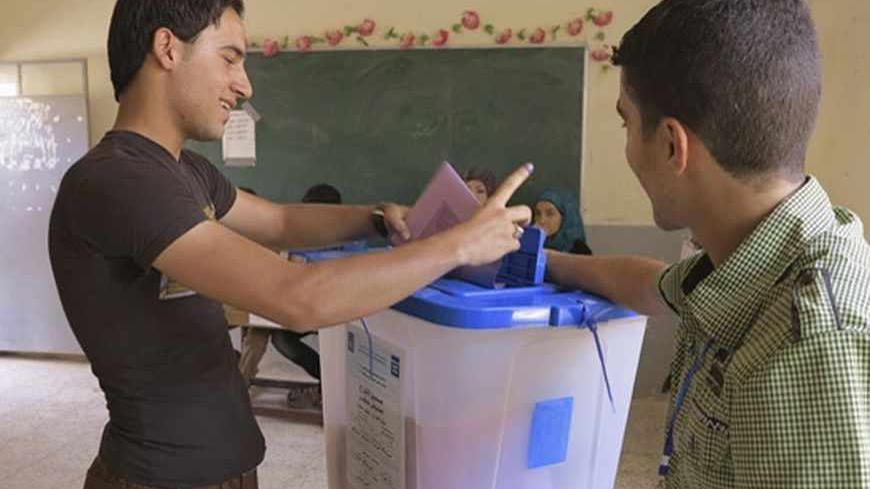 A youth casts his vote into a ballot box during Iraq's provincial elections at a polling station in Ramadi, 100 kilometers (62 miles) west of Baghdad, June 20, 2013. - REUTERS/Ali al-Mashhadani

It is no longer a secret that the Iraqis, the youth in particular — the most effective and educated class — are growing desperate due to the futile democratic process in their country.

This angst highlights questions that are constantly on the minds of Iraqis: “Are we waiting for an Iraqi 'Sisi' to turn the tables?” What’s more, the rhetoric that extols the “advantages” of dictatorship has become a loudly-voiced, widespread debate, which indicates that the glimmer of hope the people once had is fading away.

Ahmad al-Bayati, a student at the University of Babylon (south of Baghdad), told Al-Monitor, “Many extremist youth are talking about an Islamist republic led by a religious seminary, while others prefer a totalitarian system over the chaos of democracy.”

Other than them, there is a minority of “leftists” who analyze the situation as a “normal result of the intermarriage between religious and Western powers, which have brought about change by using weapons. Therefore, a fragile entity that cannot survive for long was born.”

As the 2014 parliamentary elections approach, the awaited decisive results are taking their toll on the psychological state of the Iraqi voters who are still seeking a [competent] state, something they have heard about but never seen. Qassem Hussein Saleh, a psychological expert and head of the Iraqi Psychological Association, describes what is coming to pass in Iraq as “absurd.” In a statement to Al-Monitor, Saleh notes that the reason behind this “absurdity” is that “the ruling elite of various sects, affiliations and designations do not believe in the concept of the state. The reality on the ground gestures more toward 'statelets' represented by governmental institutions. Therefore, one notes great discrepancies between ministries.”

Ahmad al-Husseini, a political science academic, told Al-Monitor, “Elections are supposed to bring leaders and representatives who seek to serve the people and reinforce their security. This, however, did not happen and it will lead to a reduced turnout at the polls in the next elections, since people are convinced of the futility of this process.”

This is what happened in the provincial elections that were held in April. Many Iraqis, however, as they spend a hot summer day without electricity and subpar public services, do not seem to surrender to this despair pervading their minds. They, instead, humor hope through solutions that are a far cry from being “realistic,” embodied in phrases such as “Iraq is on the verge of a political and military coup.”

Issam Hassan, however, believed as he relayed his impressions to Al-Monitor that “those [who say this] are certainly going to hell.”

Yet, Kareem al-Fatlawi, a religious man who bases his prophecies on religious convictions, told Al-Monitor that he expects “the imminent collapse of the political process. The alternative will be a religious authority that leads the people to the right path with the support of metaphysical powers: God and imams.”

Contrary to that statement, Amjad Hassan, a teacher in Karbala, spoke to Al-Monitor about “the dereliction of the [religious] authorities,” since they should have “taken charge of the situation since 2003, without letting politicians play games with the country and people through a failed political administration and an agenda of corruption that has paralyzed the state.”

He then added, “This authority has given blessings to politicians at some point.”

In a country that has grown accustomed to dictatorship over more than three decades and has practiced an inchoate democracy amid turbulent security and political situations, the dream of democracy does not seem alluring to many. This is a country whose political and social crises continue to proliferate.

The pessimism of the youth seemed a natural result of the failure in keeping promises on development and services, which lasted for over a decade.

Yet, negativity sweeps the minds of the youth, and despair leads them to believe that “the course of the wrong path cannot be altered.”

Writer Wafaa al-Rabii told Al-Monitor that this is due to “corruption pervading the state like a cancer for which there is no cure.”

That is why, as Rabii puts it, “The youth resort to ideas that are a far cry from democracy; some believe that a system based on Islamic Sharia is better for the future of the country, while others prefer military rule.”

It is not surprising within the labyrinth of democracy for Ismail Jaaz, an Iraqi academic who studied law and who has an Islamic background, to say that the “United States has given us the gift of democracy, while we have offered it our country in return.”

Speaking to Al-Monitor, Jaaz added, “There is no solution other than establishing an Islamic caliphate,” noting, “The country has collapsed in light of dictatorship, while democracy has delivered the coup de grace to what was left of it.”

Observers of the Iraqi situation since 2008 see that the inclination of Prime Minister Nouri al-Maliki to monopolize rule within the hands of a small circle of Shiites who opposed the former dictatorship. This inclination dominates the process of naming military leaders and battalion members. It also prevails over the federal courts and the central bank.

The executive body takes charge of all the control procedures that were set to impede any new autocracy from emerging. Jaaz, in a spontaneity that has nothing to do with philosophization, says: “Provide me with security, electricity, water and services, and then talk to me about politics and rules. The most pressing thing for me is that I’m practicing my democracy in a country that is not governed by law.”

In a democratic Iraq, the voice of the left is still faint, regardless of talk that its presence is intensifying. This voice uncovers the will to bring about change peacefully through taking a stand against the Islamization of life. In a statement to Al-Monitor, Iraqi journalist Ahmad al-Muzaffar condemned those who criticize Western democratic values, even though they would never have risen to power if it were not for the Western intervention that toppled former President Saddam Hussein.