Iran ranked low on the World Happiness Report, but that may be changing under President Hassan Rouhani. 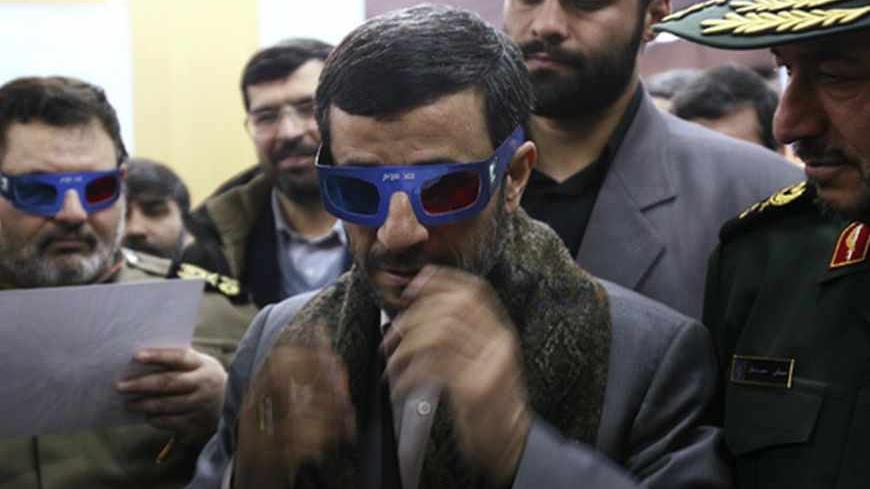 Iranian President Mahmoud Ahmadinejad wears 3-D glasses to watch a program about an Iranian rocket during a visit to the control center for Iran's space program near Tehran, Feb. 4, 2008. - REUTERS/Fars News

A correspondent in Tehran
September 27, 2013

TEHRAN, Iran — According to the recent "World Happiness Report," Iran is far from being a happy nation. Being ranked 115th among the 150 nations which were surveyed is a huge disappointment for Iranian society. This is the country in which Khayyam, one of the greatest classical Persian poets, about 1,000 years ago wrote: “Drinking wine and being happy is my rite.”

For this research, in addition to surveying the citizens of these countries in regard to their psychological health, other factors such as people’s hope for a healthy life, level of corruption, gross domestic product (GDP), freedom of choice, level of social support and level of generosity have also been calculated and taken into consideration.

Ali Akbar Mahdi, professor of sociology at Ohio Wesleyan University, who has done extensive research on societies in the Middle East, believes that the policies of the government after the Islamic Revolution in 1979 are the reason behind Iran’s low rank in this international diagram. He told Al-Monitor, “Given the revolutionary atmosphere of Iran in the past three decades, and heavy restrictions of all types placed on citizens’ private and public life, it is not surprising to see such a low level of happiness among Iranian citizens.”

Mahdi continued, “There is a direct correlation between happiness and self-expression. In a society where widespread inhibitions are placed on individual behavior and spontaneity and unregulated expressions of joy are considered immoral, it would be hard to find anyone to either feel in control of his or her life or excited about his or her state of being.”

Almost all the countries in the region including Israel, United Arab Emirates, Oman, Qatar, Kuwait, Saudi Arabia, Turkey, Lebanon and Tunisia are ranked higher than Iran. Even countries such as Pakistan, Iraq and Palestine, which are generally thought to be in worse shape compared to Iran, due to military unrest, are in a better position as far as happiness is concerned.

“Look how they have screwed us up, that we feel even more miserable than the Pakistanis and the Palestinians,” said Ali, a 26-year-old university student, who uses his personal car to work as a taxi driver. “I think this ranking is accurate. I myself have no fun in life anymore. Where can we go? Everywhere they are bothering us; there is always the morality police, stress, no girlfriend, and marriage I will only see in my dreams.”

In one of the neighborhoods north of Tehran, I discussed these statistics with one of the most famous psychologists in the capital. Talking on the condition of anonymity, the psychologists told Al-Monitor, “As a therapist, I have witnessed a substantial increase in the number of my patients over the past four years. What is somewhat difficult to explain is that these psychological problems have become very complicated. The comparison between the years 2005-07 and 2010-12, presented in the recent report, can explain why there has been an increase in the number of patients. With a negative indicator of 0.677, Iran is the ninth country with a decline in level of happiness in recent years.”

The psychologist continued, “The president of a nation is the most important representative of that nation and he can be a role model for society. Ahmadinejad’s character, the unusual actions of his government officials and people close to him in the past eight years, the ridiculous spreading of lies and corruption, has made society very depressed. His re-election in 2009 — an election which many believed was rigged — and being faced with the reality of having to live in the same environment for another four years, was intolerable for many.”

In fact, many Iranian citizens believe that Ahmadinejad created an atmosphere in Iran like those in the writings of Franz Kafka, an exhausting and unfathomable circus. The Kafkaesque atmosphere has resulted in more depression. The recent report explains in its AI table that Iran’s GDP per capita report are from 2009, and the level of corruption is calculated based on data from 2008. This shows that if the data had been gathered after the crippling international sanctions were imposed on Iran, the country could have ended up in a rank much lower than 115.

In 2012, income from petroleum exports, which is the main source of revenue for the government, declined to almost one-third of what it was in 2008. The rate of inflation was 10.8% in 2009, while in 2012, according to the statistics released by the government, it rose more than 30%. At the same time, the riyal declined in value while the income of many families stayed the same, thus, the purchasing power of many Iranians also declined noticeably. In the spring of 2012, the website Tabnak which belongs to Mohsen Rezai, the secretary of the Expediency Discernment Council and 2013 presidential candidate, reported — based on the information released by the Central Bank — that one-fifth of Iranian families have someone in their family who is unemployed.

These dire economic conditions have led to hopelessness, which leads to depression, the psychologist told Al-Monitor. “Losing sight of your goals in life is the beginning of depression. Iranian citizens, regardless of upbringing, background, education and income, have shared one thing with each other in the past four and perhaps eight years: They have all lost the sight of their common life goals, and happiness and hope for the future are directly connected.”

Though it may take time, some are beginning to express some guarded optimistism. A political activist and a supporter of the 2009 Green Movement, who has also been previously imprisoned, said to Al-Monitor, “After the rigged election of 2009, society was angry and people came to the streets to protest; many were killed, many were injured, many were imprisoned and many were kidnapped. Two years later, the leaders of the movement were arrested. From the fall of 2011 to the summer of 2012, Israel was constantly threatening to attack Iran, and therefore people were frightened. Well, given all this, we should have an even lower rank. But melancholy people remained hopeful and voted for Hassan Rouhani. Now he should use his 'key' to open the gates of happiness.”

The political activist expressed his hope by reminding me of Mir-Hossein Mousavi, the leader of the Green Movement who has been under house arrest, along with his wife, Zahra Rahnavard, for 1,000 days, and his 18th statement, which he ended with a poem composed by the contemporary Iranian poet Mohammad Reza Shafiei Kadkani. The poem reads:

“A child called Happiness has recently gone missing, bright sparkling eyes with flowing tresses and high hopes. If anyone catches sight of her, inform us. This is our address, between the Persian Gulf and the Caspian.”