Why General Sisi Should Not Run For President of Egypt 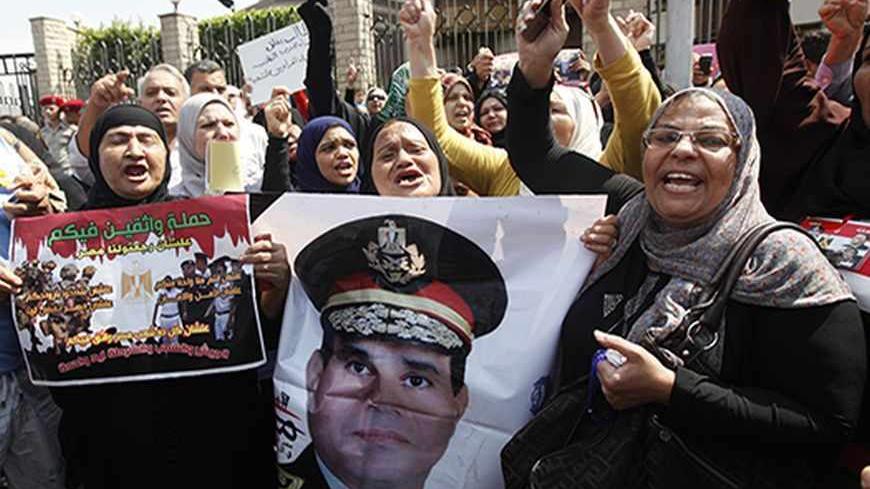 Reports have surfaced with news of a popular Egyptian movement called "Complete Your Favor," aimed at mobilizing public pressure on Gen. Abdel Fattah al-Sisi to run for the presidency. As usual, skeptics smirked at such a plan. They had always suspected that Sisi would pretend that he was not interested in becoming president, while intelligence and security services prepare for popular and media pressure to "force" him to run in the end. What may appear as a spontaneous act, they see as a conspiracy long in the making.

Those who are enthusiastic about the defense minister running for president argue that Egypt is in need of a strong charismatic leader, someone capable of inspiring the people and reviving national ambitions. Such a leader, they believe, is needed to lead state institutions in coordinating their efforts to pick the country up from its fall and firmly restore the state's respect. Key reforms will undoubtedly require introduction of unpopular policies which can only be accepted if the people truly believed in the country’s leader. Enthusiasts point to the popular support Sisi enjoys and how Egyptians for instance accepted a harsh curfew which kept them at home starting from 7 p.m. and voluntarily observed its restrictions despite the negative economic consequences in a country where shopping traditionally takes place after sunset. Contrary to this, Egyptians had strongly rejected the Brotherhood’s government’s proposals to introduce legislation that would force shops to close at 9 p.m.

Furthermore, supporters believe that Sisi's ascension to power as a president is necessary and even natural, since the country has only known military rule since the 1952 coup d’état. It was only recently that religious currents have challenged this monopoly, with a president elected from the Brotherhood. Also, according to them, a military leader like Sisi is badly needed to confront the Brotherhood's attempts to return to the forefront of the political scene, given all the risks this holds of things regressing.

In contrast, the majority of the Jan. 25 [2011] revolutionaries view this as a potential return to military rule and a dangerous setback for the revolution, for which thousands of martyrs sacrificed their lives. If Sisi becomes Egypt’s next president, for them this will indicate a comeback of the very regime they rebelled against. The sharp differences between supporters and critics of Sisi’s candidacy reveal the conflict between the Jan. 25 revolutionaries and the new comers of the June 30 protests against Morsi.

Sisi himself had announced on many occasions that he was not interested in ruling Egypt in the position of president, and that "protecting the people's will is more dear and more valuable than ruling Egypt." But these announcements only fueled the enthusiasm of his supporters and their insistence that he is the right candidate. Sisi undoubtedly emerged as a strong popular leader in a unique historical moment, saving the country and its people from the horrors of the Brotherhood's religious rule, which nearly hijacked the country with no hope of return. At the time of his intervention, Egypt had witnessed violent street confrontations between the Brotherhoods’ opponents and their supporters which was quickly developing to something which resembled the first signs of a civil war similar to the ones taking place in neighboring countries like Syria.

What Egypt really needs now is to promptly march along the roadmap. The new constitution must be drafted, debated and ratified, and then presidential and parliamentary elections must be held in an inclusive democratic process which leaves out no factions. Success in that endeavor can help improve stability and security, which are desperately needed for reviving the economy — including tourism, investment, service sector and industrial activities.  Then comes repairing the dilapidated state structures, hopefully putting Egypt on the threshold of a major breakthrough that would turn the country into a modern and advanced state. This requires the presence of a strong and neutral institution which is not a party to the political competition, and can act as an impartial guarantor and observer of the democratic transformation process. In the opinion of the majority of Egyptians, this institution is the armed forces. It would play this role through a subsequent transitional period, which may drag on for five or 10 years. Thus, Sisi running for president would prejudice this neutrality where the presidency and the armed forces would become two entities with one giant ruling will, with no one to oversee this enormous power concentration or scrutinize its policies.

The Egyptian army has proven that governing the country is not on its agenda. At moments of severe state weakness, the army could have seized power without resistance, and be welcomed by the people. For example, one of these moments of weakness occurred during the bread riots on Jan. 18-19, 1977, then during the Central Security Forces’ rebellion in Feb. 1986 and finally following the Jan. 25 revolution. In these three instances, the armed forces insisted that its role was limited to resorting internal security. Once this was achieved, they returned to their barracks, leaving rule to the country's legitimate president.

In  a series of interviews which I had with Field Marshal Mohamed Abdel Ghani el-Gamasy, one of the greatest commanders of the October War and the minister of war during the bread riots in 1977, he remembered that before accepting the post of minister, he stipulated that President Anwar Sadat would not use the army to repress Egyptians. According to Gamasy, the army had regained its respect in the hearts of Egyptians following the October 1973 War, wiping out the shame of the Six Days’ War. After the 1967 defeat, Gamasy said, the army had firmly adopted a doctrine that it was necessary to distance itself from politics and be solely devoted to developing its combat capabilities as a professional army. This was to avoid what happened before 1967, when corruption resulted from the army meddling in most of the state's civilian affairs leading to the worst defeat in Egypt's modern history.

In my opinion, there is no military commander, regardless of his popularity, who can change this doctrine within the Egyptian army. The army operates as an institution with traditions, which no single member can compromise. If a commander becomes too full of himself that he decides to put his political ambitions before the army’s traditions, high- and mid-level commanders can remove him with minimal effort. Military sources revealed that Sisi ordered a wide poll to be held amongst officers and soldiers before deciding to go on challenging Morsi. Results revealed widespread approval in support of standing with the people on June 30 against the president. Such a poll was necessary because of the possible bloody confrontations where a soldier may have to carry arms against some of their own fellow countrymen as a result of such a step. The army’s move would only be successful if soldiers were convinced heart and soul of the necessity of such confrontations to protect the country from a much greater danger and strife that would threaten the people and the nation.

Some of those close to Sisi have come out and said that he asked that the popular campaigns calling for him to run for president be stopped, since his decision against running was final and irreversible. He wanted to prove to Egyptians and the entire world that the move carried out by the army was not how the West and some opposition members in Egypt perceived it: a desire to grab power. Rather, it came from a deep patriotic concern aiming to protect Egypt's identity and national security, and to safeguard its highest interests. It was to prevent the collapse of the state and stop the country from sliding into chaos possibly leading to civil war. Abdullah Sinawi quoted Sisi as saying that he would not run for the presidency even if millions took to the streets, blocking them for a week to pressure him. The army’s official spokesman also came out confirming that Sisi will not run for president.

Egyptians are currently experiencing a huge crisis of trust, a loss of faith in state institutions. This is a result of the corruption of the former regime. Revered national icons have one by one fallen from the grace. Skepticism has prevailed as not one person could serve as a role model for the youth. This has shaken the value system itself. A general belief is permeating  the national conscience in which everyone is corrupt, everyone is a hypocrite and those who preach patriotic slogans would be the first to disregard them in practice. Now, Sisi may be in a position to challenge this, set the record straight and restore this broken faith, cultivating confidence in state institutions.

Sisi's decision not to run in the elections is, in my opinion, the right decision and he should stick to it. This is because it can help restore confidence in state institutions and break this vicious cycle of skepticism, which itself leads to corruption, or at least to paralysis and inability to make decisions. A phenomenon known as "wobbly hands," where state officials are unable to make any decision, even if it is necessary to safeguard the country's interests, for fear that the official will later be accused of making the decision for personal motives or gains.

Today, Egypt may not need Sisi as a president as much as youth need to regain confidence that there are national figures who put the interests of the country above their own. Egypt does not need the military to rule, but rather — during the coming transitional stage — it needs the army to serve as a strong guarantor, which can support legitimacy and the democratic transformation capitalizing on its popularity and credibility in mobilizing popular support for elected governments and necessary, though sometimes unpopular, reform measures.

This puts Sisi and the army in an extraordinary situation for some time to come. And perhaps as a result of these exceptional circumstances, the next president will not be able to exercise full control over the army’s internal affairs or freely dismiss its commanders without first consulting the leaders of the army themselves. If this must happen, it should come as temporary situation that will eventually be phased out with time. We can look at transition models in other countries that have gone through the same experience to benefit from them at this stage. This may even require the constitution to clearly stipulate a special role for the army for a limited period, where the army protects legitimacy and the civil state, while the parliament and the Supreme Constitutional Court, for example, regulate potential interventions during the coming transitional period.

The message I wish to deliver to Sisi is: "Complete your favor, and don't yield to pressures demanding that you run for president. For Egypt needs restoring faith and confidence, more than it needs any president."