With the opening of the school year, educators decry the inequality of the Israeli educational system, which has become expensive and selective. 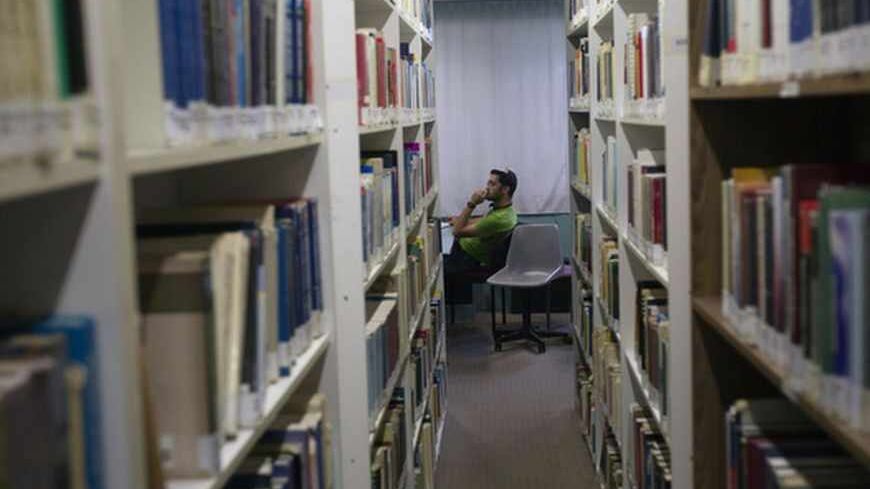 A student sits in a library at the Ariel University Center in the West Bank Jewish settlement of Ariel Sept. 13, 2012. - REUTERS/Ronen Zvulun

The new school year faces two major challenges. The first is Israel’s efforts over the years to introduce universal subject matter into the ultra-Orthodox educational system, but to no avail. The second is Israel’s insistent declarations that it is striving to bridge the deepening gap between students in the center of the country and students on the periphery.

According to data published by the Ministry of Education on Sept. 2, schools in more affluent towns and villages were found to produce more students eligible to receive a matriculation certificate than schools on the periphery. Based on this division, Arab settlements are ranked at the bottom of the list of educational achievements, except in the rarest of incidents.

The figures published by the Ministry of Education this week reflect the bleak results of this privatization process. According to the data, less than 50% of students in development towns in the north and south of the country are eligible to matriculate, while Arab settlements, as it has already been noted, lag far behind. At the bottom of the list were the Arab towns of Kafr Qassem and Jisr az-Zarqa, where only two out of 10 students were eligible to receive a matriculation certificate this year. In more affluent towns throughout the country, the results are completely different, with eight or nine out of every 10 students eligible to matriculate.

Kfar Shmaryahu is considered one of the wealthiest towns in Israel. It’s not that parents here don't pay thousands of shekels a year to fund all the “extras” that their children are lucky enough to receive. “The more you invest in the student,” says Aloni, “the better the results.”

Aloni had no qualms about collecting a kind of “education tax” from his students’ parents so that he could meet his target. He had reached the conclusion that if he didn’t collect those payments from the parents, it was doubtful whether he would have any success in improving the eligibility rate.

“I’m sorry to say that the Israeli educational system is not egalitarian,” he said. “Those who pay more, get more. With me it works like this: Whenever I come across a weaker student, I focus on his weaknesses and invest as much as necessary until he overcomes his problems. If he’s weak in English, I attach an English tutor to him to sit with him while he does his homework until he has mastered all of the material. I do that for every subject. Wherever you invest money, you get paid back in full. So, instead of just 50% of my students being eligible for a matriculation certificate, I have upped it to 90%.”

The state of education in the towns and villages of the periphery is a dismal negative image of that. Schools have problems collecting additional funding, because so many of the parents do not earn more than the minimum wage. And there are quite a few towns where half the residents live beneath the poverty line and depend on Social Security payments to live with a modicum of dignity.

The town of Migdal HaEmek in the north of Israel appeared right in the middle of that list of towns and villages published by the Ministry of Education. Only about 50% of its students succeeded in obtaining a matriculation certificate. This means that half of the town’s high school graduates will be unable to attend college or university. They will have to make their way in life without academic education.

Over the past few years, many of Migdal HaEmek’s residents have left for new communities that were built in the town’s environs. “And who is left in Migdal HaEmek?” rages Avi Lazimi, principal of the town’s Machshava school. “The ones left are people who couldn’t move somewhere else. The result is that the stronger residents relocate, leaving the weaker residents behind. This is reflected in the sad fact that five out of 10 graduates are not eligible for a matriculation certificate. It’s a very serious situation.”

Lazimi is worried that the future does not bode well for his town, or for other development towns either for that matter. “Much to my chagrin, the gap between us and the more affluent localities is only getting wider,” he notes. “The last development town was built 40 years ago. And where has Israel been building and investing most of its resources? In three areas: in the settlements, in towns focused on the quality of life, and in hilltop villages in the Galilee. When you examine who goes to live in those places, you’ll get the same results that you found in the Ministry of Education’s last matriculation data.”

Lazimi personally witnessed the decline of education in his town and other localities in the periphery from up close. He saw with his own eyes how the culture of poverty in these towns directly impacts the students’ scholastic achievements. “The policy of building affluent suburbs in the vicinity of the development towns is what killed them,” Lazimi claims. He is hard-pressed to hide his anger: “The result is that the stronger families in Migdal HaEmek and other towns left, taking with them the students with the highest potential. We remained behind with the poverty, indigence, and an education system without any real achievements.”

Both Aloni and Lazimi agree that the privatization of education is responsible for this growing divergence. It is privatization that posts the best teachers to schools in the more affluent communities and the less capable teachers to the poorer communities. “Wealthier localities pay teachers three times as much as I can afford, if not more,” Lazimi complains. “Where will I get the money for that? Who will I collect the money from? From parents who can barely subsist on what they earn?”

It is true that the state passed the Free Education Law, ensuring every student an equal opportunity to obtain an education. But the trend to privatize education, which has gained momentum in the past decade, has resulted in steep competition between schools and even within the school walls, so the search for quality education continues, even if it is expensive. In this competitive atmosphere, the chances of wealthier students succeeding, both in school and outside of it, are significantly higher. And what about equal opportunity for the student born in the periphery?