The pro-Israel organization J Street, AIPAC's liberal rival, must confront its dual loyalty dilemma, which will be tested once Jerusalem's division is put on the Israeli-Palestinian negotiating table. 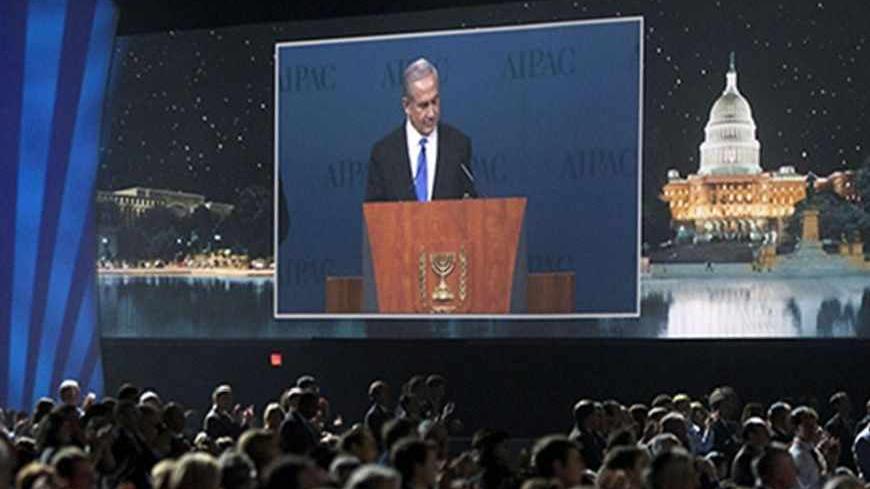 The decision by the American Israel Public Affairs Committee (AIPAC), the pro-Israel lobby in the United States, to back President Barack Obama’s decision to attack Syria brings to mind the story of a Jewish slave who put rotten fish on his king’s plate. The king, furious, orders the slave to pick one of three punishments: eating all the smelly fish, getting 50 lashes or being run out of town. Lashes will hurt, the poor man tells himself; being expelled from town is too harsh a sentence. I’m better off eating the bad fish, he decides. With his stomach straining from the fish, the slave stops eating and asks to exchange that punishment for a whipping instead. After taking a hefty number of lashes, the poor man begs again to change his mind and this time leave town. Thus, instead of making a wise choice at the start, the slave eats the putrid fish, gets whipped and is kicked out of town.

AIPAC came in for criticism from members of Congress, among them Republican lawmakers who are ardent supporters of the lobby but strenuously opposed to the president’s stand. It was branded, once again, in American (and Jewish) public opinion, as a war-mongering organization and a minority that puts the interests of a foreign country over those of the United States. It was then caught with its pants down when it became known that Prime Minister Benjamin Netanyahu supports the [US-Russian] agreement on Syria.

Abe Foxman, national director of the Anti-Defamation League, an organization that also backed Obama’s position, explained in an interview with Israeli Army Radio, “In the same way that Secretary [of State John] Kerry and senior Obama administration officials asked for our help in advancing the peace process, so they asked for support about a strike on Syria.” On that date [Sept. 9], it still appeared that Netanyahu, too, was in favor of such a strike.

Seems like a simple formula — administrations ask, Jewish organizations support. But what would have been the position of these organizations had Netanyahu preferred to have Syrian President Bashar al-Assad, “the devil you know,” remain in control of Syria rather than risk an al-Qaeda takeover (which was the official Israeli position for the first year of the war)? In that case, would they still have supported Obama’s stance on attacking Syria? A reminder: When the administration asked Foxman and his friends to support Obama in imposing a settlement freeze on Netanyahu’s government to advance the “peace process,” the diligent activists used all their power and money to foil such a move.

The attack on Syria created a different, although no-less-complex dilemma for J Street, AIPAC’s liberal Jewish rival. On the one hand, J Street — established to promote a solution to the Israeli-Palestinian conflict and opposed to the settlement enterprise — is considered a natural Jewish ally of Obama and the Democratic Party. On the other hand, many of its prominent activists and donors were opponents of the Vietnam War and oppose the use of force to resolve foreign conflicts. In response to a question regarding its stance on the Syrian issue, Jeremy Ben-Ami, the organization’s founder and president, directed Al-Monitor to J Street’s official statement from Aug. 29 demanding the Assad regime be deterred from using chemical weapons, but stressing that there are no easy or clear-cut solutions to the crisis.

In hindsight, the agreement with Russia to remove Syria’s chemical weapons, forestalling the military option, justified J Street’s decision to sit on the fence. The mild language, adopted after a stormy debate among the organization’s leadership, reflects J Street’s evolution from a quasi-fringe movement, dubbed the left-wing margins of the Jewish community, to part of the establishment.

Two years ago, four Knesset members from the Kadima Party were attacked for accepting an invitation to take part in the organization’s annual conference. The minister for public diplomacy at the time, Yuli Edelstein of the Likud, wrote to Kadima leader Tzipi Livni, stating that participation in an event held by an organization that “conducts openly anti-Israel activity” is “a crossing of red lines.” This year, not only is the Israeli justice minister and head of the HaTenua Party, the same Tzipi Livni, expected to address the 3,000 conference participants, alongside Meretz Party leader Zehava Gal-On and opposition leader Shelly Yachimovich, but among the main speakers are also Knesset members Tzachi Hanegbi of the Likud and Yitzhak Vaknin of the ultra-Orthodox Shas Party.

In an email interview with Al-Monitor, Ben-Ami attributed the change in J Street’s standing to its success in deepening Israelis’ understanding that American Jews can feel real concern for Israel’s continued survival, its security and its designation as the national home of the Jewish people, and be attached to their brothers there, while “refusing to silently acquiesce to government policy which it deems illogical and contrary to Israel’s interest,” for example on the issue of the settlements and occupation. “This is a concept with which Israelis are familiar at home,” Ben-Ami stated. “Disagreements with government policy don’t mean you’re anti-Israeli, as long as they are based on sincere concern for Israel,” he stressed.

Ben-Ami notes that the arguments made by J Street leaders regarding the future of the territories echo the voices heard today from the heart of Israeli society — whether from politicians such as Livni and [former Prime Minister Ehud] Olmert or defense establishment leaders, such as the former heads of the Shin Bet security agency who expressed their opposition to the occupation in the documentary film The Gatekeepers. He believes his organization’s support for harsher sanctions against Iran, its opposition to a boycott of the settlements and to [unilateral] Palestinian moves at the UN, “proved that J Street is not a fringe group but rather a voice emanating from the very heart of the Jewish-American community.” Indeed, it is doubtful whether the organization’s leadership today would have made the controversial decision it made in 2011 to oppose a US veto of a proposed UN Security Council resolution condemning the settlements. It is also hard to imagine that an organization such as Sheikh Jarrah Solidarity would have been awarded this year’s J Street prize. Sheikh Jarrah Solidarity movement leader Sarah Benninga received J Street’s Honoring Our Heroes award two years ago.

Ben-Ami hopes that the [Sept. 28] annual conference of the peace organization he founded will stress the need for active US involvement in advancing an agreement between Israelis and Palestinians. The Syrian dilemma will be child’s play compared with the great Jewish-American dilemma. The test of divided loyalty, which J Street narrowly manages to evade in September 2013, will seem like a television game show if US involvement generates a peace agreement ensuring Israel’s Jewish and democratic character but entailing the traumatic evacuation of tens of thousands of Jews from their homes and the division of Jerusalem, Israel’s eternally united capital.