Hamas' only way out of its current crisis could be through reconciliation with Fatah. 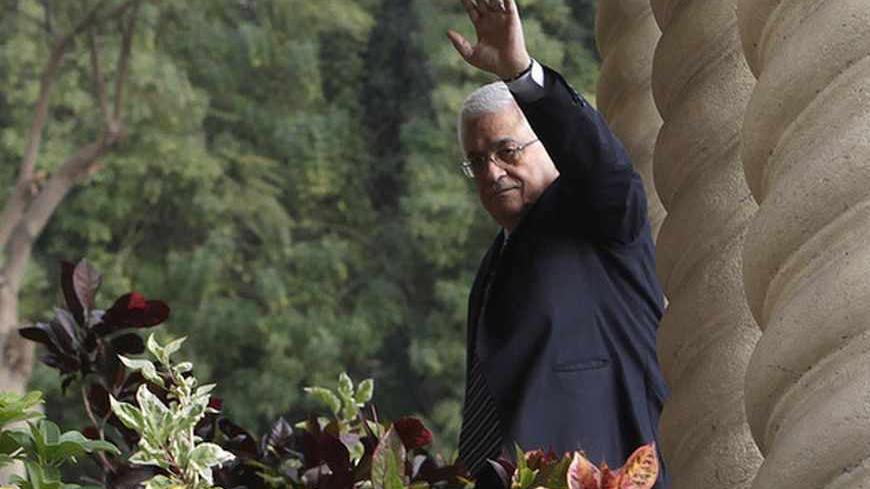 GAZA CITY, Gaza Strip — Since Egyptian President Mohammed Morsi's overthrow on July 3, the Hamas-led Gaza government has been suffering from a series of crises that could spell political suicide for the movement. Many believe that salvation is impossible unless Palestinian Authority President Mahmoud Abbas stretches his hand out to Hamas.

Regarding the likelihood of that happening, Al-Monitor met with the deputy foreign minister of the Hamas government, Ghazi Hamad, who believes the president can do a lot, whether at the level of ending the Rafah crossing crisis or protecting Gaza from acts of provocation. “In his capacity as president, Abbas has many responsibilities. I expected him to take more steps in Gaza especially after the blockade was tightened and the media attack [against Hamas],” he added. Hamad noted that Abbas had asked Egypt to open the crossing, but it was closed again two days later. “Rafah should remain open because of the urgent cases where people require medical treatment abroad,” he added.

“There have been calls with ministers in the West Bank and with officials in contact with the president. We are communicating with them since we consider the provision of services to the people a national obligation. We have conveyed exactly what is going on in Gaza, prompting the president’s own interest in the Strip,” Hamad stated.

The deputy foreign minister believed that the chance of Abbas intervening was still there. “This is not related to the situation in Egypt, negotiations or the weakness of any party. Reconciliation is a must. Many opportunities for reconciliation have been missed, including the one following the war last November, when the Palestinian Authority made gains at the UN,” he said.

He added that the solution must be based on a bold decision from both parties through an immediate implementation of reconciliation since it is a pressing issue. “Let us start with meetings and propose reconciliation to form a national consensus government. Let us set a date for the elections, especially in the absence of promising indicators for negotiations. There is nothing impeding us now,” he continued.

A Fatah source told Al-Monitor on condition of anonymity that Gaza Prime Minister Ismail Haniyeh met with the deputy prime minister in the West Bank and adviser to Abbas, Ziad Abu Amr, for lunch in Gaza in the presence of Minister of Social Affairs Kamal al-Shirafi and Minister of Health Jawad Awad in the Ramallah government. It is worth mentioning that they had visited Gaza several times in the past two months and planned to return next month.

The source added that there were letters sent by those officials to Abbas, most of which stem from Hamas’ desire to buy time before reaching reconciliation.

For his part, Fatah MP Faisal Abu Shahla said that Abbas has given several initiatives, old and new, to resolve the crisis and end their political rift, but Hamas refused. “Reconciliation will not happen before the sovereignty of law and pluralism are respected, the elections are held and divisions are halted.”

During an interview with Al-Monitor’s correspondent in the Palestine Liberation Organization (PLO) offices in Gaza, Abu Shahla highlighted Hamas’ intransigence. “Azzam al-Ahmad suggested to Moussa Abu Marzouk that they meet in Turkey or Beirut instead of Egypt. However, Hamas did not agree as the meeting was scheduled to be held on June 30, and was postponed due to the events in Egypt and to form a government of national consensus and hold elections.”

Abu Shahla added that the president demanded that the Rafah crossing be opened despite the current security conditions. His request was approved, according to the Fatah MP, and they coordinated to bring fuel and food into the Gaza Strip.

“Israel allowed construction materials into Gaza for the first time in six years. For its part, the Ramallah government offered to provide oil to the power plant for its purchase price without any added taxes. Hamas has yet to respond to these initiatives,” he added.

Egypt-based Palestinian author Mohammed Wahidi agrees that Abbas has put forth several solutions and opportunities for Hamas to be able to continue through ongoing calls for a comprehensive reconciliation. “Hamas should have held made use of this lifeline,” he told Al-Monitor via Facebook chat.

Wahidi believes matters have become more complicated. “How will Abbas extend a helping hand to Hamas, while it continues to reject it? Hamas is insisting on keeping 2 million Palestinians under blockade, amid a critical security situation in Egypt, because it would rather protect its partisan interests instead of the interests of its own people.”

This view is not unanimous, with some believing that there has been international pressure on Abbas preventing him from helping Hamas.

Salah Bardawil, a Hamas leader, said during a news conference he held with journalists on Sept. 5, and attended by Al-Monitor. “During our meetings with Fatah in May, an Egyptian intelligence officer informed us that Kerry would be coming to the region with one prerequisite to re-launch negotiations: to stop the reconciliation process, as actually happened afterwards.”

During the meeting organized by Hamas’ media apparatus, Bardawil added, “Abbas is a mysterious figure. He continues to stall after we thought he had rushed headlong into the negotiations.”

“The national project is burning away, and elections without reconciliation are meaningless and to no avail. Arab countries, be it Egypt or Saudi Arabia, have yet to pull concerted efforts to achieve reconciliation,” he said.

Political analyst Atef Abu Seif believes that Abbas should have extended his hand to Hamas and put forth the initiative the moment Morsi was deposed, so as to end Gaza’s current stalemate.

He thinks that it is too late because both parties have reached a point where they will no longer renege on their stances due to their pride. He added that no one encouraged the president to extend his hand to Hamas to save it from political suicide, and the latter did not heed any warnings to this effect.

Speaking to Al-Monitor, Abu Seif said that “Gaza is teetering on the brink of the abyss. No Palestinian party is trying to take the initiative to solve this as they are both caught in Egypt’s predicament. While one [faction] awaits the return of the Muslim Brotherhood to power, the other believes that the victory of the Egyptian army will bring political gains to its government in Ramallah and put an end to Hamas’ rule.”