Palestinians in the West Bank find themselves relatively unaffected by the storm raging in Syria. 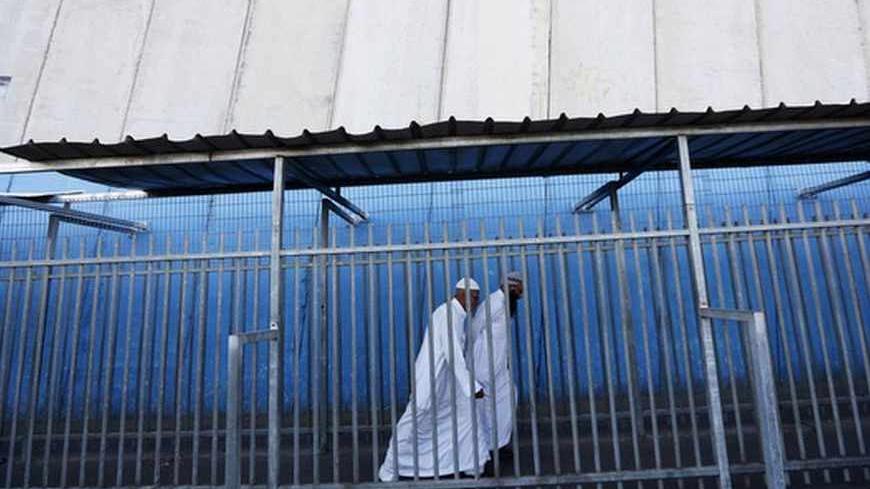 Palestinians walk near the controversial Israeli barrier as they cross into Jerusalem at an Israeli checkpoint in the West Bank town of Bethlehem, July 26, 2013. - REUTERS/Baz Ratner

For the first time in decades, a major confrontation is about to take place in the Middle East in which Palestinians are totally uninvolved. The expected attack against Syria and the potential for the widening of the theater of war to neighboring countries has so far totally excluded Palestine. One informal chart shows lines of support and hatred between the various countries and parties in the region, with no mention of Palestine and Palestinians.

Part of the reason for confidence that Palestinians will not be on the receiving end of any retaliatory attack is the simple fact that in all direct and indirect threats by the Syrian government against Israel, Turkey and Jordan, the Palestinians have never been mentioned. In fact, Syrians, and for that matter, many other Arab regional powers, are competing to support Palestinians the most.

Syria holds a political dilemma for the Palestinians. Palestinian refugees in the Yarmouk camp in Damascus, the largest in Syria, have been caught between both sides and suffered as a result. In the Aug. 21 chemical attacks, many Palestinians were reportedly killed, including two families from Jenin and Nazareth who lost a total of 31 family members.

Talking to Palestinians of all walks of life, one gets a sense of total relaxation regarding their own situation, though they are generally interested in the ultimate outcomes for the region. They watch Israelis rushing to obtain gas masks but make little protest that no one has thought of them.

This complacency might be misplaced. Although remote in distance, a possible attack on Syria could provoke retaliation that might fall dangerously close to Palestine. Palestinians still remember vividly the preparations for the Iraqi scud missile attacks. At first, Palestinians were caught up in the Israeli frenzy to create an environment safe from chemical weapons. But as they saw the scuds fly over the West Bank toward Israeli coastal towns, they went to their rooftops to see the missiles above their heads.

Palestinians working in Israel, however, are not in such a comfortable position. In recent years, the number of Palestinians from Jerusalem and the rest of the West Bank working deep in Israel has risen, and it is estimated that 80,000 to 100,000 Palestinians are now working there. The social problems and violence that Israelis have had with African workers has prompted Israeli employers to rehire Palestinian laborers, who return to their villages each night rather than linger in Israeli towns.

The situation for Palestinian citizens of Israel is also not so easy. Palestinians in the Galilee and in mixed towns like Haifa, Jaffa, Akko and Lod are not as apathetic, as they could easily become victims of a possible Syrian retaliatory attack.

Political analysts have largely discounted the possibility of a major Syrian retaliatory attack against Israel. While it has become customary to threaten the region’s biggest US ally, it is difficult to imagine the Syrian regime would risk its position only to make a political statement. Israel, while claiming neutrality to the current Syrian crisis, has publicly made it clear it will react forcefully to any attack against it. Syrians are quite aware the Israelis would not hesitate to respond forcefully to any attack.

While Palestinians wait to see the results of the current Syrian conflict, they are aware that peace talks are continuing with Israel, albeit in low profile and on a low burner. In a strange way, some Palestinians in the West Bank are glad that for once, they are not in the eye of a violent Middle Eastern storm.