Huseyin Celik, spokesman of the ruling Justice and Development Party, says if Mustafa Kemal Ataturk, the founding father of Turkey, was alive, he would not even allow the defense lawyers in the Ergenekon trials to "peel potatoes." 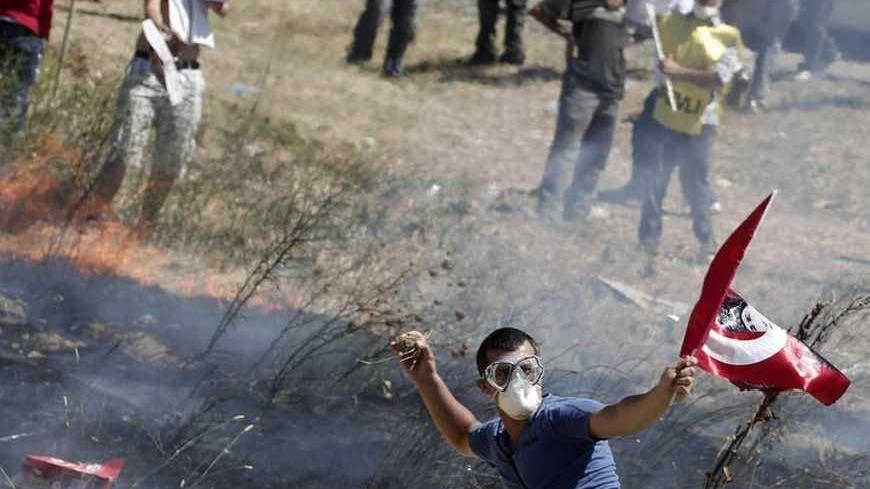 A protester prepares to throw a stone at Turkish riot police during clashes after protesters tried to march to a courthouse in Silivri, where sentencing of people convicted of attempting to overthrow Prime Minister Recep Tayyip Erdogan's Islamist-rooted government took place on Aug. 5, 2013. - REUTERS/Osman Orsal

On Aug. 7, ruling Justice and Development Party (AKP) spokesman Huseyin Celik responded cynically to reactions to Monday's Ergenekon verdicts. “The lawyers are shouting out at the [Silivri] courtroom, 'All places are Silivri, everywhere is [under] assault.' Who is coming under what assault? These are lawyers screaming out, 'We’re soldiers of Mustafa Kemal.' May [people] love soldiers like you,” he said.

“If Mustafa Kemal was alive, he would not even let you peel potatoes. Is it Mustafa Kemal on trial that you’re shouting out 'We are soldiers of Mustafa Kemal?' Is the republic Mustafa Kemal dreamed about the kind of a republic dominated by a network like Ergenekon? Why are you using and abusing Ataturk’s [name] for your own ends?” Celik continued.

Well said. But it would be equally wrong to forget that the AKP government did the same. Since Turkish Prime Minister Recep Tayyip Erdogan’s government came to power over a decade ago, the public's lingering question has been whether it is in a fight with the 1923 revolution, and therefore Ataturk; with Ismet Inonu, the country’s second president; or past military coups. Consciously or not, Erdogan has created this ambiguity and played into these national buzzwords, triggering the nation's past traumatic experiences. The question is not whether Turkey has dark pages in its history, but how it moves forward.

The Ergenekon trials promised hope in the beginning. As Sedat Ergin, a veteran journalist at Hurriyet Daily — and one who has read the record number of court documents — has written, things grew murky as the investigation and arrests broadened. “For instance, even professor Turkan Saylan, a cancer patient being treated in her home, was included in a terrorist organization investigation. The raids ... offended people’s consciences and showed that the process was taking on a political character,” he wrote in his Aug. 6 column.

“The investigation turned into a process that was taken hostage by other efforts to settle accounts. The revelation that Ahmet Sik, a journalist arrested in 2011 on charges of having aided the Ergenekon terrorist organization, had in fact written a book totaling 1,116 pages titled Who’s Who in Ergenekon was evidently yet another important point of disrepute the case had in the eyes of the public,” he further wrote.

The more the investigation broadened — including early-morning raids on people’s homes and authorities making public telephone transcripts that were irrelevant to the case — the more people became confused and began to question authorities' intentions. Many wondered whether the “deep state” that they thought was behind them was actually just changing hands.

“The Ergenekon trial in this way has come before society as a virtually insoluble legal conundrum, in which rights and wrongs have been mixed together, and in which the legal errors and injustices committed cast a serious shadow over the concept of justice,” Ergin concluded. “The decisions announced on [Monday, Aug. 5] contain within them, in this context, serious dilemmas and contradictions. No matter how much the initial period of the investigation was based on just and legitimate reasons, there are sufficient reasons to think that there are a good many defendants who have suffered injustice as a result of these verdicts.”

On Aug. 6, the Turkish military also issued a written statement, noting that it “shared the sadness of the convicted former comrades and their families.’’ For the military, which has fully cooperated with the investigation, this would be the first time it has publicly questioned whether the men in uniform have received a fair trial in civilian courts. This has the potential to create tension within civilian and military relations. The path ahead is not yet a settled score.

“As the Turkish armed forces, we believe, based on our respect for the supremacy of the rule of law, and the principle of fair trial, that this proceeding will be finalized according to a conclusive fair judgment,” the statement read, pointing to the fact that they expect the High Court of Appeals to look into the case with a fresh eye.

Mehmet Ali Pekguzel, a prosecutor in the case, announced he will appeal the case on the grounds that some of the convicted have received less time in prison than the prosecutors demanded. The prosecutor's office, for example, requested life in prison for Mehmet Haberal, an internationally renowned surgeon and founder of Baskent University in Ankara. Although Haberal was convicted, his sentence was reduced to time served due to his poor health. Haberal is also an elected deputy to the Turkish parliament from the opposition Republican People’s Party (CHP). The opposition raised strong objection to the court’s verdicts; AKP spokesman Celik then cynically posed the question as to whether the CHP would prefer to overturn the court’s sentencing decision on Haberal.

The conscience of the people will ultimately have the last word on these proceedings. “From a human rights point of view,” wrote Emma Sinclair-Webb, a senior Europe researcher at Human Rights Watch, in The New York Times, “a key disappointment of the Ergenekon trial was that it did not represent progress toward holding public officials, military, police and civil servants accountable for their actions in a way that will resonate with the public across the political divide, and that it did not serve to promote a more democratic culture.”

One may also conclude that the hopes for a society free of the “deep state” will further dim with the recent verdicts. This means that things may even worsen now in terms of seeking a country respecting the supremacy of law. Put simply, individuals with differing views from the ruling government may find themselves feeling less secure over time, choosing silence as their best defense. This is not the way to talk about a democratic Turkey, and the government must claim responsibility in clearing the air of these kinds of concerns and worries. In an environment where freedom flourishes and democracy strengthens, Celik will make the lawyers' slogan of “We’re soldiers of Mustafa Kemal” irrelevant.