In an exclusive interview, senior Syrian Muslim Brotherhood leader Ali al-Bayanouni says, "There is no room for a political solution" with the regime of Syrian President Bashar al-Assad. 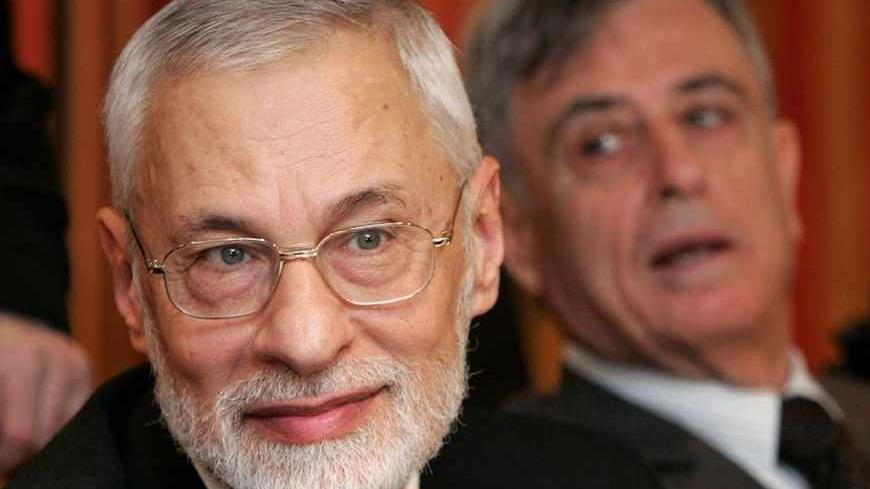 Ali al-Bayanouni, the deputy controller general of Syria’s Muslim Brotherhood and the group’s former long-serving supreme guide, said that the expected US strike on the Syrian regime is not intended to protect civilians following the Ghouta chemical massacre, but to serve US interests in the region. He also denied the Brotherhood has been briefed on the proposed strikes by Western powers.

Bayanouni, 75, gave an exclusive phone interview to Al-Monitor from London, where he has been living in forced exile for 34 years. He said that the Syrian Muslim Brotherhood has no military formations of its own in the revolution, but that it supports any centrist or moderate party that defends civilians against the regime’s practices and violations.

Regarding Egypt, he said that Saudi Arabia erred in supporting the coup against the legitimately elected President Mohammed Morsi, because that coup was a setback to the democratic experience and threatens the region's Arab Spring. He blamed the differences among the Syrian nationalist forces on foreign interference by some countries.

Below is the full text of the interview:

Al-Monitor:  What results do you hope to achieve in case of a US military strike against the Syrian regime?

Bayanouni:  We still have serious doubts about the United States and European Union positions toward the Syrian revolution because of what happened in Syria over the past two and a half years, which witnessed many violations, including the use of chemical weapons by the regime against civilians, with us hearing only timid condemnations. So why the sudden change now? We, the Syrian Muslim Brotherhood, hold the international community responsible for failing to protect Syrian civilians, especially after the killing of 200,000 martyrs and the displacement of millions of people.

We ask: Why are you talking about a military strike against the regime at this particular time? Did a global awakening of conscience spur the world armies to move? We believe that Western countries, especially the United States, decided to move against Syria now to serve [US] interests only. If the Americans are acting to save the Syrian people, as they claim, then they would have acted a long time ago. We have no information about the nature of the strike outside of what is being reported in the news.

Al-Monitor:  How will the Syrian Muslim Brotherhood deal with the United States in the future?

Bayanouni:  Unfortunately, we consider the US position on the Syrian revolution to be negative. So are some European positions. Because only after more than two years since the outbreak of the revolution, and tens of thousands of martyrs, did the West start considering a military strike against the Syrian regime. So the United States didn’t deal with the Syrian revolution on the basis of public freedoms and self-determination for the Syrian people, but rather on the basis of [US] interests. The United States believes that its interests in the region depend on maintaining military dictatorships that respond to [US] requests without taking into consideration the opinion of the people and their elected representatives.

Al-Monitor:  The Muslim Brotherhood is considered among the strong supporters of the armed rebellion against the Syrian regime. Do you favor a political solution that is based on the framework of the Geneva conference? Will you attend the upcoming Geneva II conference? And if so, under what circumstances?

Bayanouni:  The Muslim Brotherhood in Syria believes that there is no room for a political solution with this regime because it has rejected all political solutions offered previously. If the purpose of this conference is to allow the regime to impose its conditions and demands on the opposition by sitting with it, then we reject that, because the revolution will continue till it achieves its objectives, which were set on the first day of its launch. As to whether we will participate in the Geneva II conference, the Muslim Brotherhood cannot sit with Assad and his military group at the same table because our main demand is his complete departure before sitting down at the political solution table.

Al-Monitor:  It is clear that the Syrian opposition abroad, including the Muslim Brotherhood, has failed to overcome its internal differences and present a unified strategy to lead the revolution. How do you see the Syrian National Coalition?

Bayanouni:  From the first moment of the outbreak of the revolution in Syria, the Muslim Brotherhood has sought to form a national framework for the revolution. And we had a key role in forming the Syrian National Council. And we stressed, more than once, that we are with any political formation that works to unite the revolution’s forces. At the same time, external interference caused these differences among the components of the Syrian revolution, noting that the various national revolutionary forces agree on all [the revolution’s] objectives and on preparing for the transition after the regime’s fall.

Al-Monitor:  What about your relationship with the Free Syrian Army and Jabhat al-Nusra?

Bayanouni:  It is important to emphasize at the outset that the Brotherhood has no armed military formations in the Syrian revolution. But at the same time we encourage any national revolutionary party that is defending the Syrian people and protecting the civilians in the face of this regime. Our support doesn’t distinguish between one group and another, but we focus on the armed groups that are centrist and moderate.

Al-Monitor:  The conflict in Syria is increasingly taking on a sectarian dimension. Do you think that the Muslim Brotherhood is working to stop the fueling of the sectarian discourse?

Bayanouni:  Since the Muslim Brotherhood knows the nature and diversity of Syrian society, it has advocated from the outset the establishment of a civil state that can accommodate everyone, where all Syrians have the same rights and duties, while noting that the Syrian people have no sectarian tendencies because it is a society that is mostly Arab and Muslim, along with religious, ethnic and sectarian minorities. However, [the Syrian people] have never seen conflicts between minorities before the advent of the current Assad regime, which has made unremitting efforts to consolidate its survival in power by playing on [societal] contradictions and by [inciting] the Syrian minorities against each other.

Al-Monitor:  What about the Muslim Brotherhood’s call to apply Islamic law in Syria?

Bayanouni:  The Muslim Brotherhood has already asserted, on more than one occasion and in several political charters and historical declarations (including the 2002 National Honor Charter, the 2004 Political Project [Declaration] and the 2012 Covenant and Charter), in calling for the establishment of a modern civil state that is based on democracy without exclusion or dictatorship against the Syrian components. We call for a citizenship that is based on Islamic principles and that grants all Syrians full equality in rights and duties. We even demand that the constitution be consensual. It is not permissible for the majority to impose the constitution on the minority. After the fall of the Assad regime, the Muslim Brotherhood in Syria seeks to implement its program, which is based on the Islamic reference, without imposing it on the rest of the Syrians by force or coercion. But we will resort, along with all political contestants in Syria, to the ballot box.

Al-Monitor:  To what extent did the fall of the Muslim Brotherhood in Egypt affect you? And to what extent did it contribute to reducing the chances that you will be a prominent player in Syria’s future?

Bayanouni:  The military coup in Egypt did not only affect the Syrian Muslim Brotherhood, but it affected the whole region and the Arab Spring, because the coup was against democracy, pluralism and freedom. And therefore the coup is not considered a problem only for the Muslim Brotherhood in Egypt, but also for the Egyptian people and the rest of the Arab revolutions. The lesson of the coup in Egypt showcases the need to accept the results of the ballot box whether or not those results agree with one’s orientations, because what happened was a clear military coup against the constitutional parliamentary democratic legitimacy. So it is both normal and expected that the Syrian Muslim Brotherhood would be affected by it, because they are an essential part of the Syrian opposition. We consider the Egyptian coup to be a setback for the Arab democratic experience.

Bayanouni:  We believe that Saudi Arabia has erred by supporting the Egyptian coup, which was against democratic practices. I think that the day will come when Saudi Arabia will reconsider [what it has done] because it has no interest in having a military dictatorship built on the ruins of the democratic experiment.

Al-Monitor:  But some think that Saudi Arabia is trying to marginalize the role of the Muslim Brotherhood in Syria.

Bayanouni:  The Muslim Brotherhood in Syria is a key component of the national opposition and a main part of Syrian society. No one can marginalize it. [Late President] Hafez al-Assad tried. And so did his son afterward by issuing laws requiring the execution of anyone connected to the Muslim Brotherhood. But despite that, they failed. Also, during our visits to many of the areas liberated from the Syrian regime’s control, Syrian citizens greet us with a lot of warmth and happiness, because they know that the Muslim Brotherhood has a moderate and centrist political thought. So the Muslim Brotherhood’s role will not be contained by a decision from a state or by a government position.