Kurdish National Council: We must remove the top of the pyramid in Syria

In an interview with Al-Monitor, the head of the Kurdish National Council, Ibrahim Biro, talked about his party’s opposition to the Syrian regime, and stressed that a federal system is needed in Syria to integrate all of Syria’s sectarian and ethnic components. 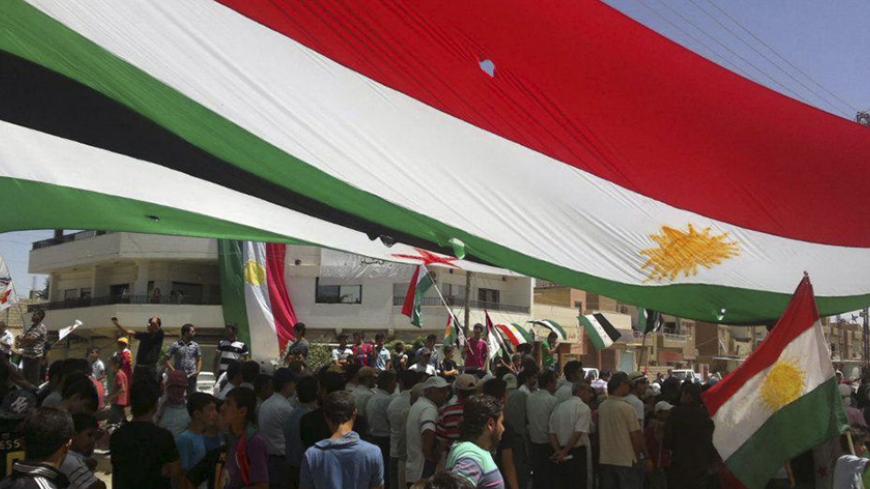 In an interview with Al-Monitor, Biro talked about the Kurds’ status quo in Rojava.

Al-Monitor:  What have the Kurdish parties in Syria accomplished in their capacity as opponents of the Syrian regime since the outbreak of the revolution?

Biro:  Our opposition to the Syrian regime did not happen overnight. We have been opposing it for 50 years. We have always demanded the rights of the Kurdish people. In the Syrian revolution, we played a pivotal role in the ranks of the Syrian opposition when none of the Syrian provinces or people were against the regime. We worked within the ranks of the opposition during the breakout of the revolution, and we were at the forefront of this revolution to change the regime and bring a democratic one instead that guarantees the national, religious, sectarian and political rights of all Syrian people.

Al-Monitor:  You have asked the Syrian regime to recognize the Kurdish people in the constitution, but at the same time, you refused to meet with the Syrian president. Have the circumstances changed regarding the Syrian side’s recognition of Kurds?

Biro:  At the beginning of the revolution, we dealt with the Syrian situation from a general perspective rather than considering the Kurdish interests specifically. Like all the other opposition parties and neighboring countries, we expected the Syrian regime to fall within a few months. We had to be in the opposition ranks, especially since the regime did not announce a constitutional recognition before asking to meet with us. It did not show good intentions either. The regime asked to meet with the Kurdish party and asked the Kurds to maintain impartiality between it and the Syrian revolution.

Al-Monitor:  Tell us about your relationship with the Democratic Union Party [PYD], which declared democratic self-governance [in January 2014] in alliance with some other powers in the region. What’s your take on this decision and its rules?

Al-Monitor:  The PYD and its allies accused you of being under Turkey’s control since you joined the Arab opposition. What do you have to say about these accusations?

Biro:  This is not true. They [the PYD and its allies] are also part of the National Coordination Committee for Democratic Change. This committee does not have a clear stance vis-a-vis the Kurdish case. On the contrary, the Syrian National Coalition has clearer stances. The Kurdish National Council did not join the Syrian National Coalition based on the request of or pressure from Turkey or any other state. We consider Turkey a neighboring country. But we based our decision to join the Syrian opposition on Syrian and Kurdish interests in Syrian Kurdistan, and we signed a document including clear provisions that recognize the rights of the Kurdish people.

Al-Monitor:  You announced the establishment of the Kurdish National Council in Syria as a Kurdish political movement. Why? Did you succeed in uniting the Kurdish parties under that umbrella?

Biro:  The declaration of the Kurdish National Council has advantages and disadvantages. We united under it to summarize the individual work of parties. But the downside was the dysfunction in team work. We lagged behind in several sectors, but in general, we believe the council is the headline for solving the Kurdish issue, and we will keep walking down that path.

Currently, the Kurdish National Council is being politically active and we will focus on military work, depending on the decision of the council’s sixth conference. We have a military force formed of thousands of peshmerga members who are trained and ready in Iraqi Kurdistan. I think the situation will change in the coming stage.

Al-Monitor:  You refused to be part of the Arab opposition in the past, but now you are part of the Syrian National Coalition. Were you recognized as a Kurdish national entity, and as a result, you joined the coalition?

Biro:  Our disagreement with the Arab opposition always stemmed from the non-recognition of our national rights as Kurds, and the vague stance in our regard and the lack of a political solution for the Kurdish issue in Syria. In the document we signed with the coalition, there are clear provisions about the recognition of Kurdish nationalism and the form of the next Syrian state’s regime.

Al-Monitor:  How do you see the future of the Kurdish region in Syria? Are you still calling for a federal regime in post-Assad Syria? Do you have future political projects?

Biro:  We insist on this demand, because a federal system is the only guarantee for the rights of all sectarian, religious and national components of Syria. After all this killing and destruction, Syria cannot be a central state like the previous eras. I believe our Kurdish regions have a good future in case the Kurdish National Council and the PYD reach consensus. There will be multiple gains for our people in their regions. But if there is no agreement, we will have other choices in the Kurdish regions.

Al-Monitor:  Do you think President Bashar al-Assad will last long?

Biro:  I don’t think Assad will hang on much longer. There must be a regional and international solution to change the head of the regime, just like [former Prime Minister] Nouri al-Maliki was toppled in Iraq on Aug. 14, 2014. We must remove the top of the pyramid in Syria.

In conclusion, the Kurdish National Council in Syria is still trying to find escapes from its internal crisis, especially after some Kurdish parties split from it and joined the PYD, adopting the self-governance project. Those consider this project the Kurds’ chance to receive some of their national rights under an opposition that refuses to do so and a regime that has not until now issued any statement about the Kurdish situation in Syrian Kurdistan.