The decision by Israel and the Palestinians to put any final deal to referendums will have a profound influence on the negotiation process. 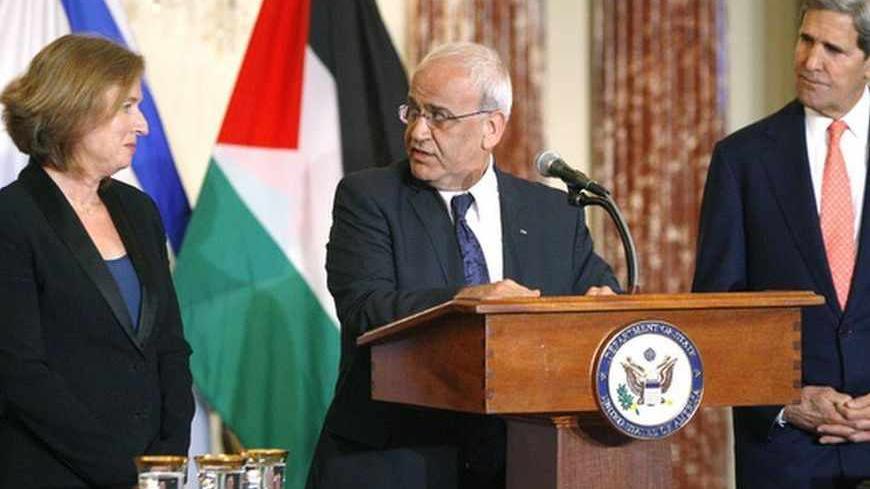 During the difficult reconciliation efforts between the Palestine Liberation Organization (PLO) and Hamas, a resolution was found to deal with the issue of talks with Israel, which the latter refuses to recognize. The Hamas leadership conceded that the PLO could negotiate with Israel provided that any agreement reached is put to a public referendum.

A similar decision to hold a referendum in Israel has also been agreed to by Prime Minister Benjamin Netanyahu and some of his right-wing coalition members opposed to a two-state solution. The Israelis' decision seems more unusual than the one by the Palestinians.

Normally, when leaders of sovereign countries reach a deal with a foreign entity, the executive branch initials the agreement and then the accord is ratified by a vote in the country’s legislature. That is what Israel did when Prime Minister Menachem Begin signed the landmark Camp David agreement with Egypt in 1978 and what Prime Minister Yitzhak Rabin did when he signed the memorandum of understanding with the PLO in 1993 and the Wadi Araba peace agreement with Jordan in 1995. The Jordanian parliament approved the latter as well.

Even though the people are the source of authority in a democracy, it is not clear whether resorting to a national, popular referendum is a sign of strength or weakness by political leaders.

In the Palestinian context, it can be argued that the referendum is an insurance policy against a leader being boxed in by international powers and forced to sign a bad agreement. The hope would be that the people will then have the strength in numbers to reject it at the ballot box.

Historically, however, while some referenda have resulted in rejections, the measures are often approved. Statistics for referenda in Australia since the 19th century, for example, show a majority of approvals. Leaders are generally unwilling to sign an agreement they think will be rejected by the people. To do so would be highly embarrassing and signal an inability to judge the people that they claim to represent.

Another complication in the Palestinian context mandating a referendum is that the current negotiating leadership has lost its electoral mandate. The term of President Mahmoud Abbas expired years ago. Although Abbas has been trying hard to resolve the Hamas–Gaza problem, including holding new elections in which he says he will not run, it would make sense to put a historic peace agreement with Israel to the Palestinian public for a vote.

That the result of the planned nine months of negotiations will be put to a vote will partially resolve the unpopular decision by negotiators to keep the details of the talks secret. Nothing worries a skeptical public more than agreements made behind closed doors. Keeping the talks private certainly gives negotiators some necessary maneuverability, but at the same time it permits them to play god regarding the lives, properties and futures of ordinary Palestinians. Having the public vote on the agreed-upon deal will guarantee some form of collective decision making, rather than allowing what might be private interests to trump public needs.

One vague issue regarding the Palestinian referendum is the question of who will be allowed to participate. Will it be limited to people west of the Jordan River or open to all Palestinians, the majority of whom live in the diaspora? How the issue of the right of return is finessed could play a spoiler role if Palestinians in the diaspora can vote. Also, will the residents of East Jerusalem be allowed to participate? In the past, Israel has balked at East Jerusalemites participating in elections except in the form of absentee voting or traveling to polling stations outside the city’s limits. Nearby Arab countries will also be unlikely to allow Palestinians living there to participate in such a referendum.

If one is to make predictions as to how Palestinians in the areas occupied in 1967 will vote, it is highly likely, based on the most recent Gallup poll, that they would support a two-state solution without insisting on full implementation of the right of return and the sharing of the holy city of Jerusalem, so long as Palestine will be truly free and independent. Polls in Israel show a similar moderate trend toward the above parameters of the two-state solution.

Another question is whether the two referenda will take place on the same day or on different days. In addition, what would one community do if the other side votes "no?" Would it cause irreparable damage? How would such a scenario affect the chances of going back for talks to renegotiate what would have been an amicable agreement? Holding the votes on the same day seems the appropriate approach in this situation.

As Palestinians and Israelis prepare for talks that they have agreed will be private and will last at least nine months, it will be interesting to watch how the issue of an eventual, simultaneous popular referendum will influence those inside the negotiating room. It is hoped that the fear of a "no" vote by either side will help them reach an agreement with which they and their people can live.