The Muslim world is in the throes of a messy period of political modernization, which means the issue of the role of religion in the state is being debated, and fought, in the public square. 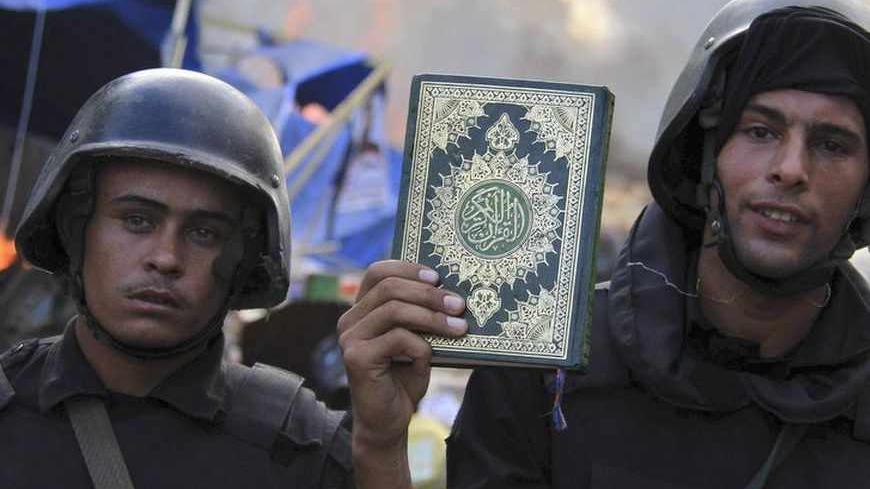 Riot police hold a copy of the Quran as they clear members of the Muslim Brotherhood and supporters of deposed Egyptian President Mohammed Mursi, from Rabia al-Adawiya Square, where they were camping, in Cairo, Aug. 14, 2013. - REUTERS 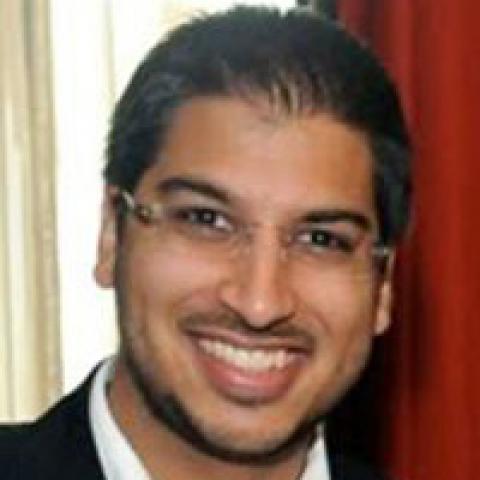 On June 8, a devastating clash between residents and militia members erupted at the headquarters of the Libya Shield Brigade in Benghazi, Libya, leaving dozens dead and scores more injured. Meanwhile, the next day on the Sunday talk show circuit in the United States, amid continued partisan discussion of the September 2012 consulate attack in Benghazi, there was scant mention of the major clash from the day before. The disconnect exemplified the chasm between the new battle lines on the ground across the Middle East and the political discourse a world away.

For much of the last decade, most have digested the narrative of a Muslim-West divide. It was so pervasive that newly elected US President Barack Obama, portrayed as a symbolic messiah bridging two worlds, was awarded a Nobel Peace Prize before even completing a year of his term. Twelve years after the 9/11 al-Qaeda attacks, much of the discussion about the "Muslim world" has internalized this language, and why not? The conflict between the Palestinians and US-supported Israel remains unresolved, US drone strikes continue unabated in Pakistan and Yemen and terrorist attacks like the Boston Marathon bombing are still occurring in deadly fashion.

These days, however, one is more likely to see the burning of a Syrian government flag than an American flag amid the world’s deadliest ongoing conflict, for which the United States is criticized primarily for not intervening. One is more likely to see Iraqis killed in a terrorist attack than Americans. In fact, in recent years approximately 90% of terrorism-related fatalities have been Muslim. One is more likely to see the demonization of a Shiite than a Jew by an extremist Muslim ideologue. The battle lines have shifted from Islam versus the West to Muslim versus Muslim, and it is time for politicians and pundits in the United States and the Middle East alike to catch up.

With the end of the Soviet war in Afghanistan — in which the Americans and Muslim jihadists were allies — and the fall of the Soviet Union, a new dynamic began to set in. The 1991 Gulf War raised the specter of an American hegemon and also led inadvertently to the development of al-Qaeda as an anti-Western force. Over the next two decades, underlined by the 9/11 attacks, the notion of Samuel Huntington’s clash of civilizations appeared to be coming to fruition. With the Iraq and Afghanistan wars in full throttle, alongside the second Palestinian intifada, this divide sharpened in the early 2000s.

Yet, under the surface, something else was brewing. While the notion of fitna (intra-Muslim strife) is considered a grievous sin in Islam, it has been an omnipresent reality since the advent of the faith. Al-Qaeda’s own ideology was based heavily on the writings of Sayyid Qutb, the Muslim Brotherhood leader executed in 1960s Egypt. Qutb had, in turn, borrowed heavily from the 14th-century theologian Ibn Taymiyyah, both of whom promoted intra-Muslim violence. The basis of the call to jihad was not against the West, but rather against "un-Islamic" regimes, even if they were helmed by Muslims. Embedded in al-Qaeda’s fight was a rejection (takfir) of regimes within the Muslim world. The United States and its Western allies were targeted for being the guarantors of these governments in the eyes of al-Qaeda.

The 2003 US-led invasion and occupation of Iraq further blurred the battle lines, as al-Qaeda began to apply this notion of takfir to non-state actors, in particular to Shiite groups, contributing to growing intra-Muslim violence. An atmosphere of sectarianism also enveloped the broader region, partially encouraged by various regimes attempting to shore up their power base and accentuated by various conflicts with sub-state militias, such as in Lebanon and Yemen. In 2008, Hezbollah leader Hassan Nasrallah, Syrian President Bashar al-Assad and Iranian President Mahmoud Ahmedinejad were regarded as the most admired leaders in the Arab world. Subsequent events and sectarian strife have made such a result today inconceivable.

Yet, it was the Arab ‘spring’ and its aftermath that moved the Muslim versus Muslim dynamic away from the extremist fringe and sectarian bully pulpits and into the minds of mainstream Muslims, albeit in a different form. The ripping open of the political space in Egypt, Libya, Yemen and Tunisia has brought contestation for power into play, and in the spotlight stands the debate over the role of Islam. Since the July overthrow of the Muslim Brotherhood government in Egypt, the political discourse has been toxic at best and fascist (in all directions) at worse. Many of the Brotherhood's political opponents demonize its supporters as traitors and as not being Egyptians. Conversely, many Brotherhood leaders have labeled their opponents enemies of Islam.

Similar battle lines have emerged in Turkey, following protests in Taksim Square, and in Tunisia, following the assassination of a second secular politician. All this has resulted in three concurrent battle lines pitting Muslim against Muslim across the region: militants versus the state, Shiites versus Sunnis (and Salafists versus Sufis) and secularists versus Islamists. While this last front is seemingly the least violent for now, it is the most volatile and has the most potential for wholesale disruption. These battle lines — in many ways new versions of old divisions — have collectively displaced the Islam-West dynamic from its perch.

Most of the Muslim world has not undergone a period of (neo-)enlightenment, and many countries are just now entering the messy period of political modernization. This means the fundamental issue of the role of religion in the state is being debated, finally, in the public square rather than in the castle or an ivory tower.

So, fasten your seatbelt, because it’s going to be a long, bumpy and, unfortunately, violent ride.

Taufiq Rahim is a Dubai-based political analyst. He blogs regularly on The Geopolitico. On Twitter: @thegeopolitico