Blast in Beirut Sparks Fears Of 'Iraqization' of Lebanon

For the second time in just over a month, a major bomb attack has hit Hezbollah's stronghold in Beirut's southern suburbs. 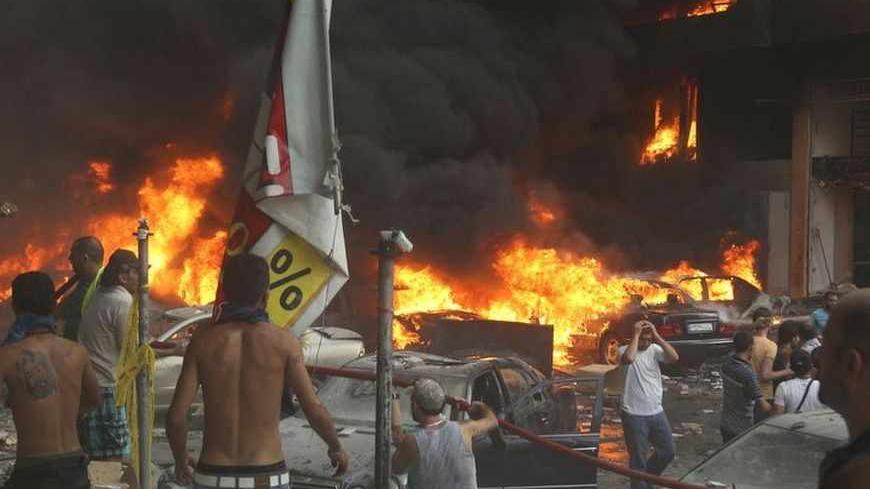 People gather around the site of an explosion in Beirut's southern suburbs, Aug. 15, 2013. - REUTERS/ Hasan Shaaban

Circles close to Hezbollah have not ruled out the possibility that a suicide bomber was behind the blast that struck Beirut's southern suburbs Thursday afternoon [Aug. 15]. They maintain the possibility that it was a suicide bomber who blew himself up in a car bomb, the Iraqi way. This augurs in a new phase of heated developments in Lebanon, which some have predicted for a while, based on several indicators.

This latest explosion was the second of its kind in just more than a month. On July 9, a car bomb exploded in a densely populated neighborhood of Beirut's southern suburbs, the majority of whose residents are Shiite. The two incidents, however, differ in the size of the blast and the number of victims. While the first bombing only resulted in a few injuries, the second explosion was very large and resulted in dozens of casualties. There are reports of about 20 dead as of the time of this writing.

It's worth noting that after the first explosion in July, partisan and civil authorities implemented strict preventative measures in Beirut's southern suburbs, including banning unidentified cars from parking on the side of the road in this area. Furthermore, civil groups distributed forms to the area's residents, requesting a comprehensive survey of the residents and their cars — including the type of car and license plate number — which would help them to monitor any strange, unidentified or suspicious car.

In the weeks that followed the first explosion, citizens traveling through the southern suburbs and surrounding areas noticed the presence of a number of youth equipped with wireless communications devices at each entrance to the region. They were constantly present, monitoring passing cars and occasionally stopping cars to check the identities of the passengers if anything seemed suspicious.

These actions strengthened the belief among those close to Hezbollah that Thursday's blast was a terrorist attack, after security procedures were tightened in a way that nearly prevented any attempt to park a strange car in any part of the region. Note that the southern suburbs of Beirut represent a narrow geographic strip, not exceeding an area of 28 square kilometers [10.8 square miles], inhabited by half a million people.

Yet, what motivates these circles even more to believe that it was a suicide bombing are the following indicators:

First, an audio recording was aired by several jihadist Islamic websites on July 31, and featured al-Qaeda leader Ayman al-Zawahri violently attacking Hezbollah. Zawahri lashed out at the latter's secretary-general, Hassan Nasrallah, because members of this Lebanese Shiite organization participated in battles on Syrian territory adjacent to Lebanon, which is inhabited by Syrian and Lebanese Shiites.

Second, it was reported on Aug. 3 that a Sunni Lebanese citizen from Tripoli, identified as Moatasem Hassan, died on the outskirts of the Syrian city of Homs after carrying out a suicide attack on soldiers from the Syrian regime army. Following Thursday's explosion, Lebanese media outlets aired photos and reports about "celebrations" carried out by Sunnis in Tripoli, "delighting" in the explosion that hit the Shiite southern suburbs. The latter fired shots into the air in joy and handed out candy.

Third, a video appeared on YouTube, showing a group of masked people calling themselves "Aisha, the Mother of the Believers, Brigades for Foreign Missions." In the video, which appeared shortly after the explosion, the group claims responsibility for the attack and threatens to carry out similar operations. The group’s name clearly indicates a sectarian Sunni affiliation, and is evidence of the sectarian background of those calling for violent targeting of Shiites.

Fourth, several officials within the Syrian armed opposition have issued statements threatening to transfer the battle to Lebanon, and specifically to Hezbollah areas, in response to the latter's participation in the Syrian battles.

Fifth, there has been a series of bombings caused by improvised explosive devices planted on the side of the international highway between Beirut and Damascus, near the Syrian-Lebanese border. It has been said that these IEDs were targeting convoys carrying Hezbollah members. Meanwhile, some officials within the Syrian armed opposition have rushed to claim responsibility for these bombings.

Based on all these developments, there is an impression in Beirut that the Syrian war has truly moved to the heart of the Lebanese capital. What's most dangerous, however, is that this impression carries with it the fear that these are the first signs of an attempt at the "Iraqization" of the Lebanese arena, something that can be further confirmed if it is proven that Thursday's bombing was a suicide attack.