Retired Israeli Ambassador Yaakov Levy has sharply criticized Israel’s policy on Europe, a warning to Jerusalem that it had better examine its actions. 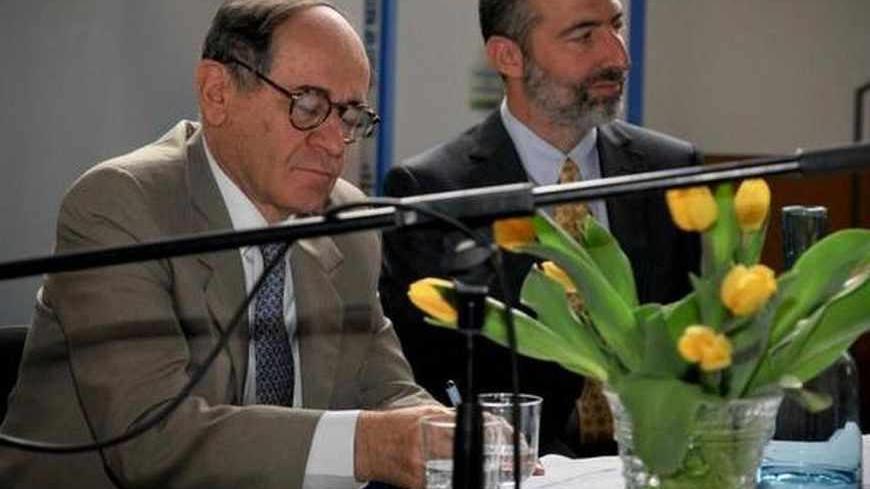 Few senior officials may be said to represent the quintessential civil servant — the public official who performs his role with impeccable professionalism — as does Yaakov Levy, Israel's outgoing ambassador to the Czech Republic. And when a loyal advocate of the state of Israel like Levy sharply criticizes the government’s policy on Europe, then the policy-makers in Jerusalem had better examine their actions — and all the more so their failures.

In recent years, the Czech Republic has emerged as Israel's most consistent supporter. It was the only one of the EU member states to have voted in September in the UN General Assembly against the Palestinian Authority's bid for recognition as a non-member observer state.

“There is a limit to the support Israel can expect in international forums, even on the part of a friendly country like the Czech Republic,” warns Levy in an exclusive interview to Al-Monitor, the first he has given since returning home following his retirement. “You cannot expect the Czech Republic to stand by our side forever, as our sole supporter [in the European Union].”

Levy believes that progress, however minor, in the revived negotiations with the Palestinians will make it possible to mobilize a number of European countries that would form, along with the Czech Republic, a European bloc in support of Israel. At the same time, Levy is quick to caution that, “In the absence of hope for the settlement of the conflict, the relations between Israel and Europe may continue to erode."

He said, “The term ‘territorial scope’ [steps decided upon by the EU against companies and organizations that maintain ties with the settlements] should serve as a warning sign to Israel.”

Levy, who packed away his tailcoat and loosened his tie at the end of July following five years of service as ambassador in Prague, is an old acquaintance of mine. We served together on the same military base. We stayed at the same student dormitories and shared a kitchen. Ever since, I followed his diplomatic career — from the Foreign Ministry cadet training course to the Israeli Consulate in Boston; from the embassy in Rome to his position as Israel’s ambassador to the UN International Organizations in Geneva; and from there, to his role as deputy director-general for public diplomacy at the Foreign Ministry; and, finally, to his recent diplomatic mission in Prague.

Wherever he served, Levy was lauded by all parties and ideological sectors for his absolute loyalty to those who sent him on his mission. All through his long years of service, he took care to keep a cool head and maintain a low profile. Any criticism that he had, particularly on settlement policies — the source of tension with Europe — he held back, voicing it only in internal discussions. Today, for the first time, Levy allows himself to let off steam:

Al-Monitor:  What does the recent step of the EU countries portend for Israel? Are you concerned that Europe will not make do with a boycott of the settlements and go as far as to impose sanctions on Israel?

Levy:  I am not expecting an all-out embargo by Europe. I am troubled, however, by the possible measures various entities may take, which are liable to gather momentum under certain circumstances. Political and diplomatic vigilance is therefore called for. The declarations by Israeli officials dismissing any prospects for negotiations, or the calls on Europe [by Prime Minister Benjamin Netanyahu and former Foreign Minister Avigdor Liberman] to deal with other issues, such as Syria and Iran, are not favorably viewed in Europe. My interlocutors in Prague respond to such statements with European politeness, which is not always understood in Jerusalem. The message they are actually delivering is this: You should focus on resolving your conflict rather than diverting the discussion to other, more convenient issues.

The bombastic declarations by Israeli politicians, which are aimed at the Israeli public, reverberate negatively in Europe and undermine the sympathy for Israel. The same holds true with respect to the threats of military moves against neighboring countries, whether nearby or far off. Europe, which does not believe in military solutions, is revolted by such statements. As to one-sided steps such as those taken by the minister of defense against European diplomats, they are certainly not helpful, to say the least. As a diplomat with a track record of four decades of service, I believe that a dialogue is to be preferred, especially with a body like the European Union, with which we have deep relationships on a variety of levels that are of importance to Israel.

Al-Monitor:  How would you explain the special sentiments of the Czech Republic toward Israel?

Levy:  It must be admitted that many Europeans are skeptical regarding our willingness to reach an arrangement. However, the Czech Republic treats us differently from the other EU member states. I expect it to even oppose the recent move against the settlements. In fact, rather than laying the full responsibility on Israel, many of my Czech interlocutors doubt the Palestinian willingness to reach an arrangement. The Czech Republic considers sovereignty to be something that cannot be taken for granted, as a fragile asset that must be preserved at all costs.

Like Israel, the Czech state once had powerful and aggressive neighbors. Due to lack of alertness and indecisiveness, it lost its sovereignty several times. The Czechs see Israel in its present situation in the region as reflecting their historical situation, and they are well aware that any misjudgment could lead to its loss of sovereignty for long years. Yet, the main lesson the Czechs have learned from the UN General Assembly vote is that we should not leave them alone in their support for Israel.

Al-Monitor:  There are elements in Israel who argue that the European criticism is tainted by hypocrisy and anti-Semitism.

Levy:  In the course of my four-year tenure as ambassador to the UN International Organizations in Geneva, I was exposed to numerous instances of hypocrisy. The international arena is saturated with hypocrisy and insincerity, which are motivated by cold interests; there is no sense of justice to look for there. Yet, in my opinion, it would be exaggerated to see in the occupation a source of anti-Semitism. The best part of my diplomatic service I did in Europe, and as a rule, I refrained from diagnosing criticism of Israel as stemming from or tainted by anti-Semitism. Rather, I thought that it should be attributed to differences of opinion — sometimes cutting deep, but invariably legitimate — in the dialogue between democracies. It is true that a number of the EU member states seem to examine the Israeli issue minutely, to the point of obsession. However, the hollering against hypocrisy and anti-Semitism is no substitute for a creative policy that may give hope for the future.

Al-Monitor:  Now that the negotiations are already underway, what are the expectations of Europe in general and Prague in particular? What can the European Union do to advance the process? What “carrots” can it offer?

Levy:  Europe wants hope, a shred of a chance for progress in the process between Israel and the Palestinians. Inspired diplomacy — not necessarily concrete gestures — may alleviate pressures and curb undesirable initiatives. Genuine progress would make it possible for Europe to take a firmer line with Tehran, and it may even promote Israel's aspirations to join the EU institutions. True, a consensus of all member states is required to that end, which is nowhere in sight at the moment. All the same, in the 1980s, too, when we struggled to be accepted to institutions such as the Economic Commission for Europe (ECE) and the UN Conference on Disarmament (CD), the move looked unrealistic at the time. Still, 20 years later on, not only were we accepted to the said bodies, but I even served as the acting president of the CD and vice president of the ECE.