The KRG is becoming more, not less, dependent upon Baghdad to finance its social welfare programs through oil rents. 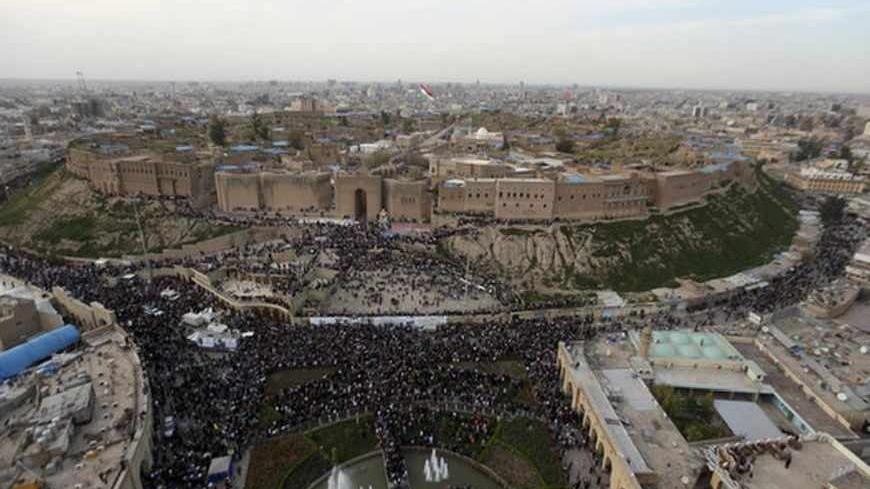 An aerial view of the city of Erbil, the capital of the autonomous Kurdistan Region, about 350 km (217 miles) north of Baghdad, March 19, 2013. - REUTERS/Azad Lashkari

While parts of Iraq and neighboring states have become entrenched in terrorism and political unrest, the Kurdistan Region remains relatively unscathed, reinforcing the northern enclave’s sense of security. Tourism to the Kurdish north peaked during the recent Eid holiday, while border trade and the energy sector has continued to expand. Even the extension of Massoud Barzani’s presidency of the region for another two years without elections failed to elicit a public uprising, despite ongoing criticism from opposition groups and individuals.

Yet underneath the relative calm is a silent revolution emerging on the Kurdish streets, shaped by the region’s rapid and uneven socioeconomic and political changes. This revolution is being conducted through media debates and face-to-face discussions, and in reaction to the rising authoritarianism, absence of financial transparency and increasingly evident gap between the haves and the have-nots in Kurdish society. While these challenges are unlikely to bring about regime change at present, they are raising public awareness and pressures for political reform. Moreover, they coexist with the Kurdistan Regional Government (KRG)'s growing dependency on revenues to co-opt society, posing serious challenges to the internal sovereignty and stability of the region in the medium to long term.

Indeed, opposition voices have been emerging in the Kurdistan Region since the Kurdish civil war in the mid-1990s, either through Islamic parties, nonpartisan individuals, small groupings mainly in Sulaimaniyah province and more recently, the Change (Goran) Movement. Thus far, most have challenged the monopolization of power by the region’s two ruling parties, the Kurdistan Democratic Party (KDP) and the Patriotic Union of Kurdistan (PUK). In their willingness to challenge traditional power structures, these opposition groups also have de-linked Kurdish nationalism from blind loyalty to the Kurdish leadership. It is not uncommon today to hear ardent Kurdish nationalists criticize the KRG as “Baathist” and some of its leaders as “Little Saddams.”

Growing opposition activity — including water-bottle throwing and fistfights in the Iraqi Kurdistan parliament — has not, however, led to regime change. While effectively challenging the status quo and garnering popular support, opposition groups — particularly the Change Movement — have been unable to act as a viable political alternative to the KRG because they cannot penetrate the region’s deeply rooted patronage networks. Without access to significant revenues and charismatic leadership, opposition voices cannot provide what has become increasingly essential for political support and control: provision of public services, salaries and security. During the 2009 provincial council elections, for instance, many youth that criticized the KDP and PUK voted for the Kurdistan Alliance anyway because they needed to “assure their parents’ salaries.”

In fact, since the Sulaimaniyah uprisings against the KRG in 2011, Kurdish leaders have made concerted and successful efforts to co-opt a new layer of society by expanding the KRG’s social-welfare function — sourced by Iraqi oil revenues and the region’s own energy-sector profits. Alongside standard government handouts, the KRG now provides incentives to make life more comfortable for local populations, including cars for youth and villagers, subsidized electricity, free study abroad, land and increased salaries and benefits. Kurdish leaders also have appeased local businessmen by creating opportunities for them to conduct commerce abroad, although through the political parties and not a real private sector. In doing so, they have further entrenched KRG-party patronage networks and control over society and the economy.

While these pacification measures have currently tempered potential challengers, they have created new types of political vulnerabilities for the KRG. By gaining public support through co-optation and coercion and not political legitimacy, and by further centralizing the government, Kurdish leaders have raised local populations’ expectations of what the KRG should provide. Public protests in the region today are about more KRG responsibility, fuel subsidies, inexpensive housing, quality healthcare, environmental standards and other quality-of-life issues. These rising demands coincide with an expansive Kurdish nationalist agenda in Iraq and across borders, reinforcing the KRG’s need for an increasing and continuous revenue flow to support and secure more territories and their populations.

Here lies the new threat to the KRG’s legitimacy and future stability: the inability of Kurdish leaders to financially sustain the growing expectations of local populations continuously and over the long term. Specifically, this includes assuring jobs for the thousands of university students that graduate each year across the region and maintaining the current level of handouts and benefits. Another challenge is reducing the unequal distribution of wealth across society. While a new middle strata has been co-opted, poorer groups and those disconnected from the parties have lost out economically, which is breeding further resentment from below. Some local populations have described KRG measures as “feeding the volcano,” which has deepened dependency, expectations and a sense of exclusion that could lead to social implosion should the funding source decrease or disappear.

These trends also have implications for the KRG’s autonomy and nationalist agenda. Given the vital role of revenues and services in assuring domestic stability, the KRG has become more dependent upon Baghdad to finance its social-welfare function through oil rents. Turning to Turkey as an alternative energy-funding source may sound like a viable option, but the KRG would still have to assure a minimal level of revenues that can sustain the region’s demands over the long term. Either way, in lieu of real democratic reforms and a free-market economy, the landlocked, energy-rich Kurdistan Region will be hard pressed to secure oil rents. This will require political trade-offs that could likely lead to new tensions between Kurdish nationalist expectations and the region’s economic needs.