How Will Hezbollah Respond To a Western Strike on Syria?

As the world awaits an expected Western military strike on Syria, Hezbollah's reaction will depend on the details of this possible strike and is based on regional concerns. 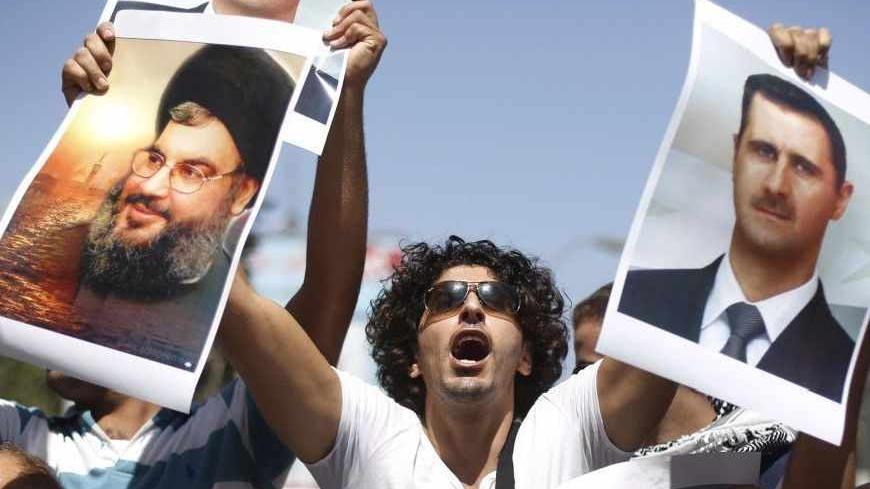 A Palestinian protester holds pictures of Syria's President Bashar al-Assad (R) and Hezbollah leader Sayyed Hassan Nasrallah during a demonstration against potential strikes on the Syrian government, in the West Bank City of Ramallah, Aug. 31, 2013.

About three months ago, Hezbollah Secretary-General Hassan Nasrallah decided to send his elite military units to Syria to support the military efforts of the regime of President Bashar al-Assad in facing opposition forces. Deputy Russian Foreign Minister Mikhail Bogdanov reported that Nasrallah had told him, when he met with him on April 27 during a visit to Lebanon, "I intervened in Syria to save the regime, which was on the verge of collapse."

Hezbollah's participation in the battle of Qusair — which, according to sources here in Beirut, included approximately 3,000 fighters — led to a change in the balance of the military conflict in Syria in favor of the regime.

According to a Hezbollah source speaking with Al-Monitor on condition of anonymity, it was assumed that, according to the plan, the regime would continue its cooperation with Hezbollah to gain control of the outskirts of Damascus, via a battle in eastern and western Ghouta, as well as through beginning another battle in the Qalamoun region. The latter is adjacent to the Lebanese border facing the western Bekaa valley, and is characterized by rugged terrain. It was also assumed that these two battles would be followed by a battle for Aleppo, which is seen as a battle that would, to a large extent, decide the overall internal Syrian conflict. However, this plan, by which the Syrian army — along with strong operational military support from Hezbollah — would take the reins of the military battle, stopped the day after the US declared that it was prepared for a military strike against the regime against the backdrop of Western accusations that it had used chemical weapons in the Damascus countryside.

Within Hezbollah, this development is seen as a very dangerous turning point affecting all paths of the Syrian crisis from its outbreak until now. The same source said that the international dimension of the Syrian crisis has entered a new phase. Its role is transforming into direct intervention in the events, whereas it previously involved indirect action through providing arms and intelligence to the Syrian opposition. But that same source said that the expected Western military strike will bring the whole region into the conflict and will result in the collapse of red lines. For US President Barack Obama isn't the only one in the region who has red lines. The Supreme Leader of the Islamic Revolution Ayatollah Ali Khamenei also has red lines, most importantly preventing the fall of the regime in Syria and protecting the Islamic resistance in Lebanon.

The Hezbollah source believes that, at this moment, the region is heading toward a conflict between Obama's red line and Khamenei's opposing one. It is worth recalling here that an official in the Iranian Revolutionary Guards, an institution characterized as the strongest and most ideological in Iran, threatened that if Syrian comes under attack from the West, the fire would reach Israel.

Sources close to Hezbollah clarified to Al-Monitor that the party, in the event of an American attack, would likely act according to one of the following scenarios:

1. At a minimum, Hezbollah would help to protect cities in areas where the regime has regained control, to prevent any attempt by the opposition to take advantage of the results of the US strike to make progress on the ground in Syria.

2. The next, middle-range option would be for Hezbollah to resort to directing a security message at Washington, through carrying out special security operations. The nature of such operations cannot be predicted at this time, because they would be intended as surprises in the war. The party, however, would only resort to this option when Hezbollah, and first and foremost Iran, were certain that the American strikes were not limited in time and aimed at providing military cover for the opposition's movement on the ground.

3. Finally, at the extreme end, Hezbollah would bomb Israel if it became clear to Tehran that Washington was military engaged in a battle to bring down the regime.

One can confidently predict that the Syrian regime will not be alone in facing any Western strike, or even an American invasion, in the event that things developed for the worst. During the last year of conflict in Syria, the forces defending the regime have not been limited to the Syrian Arab Army, but rather standing beside it — and sometimes in front — were tens of thousands of fighters from Lebanese Hezbollah, Iraqi Hezbollah and the Iranian Revolutionary Guard. As the conflict shifts from a battle within Syria to a war with American and Iran, these [foreign groups] will take the opportunity to demonstrate that their cause is justified, and that the accusations that they are fighting with the regime against the will of the Syrian people are incorrect. This battle will emphasize that they are fighting on the correct front, which is legitimate and consistent with their doctrine that is hostile to America and Israel and their ambitions in the controlling the region.

No observer can imagine that the start of a US war on Syria would not have repercussions on neighboring countries, particularly Lebanon and Israel. Hezbollah is no long a party that is merely affected by the development of events in Syria. Rather, following its announcement that it was involved in the fighting there, it became a concerned party, and assumed responsibilities for the management of the country's conflict equivalent to those assumed by the Assad regime itself.

There is information that the party, during recent hours, has raised its level of mobilization and alert among all units, whether those in Syria or in Lebanon. The party is preparing itself to fight on two fronts at once, in both Syria and Lebanon.

At the heart of this fight, which is expected to erupt within the next few days, will be the prominent role played by the possession of rockets. This comes as part of the embodiment of the Iranian threat, which warned that any Western strike on Syria would lead to igniting the fire in Israel. In a statement made on Aug. 27, Iranian Defense Minister Hussein Dehghan said, "A strike on Syria would threaten the security and stability of the region." Moreover, the Iranian Foreign Ministry warned that using military means against Syria would have severe repercussions on the entire region.

In light of the current circumstances, Hezbollah is in a very complicated position. On the one hand, it is facing an internal attack from numerous Lebanese political forces that accuse the party of being responsible for dragging the security repercussions of the Syrian crisis into the Lebanese interior. On the other hand, it faces an intense regional political and media attack from the Arab Gulf States, which accuse it of working for Iran, against the interests of the Lebanese people and against the will of the Syrian people wishing to overthrow the Assad regime. From another, fundamental angle, Hezbollah is finding that it may now be forced to fight on two fronts at the same time: against a broad military coalition of NATO countries — led by the US — and against Israel. The arena for such a conflict would stretch from Syria to Lebanon, from the Syrian-Turkish border all the way to Lebanon's border with Israel.

This means that the party must spread its forces — which comprise more than a hundred thousand fighters supported by missile systems, including ground-to-ground missiles, ground-to-sea missiles and perhaps ground-to-air missiles, using the type that are carried on one's shoulders — throughout this entire area that could ignite following an expected Western strike on Syria.

There are military experts in Lebanon who expect that, in the event such a war began, it is likely that Hezbollah would demonstrate surprising military capabilities, such as those demonstrated in the 2006 war. In particular, a Hezbollah land-to-sea missile hit an Israel battleship that was bombarding Beirut from off the Lebanese coast. Moreover, Hezbollah used Russian anti-tank Kornet missiles to stop Israeli tank attacks in al-Khayyam, which resulted in heavy losses.

Hezbollah sources revealed to Al-Monitor that the party prefers, as a result of the strategic developments witnessed in the Near East following the Syrian events, to be a partner in a regional and international war, instead of fighting a war with Israel by itself. In the latter case, it would be forced to fight with only weak logistical support from Syria, given Damascus' preoccupation with its own internal problems. Yet, in the case of a regional war, it would be part of a broad front along with Syria, and would receive the same support that the Assad regime is receiving from Iran and Russia.

These same sources revealed that Hezbollah is now realizing that its decision to fight in Syria was correct. Had it continued to follow a disassociation policy regarding what was happening there until this point, this would have led to a catastrophe when when the US announced that it is coming to the region with its allies to strike Hezbollah's strategic partner. These sources concluded by saying that the most dangerous thing that could have happened would have been for the Iranian axis in the Near East to allow America to isolate its parties. Now, however, the parties of this axis stand over a unified field. A response to "US aggression" will not occur only on Syria territory, but on a front stretching from Syria's border with Turkey all the way to Lebanon's border with Israel.