Following the Egyptian army’s ouster of former President Mohammed Morsi, Yemeni political forces are divided in their views and alliances. 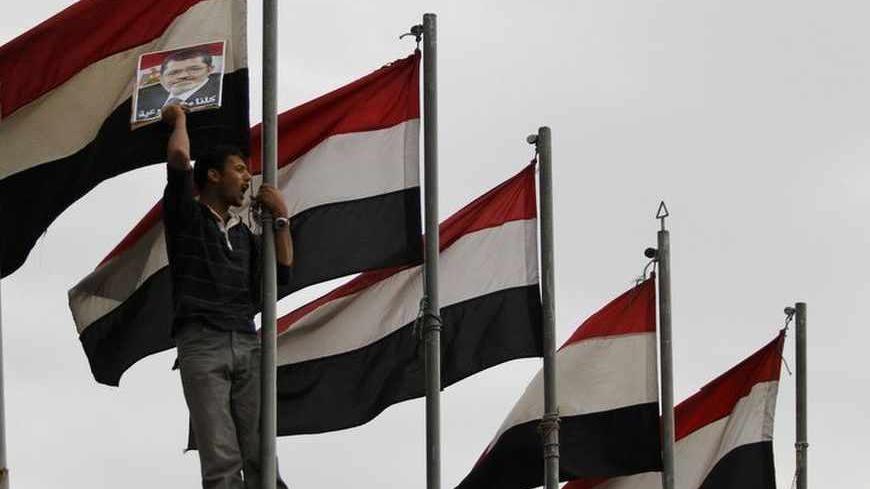 Yemenis are repeatedly mentioning the old saying: “Egypt’s present is Yemen’s future.” This statement proved true at the beginning of last century when Yemen established a monarchy after the rise of King Fuad in Egypt. Furthermore, Yemen adopted a national, military regime after Egypt's late President Gamal Abdel Nasser took power. Then, when former President Hosni Mubarak assumed power, Yemen formed a regime affiliated with the West. Most recently, the Yemeni revolution flared up in 2011, days after the Egyptian one erupted. For a long time, Yemen has been molded by the Egyptian model to the extent that some curricula in Yemeni public schools were reproduced from Egyptian ones.

Lately, the Egyptian crisis has rippled into Yemen, and has been addressed by the official rhetoric of the elite, public, activists and partisans. The discussion can be heard everywhere — cabs, buses and nightly Ramadan gatherings. Seculars and liberals gloated over the Muslim Brotherhood’s loss, provoking responses from Yemen's Brotherhood. Yemen's own issues — regardless of how delicate they may be — were rarely discussed in comparison with Egypt's. This was further highlighted when Sanaa barely spoke of an important event commemorated by the South Yemen Movement, the July 7 anniversary of the 1994 civil war against the south. Usually this event attracts media attention, but this time, Egypt stole the limelight.

On the night of July 3, after the Egyptian army ousted former President Mohammed Morsi and assigned Adly Mansour in his place, demonstrators — including women — took to the streets of Sanaa at midnight in support of the decisions made by army commander Abdel Fattah al-Sisi. At this time of the night and in such conservative society, passersby are typically nowhere to be seen in the streets of Sanaa, let alone women. The demonstration took place in the same square that embraced the demonstrations of the Yemeni youth calling for the toppling of former President Ali Abdullah Saleh in 2011.

Paradoxically, thousands of demonstrators took to the streets of Sanaa on the afternoon of July 8 in support of Morsi’s legitimacy. They frowned upon what they called a military coup, and the army’s crackdown on Morsi supporters in front of the Egyptian Republican Guard headquarters. The paradox resides in the symbolism of the location: Tahrir Square in Sanaa, the same location that hosted the upheaval of revolutionary powers — the Yemeni Congregation for Reform and, notably, the Muslim Brotherhood — against Saleh. Earlier, scores of Islamic activists headed to the Egyptian Embassy in protest of Morsi’s deposition.

The stances of Yemeni political powers

The division of the Yemeni public over Egypt is an extension of Yemenis' affiliations with the various stances of the political powers. The discussions have escalated to verbal attacks and those who hold different opinions are fanatically judged. This is what happened in regard to the Syrian crisis. It seems that the Yemenis are directly involved in all events of the region and they express it with zeal, even though the Yemeni powers are differently positioned on Egypt and Syria.

For more than a decade since its establishment, the Joint Meeting Parties bloc has adopted homogeneous stances on local and regional developments based on the convictions of its members that unity between allies is unshakable. Yet, the fierce support for Morsi among the bloc's largest component, the Yemeni Congregation for Reform, alongside the Nasserite Unionist People's Organization's support for the army, has impacted the relationship between both parties and reflected on their popular bases.

Speaking about the Egyptian developments and writing in religious rhetoric, the head of the Yemeni Congregation for Reform posted the following remarks on his Facebook page:

“And it may be that you dislike something, yet God brings through it a great deal of good. God Almighty has spoken the truth."

“I remind everyone that the Turkish army tried to be a stumbling block for the Islamic expansion for years and did not succeed."

“Here is the Egyptian army, which has been trying to repeat the same scenario for decades. God willing it will not succeed, because Islam is coming. … Islam is coming because the facts prove so."

“God refuses for his light not to prevail, no worries or despair, God is the master of His affairs, but most people do not know. God is great.”

It is normal for former President Saleh's party, the General People’s Congress party, to vigorously support the decisions of Sisi in order to disturb the Muslim Brotherhood in Yemen, since the latter were leaders of the upheaval against Saleh in 2011. For his part, Saleh also showed support for the army’s decisions.

The stance of the president

The Yemeni Congregation for Reform supported Morsi since he is part of the global Brotherhood organization. Weeks earlier, Morsi met with Hamid al-Ahmar, a leading member of the Yemeni Congregation. Ahmar later relayed his impressions about Morsi’s ouster to Al-Monitor, saying, "What happened in Egypt was an overturn of democracy. With sincere hearts, we should ask God to help Morsi."

A change of stances

The Houthi armed group known as Ansar Allah — which has traditionally opposed the Muslim Brotherhood — supported the Egyptian army against the Brotherhood. The rivalry between the two stemmed from disparate ideologies and the repercussions of the Houthi battles with the state from 2004 to 2010, during which the Brotherhood took sides with Mohsen Kaed, the leader of the six rounds against the Houthis in Saada. This is the first weighty stance that the Houthi movement has espoused that is not on the same page with Iran, which is accused of coordinating and funding the Houthis.

Historically, Egypt was the first to support the two revolutions in Yemen — the first against the rule of Imams in 1962, and the second against British occupation in south Yemen in 1963. Saudi Arabia was also the first to oppose both revolutions, as did the Brotherhood. Even those who took part in the revolution opposed the Egyptian presence in Yemen, despite the fact that Egypt was the revolution's main supporter. Additionally, Saudi Arabia used the Egyptian presence as a pretext to support the rule of the Imams against the revolution. The alliance between Yemeni religious powers and Saudi lived on, as previously mentioned.

On the other hand, al-Fadil al-Urtilani, the envoy sent by Hassan al-Banna, the Muslim Brotherhood's founder, was the mastermind of the failed 1948 revolution in Yemen. Ever since, the bond between both countries and organizations has been ongoing and the division the Yemeni scene is witnessing as a result the division in Egypt will not be a last indicator of this bond.

Despite all the signs that Yemenis were identifying with Egypt — to the extent that a Tamarod movement was established in the city of Ibb  — the repercussions of the Egyptian crisis on Yemen cannot be predicted. It is possible that some local powers will blackmail the Yemeni president. It is also probable that the president will be more powerful when dealing with Islamic powers and will undermine their influence after the loss inflicted on their stronghold in Cairo.

In general, the situations of Yemen's military and judiciary systems are not the same as Egypt's. They both have clear dysfunctions when it comes to loyalty and administration. The army was divided between supporters and opponents of the Saleh regime in 2011, and reunification is yet to be implemented. Therefore, it was hard to foretell a similar move for the army in Yemen.

The judiciary system is closer to this view since it is an extension of the executive power in Yemen in regard to its ability to assign and depose. The judiciary system, however, does not enjoy enough power to intervene in public affairs, not even to simply orient the course of action.

The success of the Yemeni experience shines bright and the praise of the international community increases as Yemen is seen as a successful experience among the Arab Spring countries, amid the deterioration of the situation in Egypt and Syria, even though the experience was not effective if seen through the lens of Yemenis.