The family whose home Rachel Corrie tried to defend a decade ago continues to commemorate her tragic death. 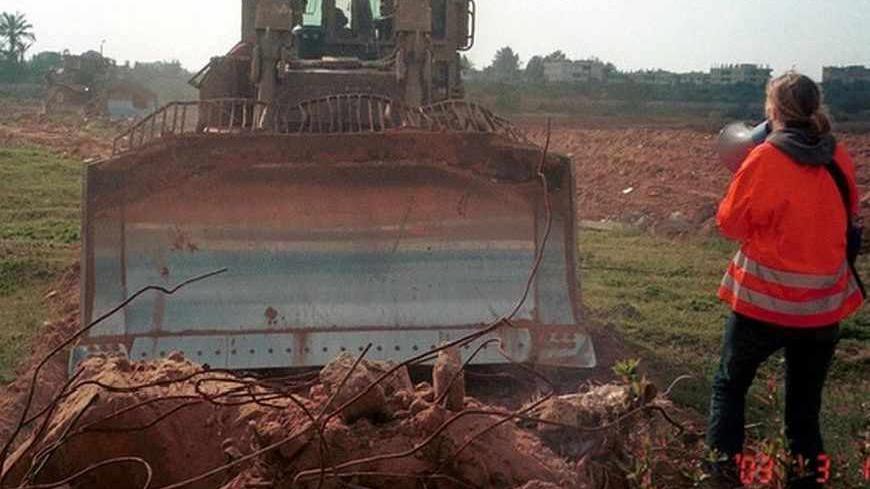 US citizen Rachel Corrie, 23, speaks through a megaphone to an Israeli army bulldozer before she was killed in Rafah, southern Gaza Strip, March 16, 2003. - REUTERS

On March 16, 2013, the tenth anniversary of American peace activist Rachel Corrie’s death was marked by no grand commemoration ceremonies. The Nasrallah family, however, as they do every year, went to where their demolished house once stood to place flowers at the scene of her murder. Even though the neighborhood has changed and the tunnel area at the Egypt and Gaza borders has been completely transformed, the Nasrallahs cannot forget.

Al-Monitor met with the Nasrallahs in their small and humble rented house. They shared their memories from that year, as clearly as if it all happened yesterday and not a decade ago.

Samir Nasrallah talked of how members from the International Solidarity Movement were staying with the family to protect them and prevent Israeli bulldozers from storming the neighborhood and demolishing their house. At the time, one of the family friends mentioned Corrie to Samir and informed him that she was willing to stay to support them. So they hosted her.

Samir’s wife, Itimad, told Al-Monitor, “Rachel stayed with us for two weeks prior to her death. She spent the majority of the time with me, since my husband was at work and my children were at school. We stayed at home, watching the bulldozers nearby through small holes in the sheets covering the window. She often insisted on helping me prepare food.”

Their daughter Iman, who is not yet 16, remembers those days, especially Corrie's attempts to learn a few Arabic words. Imam talked of Corrie with a warm smile, “She was really kind. She played with me and the bunnies, which I kept with me. I remember how she died. My father was watching her standing in front of the bulldozer through a hole in the fence. Suddenly he yelled at the top of his lungs that the bulldozer crushed Rachel. He ran to her and then came back to get white cotton.”

“The bulldozer crushed her even though she was wearing neon-colored clothing, standing at eye level with the driver and speaking English,” Iman added. “We all cried. The house was filled with neighbors, press and the members of the solidarity movement. I remember a photo of me holding a bunny spreading over the media.”

During her stay with the Nasrallahs, Rachel wrote to her mother. One of the letters, dated Feb. 27, 2003, reads: “I love you. I really miss you. I have bad nightmares about tanks and bulldozers outside our house and you and me inside. Sometimes the adrenaline acts as an anesthetic for weeks and then in the evening or at night it just hits me again — a little bit of the reality of the situation. I am really scared for the people here. Yesterday, I watched a father lead his two tiny children, holding his hands, out into the sight of tanks, a sniper tower, bulldozers and Jeeps.”

Samir remembered a moment when the bulldozer, intent on demolishing the house, was only 40 meters away. Rachel stood with her fellow activists to halt the demolition. She spoke with the driver in English using a megaphone, saying that the house was safe and that it sheltered harmless children.

Nasrallah said, “I was watching what was happening through a hole in the house’s wall. I remember that the driver pulled out the soil from under Rachel's feet, which made her lose balance, and then, when she fell, he ran over her.” Nasrallah recalls how he ran to her with her activist friends, who collapsed at the sight. They then took the photos that were later spread widely.

Samir affirmed that Corrie died at the hospital due to fractures in her spinal column, internal bleeding and a severe injury to her face. She was surrounded by doctors and journalists, yet she could not be saved.

Itimad said Rachel has left a memory that ignites a hopeless anger in their hearts. She noted how the Israeli bulldozers made haste to come back to their house and demolish it shortly after the incident. They had no one to protect them at those hard, fearful moments, especially when the Israeli army threatened to use their son Kareem as a human shield. Their minds teem with memories of Rachel and her heroic act.

According to a report issued by the Palestinian Center for Human Rights, 319 houses were demolished in Rafah, on the Egyptian border, from the beginning of July 2002 until the end of March 2003. If you include the period since the beginning of the second intifada in 2004, that figure increases to 1,059 houses.

Kareem vividly remembers that day in all its painful details, telling Al-Monitor, “The bulldozer ran over Rachel.” Kareem was 14 at the time. He ran to call an ambulance and explained to the paramedic that a foreigner was crushed by an Israeli bulldozer. The dispatcher hung up, thinking he was pulling a prank. Khaled, Kareem’s uncle, had to call them again confirming Kareem's story. Corrie was transported to Youssef al-Najjar hospital in Rafah, where she passed away.

Reem, the second daughter, was 12 when it happened. She recounted how the family went with Rachel’s parents and friends on the first anniversary of her death to the place where she died and placed flowers. The Nasrallahs have continued to do so ever since, even though the whole area looks completely different.

In 2005, Rachel’s family filed a suit against the Israeli army at the central court of Haifa. Yet the court acquitted the Israeli army on Aug. 28, 2012, and refused to press murder charges. According to media sources, the military court conducted an investigation in 2005 and came to the conclusion that Corrie was killed due to an unintentional accident since “the bulldozer driver could not see her. Her killing was unintentional since Rachel put herself at risk.”

Samir described his shock when he heard the decision. Rachel had been moving around in front of the driver wearing neon-colored clothing and talking to him through a megaphone.

“How is it possible that he didn’t see her?” Samir reiterated the importance of not letting the case fall through the cracks, saying the US State Department and the whole world should seek justice for Rachel, who worked her whole life to bring justice to the oppressed.

“Rachel stayed with us for a short while to protect our house. Yet, through her death, she remained with us forever and her memory will be held dear every second of every minute,” he said.

Speaking about the low number of ceremonies marking the tenth anniversary of Corrie’s death, Khalil Abu Shammala, head of the Al Dameer Association for Human Rights, told Al-Monitor that on the public level, the anniversary was not ignored. Many foundations named their halls and libraries after her and kept thousands of her photos. The problem lies in the political situation: The political leadership is drawing away from taking part in such events due to divisions. Many believe that is why her case is no longer promoted as it should be.

Shammala added, “Legally, I believe her case should be continuously followed so as to achieve justice and hold the perpetrator of the crime accountable. The problem is not the law or its tools but rather a lack of will, most notably on the part of the American administration, to hold Israel accountable for its crimes.”

In the letter to her mother, Rachel continued, “I just feel sick to my stomach from being doted on all the time, very sweetly, by these people who are facing doom. I know that from the US it all sounds like hyperbole. It really hurts me, again, like it has hurt me in the past, to witness how awful we can allow the world to be. This is not at all what I asked for when I came into this world. This is not at all what the people here asked for when they came into this world. This is not the world you and Dad wanted me to come into when you decided to have me. This is not what I meant when I looked at Capital Lake and said: 'This is the wide world and I’m coming to it.'”