While the Lebanese government is preoccupied with domestic and regional conflicts, efforts to combat the country’s growing cannabis trade are put on the back burner. 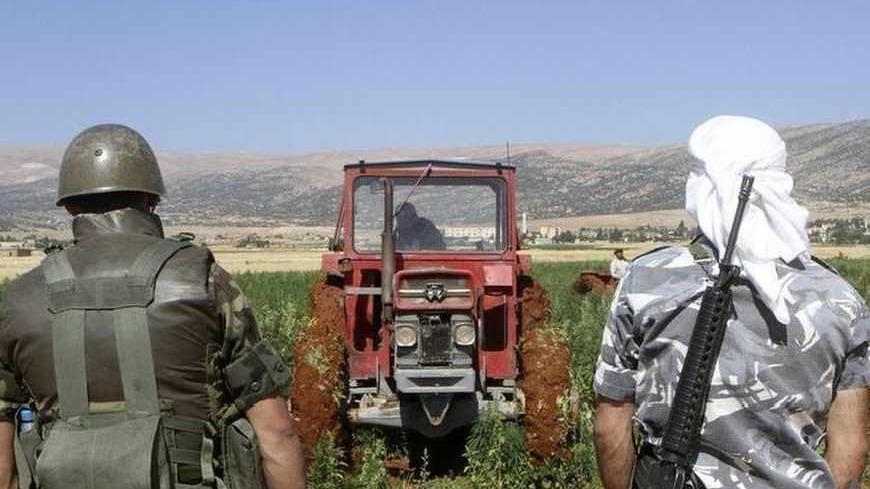 A soldier and a policeman secure a field as a man uses a tractor to uproot hashish plants in Boday village, near Baalbek, Lebanon, July 23, 2012. - REUTERS/ Ahmed Shalha

In Lebanon, the absence of the state is reflected in many ways, and cannabis cultivation is the most absurd and scandalous of them all. It is alarming, yet ridiculous. Each year, with the beginning of summer, the Lebanese state, without fail, demonstrates the inefficiency and corruption of its institutions. This summer is no exception. In the distant plains were the cannabis crops are thriving, a familiar farce is set to play out once more.

Cannabis has been a “prohibited crop” since the 1930s. With the establishment of the Lebanese state centered around the capital, Beirut, “remote and deprived areas” emerged independently. The regions of the northern Bekaa were designated as such for a number of reasons.

First is their distance from Beirut. One must, however, keep in mind that it is a relative "distance," no more than a hundred kilometers, as Lebanon is small. Second, the areas in the northern Bekaa share a border with Syria, which contributes to cross-border smuggling activities. Syrian and Lebanese security measures have been lax in this region, just as in other border areas. Third, these areas are characterized by a rugged, barren landscape, rising from 1,500 meters to more than 2,000 meters above sea level. There are few water resources, making agriculture a challenge. Fourth, the region is home to traditional tribes who live according to their own familial and social norms, like generations before them, and have a healthy respect for power and weapons.

The Lebanese know that somewhere in the northern Bekaa there are “cannabis enclaves” whose residents have engaged in clashes with the Lebanese state since independence, in 1943. With the outbreak of the civil war in 1975 and the complete absence of the central state, the enclaves cultivation of prohibited crops enlarged their territory and expanded production to include opium, narcotic pills and cannabis indica, turning Lebanon into a hotbed of illicit crops.

After the war ended in 1990, the situation changed, with the deployment of the Syrian army all over Lebanon, particularly the Bekaa. In 1992, the Lebanese army alongside Syrian forces began launching annual campaigns to destroy prohibited crops. At the time, many Lebanese claimed that the new policy had been imposed by Syrian authorities to improve the image of their hegemony over Beirut and in compliance with an agreement made with Western states and international institutions involved in the fight against drugs. It was alleged that the Syrians were charged with preventing these products from entering the West in return for large sums of money.

The Syrian army withdrew from Lebanon in 2005, following the Cedar Revolution. The Lebanese state returned weakened to the cannabis enclaves, which were able to gradually regain their power. Once again, the government began launching annual campaigns during July and August to wipe out the cannabis crops. Each year the action lead to armed clashes between the Lebanese army and armed groups in the enclaves. The clashes, however, are no longer limited to light weapons, but also included medium-grade weapons, rocket-propelled grenades and even small mortars used by farmer militias.

In 2012, the situation worsened, offering proof of the state’s weakness and the enclaves’ growing strength. In August that year, the authorities announced a “schedule” to destroy the illicit crops. The state would hire between 60 and 100 tractors and have their owners wipe out the crops under the protection of the army and internal security forces.

As soon as the decision to destroy the crops was issued, the “wise and elderly” in the northern Bekaa issued a statement warning tractor owners not to cooperate with the authorities or suffer the consequences.

The confrontations began on August 4. Three members affiliated with the official security forces were wounded, and a number of tractors were damaged on the first day. The Lebanese government therefore decided to try to use a force greater than the Lebanese army to crack down on farmers in the town of Yammouneh. Hundreds of farmer militias gathered in the area and prepared for the confrontation, which portended a massacre. At this point, the government backed down, setting the stage for a surreal scene never before witnessed in Lebanon.

On August 6, cannabis farmers, newly empowered, staged a sit-in at Yammouneh, cutting off the highway and demanding the right to cultivate cannabis or financial compensation from the government in exchange for permitting the destruction of their crops. The protest soon turned into something of a parade, as a few politicians acknowledged their “understanding” of the protesters’ demands. A famous local singer joined the protest, which became a gathering for supporters and curious observers.

On the third day, Interior Minister Marwan Charbel showed up unexpectedly to discuss the matter with the protesters. The tribes greeted Charbel with traditional welcoming rituals, and the negotiations soon ended, with the farmers being promised government credits as compensation for their destroyed crops. Weeks later, the government approved the credits — long after the crops had been harvested, processed and sent to markets in Lebanon and abroad. Accusations of corruption were hurled at the involved officials and security forces.

This year brings a new harvest and a new farce. The only obvious difference is that the power of the state has gotten even weaker, whereas that of the farmers has greatly increased. Indeed, the interior minister did not need to trouble himself with going all the way to the northern Bekaa for negotiations with people allegedly “wanted by the Lebanese judiciary.” Instead, soon after the security forces announced that this year’s destruction of crops would begin on July 15, the farmers requested a meeting with the minister in his office in Beirut. An official delegation arrived on July 12, finding reassurances in the minister’s office. The delegation laid out its perspective and clung to its terms and positions, backed by the strongest weapon of all — the weakness of the state.

It is rumored that a consensus was reached to postpone the eradication campaigns, which suggests that growing and smuggling cannabis is essentially allowed, as it is every year. According to informed sources, areas cultivated with cannabis were estimated this year at around 50,000 dunams (5,000 square meters) and at around 1,000 dunams in the regions of Hermel-Baalbek and north Lebanon, respectively. The price of 1.2 kilograms of cannabis indica on the local market is $1,200.

When the delegation of farmers left the Ministry of Interior, security forces had set up a checkpoint, stopping cars and issuing tickets to people not wearing seat belts or found to be in possession of one gram of cannabis, subjecting them to immediate arrest, trial and imprisonment.