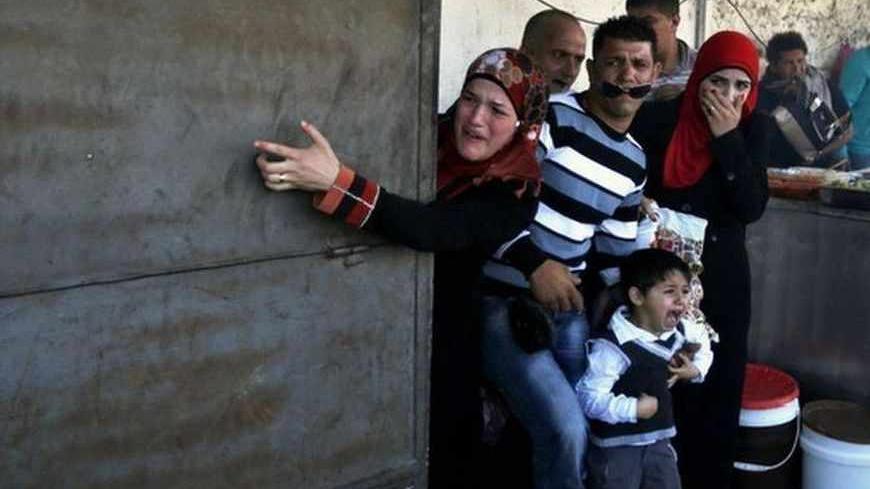 Palestinians react as a stun grenade was thrown toward them during clashes between Israeli security forces and Palestinian protesters during a demonstration for Nakba (Catastrophe) Day near Damascus Gate at Jerusalem's old city, May 15, 2013.

Israeli’s Arab citizens watch the revolution in Egypt and come away confused. On one hand, this is a popular revolution with a very distinct social dimension, which should be admired. On the other hand, it is sending shockwaves throughout the Arab world, leaving Israel an oasis of stability in the region.

“I’ve been watching Egypt. I always used to visit there. I felt at home there once, but now I don’t recognize it,” said Abu Azmi, a restaurant owner from Tur’an who provides catering services for events across the country, most of them held by Jews. “I think that if I had my business in Egypt,” he adds, “it would have fallen apart by now.”

I ask him whether everything happening in the countries surrounding us has changed his attitude toward the State of Israel and its government.

“The state still discriminates against us because we’re Arabs, and that’s wrong,” he answers. “Our children feel that they have no future here, even if they study hard and receive a degree in engineering or economics. We remain second-class citizens in just about everything. On the other hand, take a look at Egypt. What kind of future do the young people have there? They dreamed of democracy and got [deposed President Mohammed] Morsi instead. Now the military is in power, so can we even complain?”

This feeling is not unique to Abu Azmi. Israel’s Arab citizens have gotten used to being taunted with questions like: “Did you have it any better in the Arab states?”

Since they have never been treated as equal citizens or as an integral part of the State of Israel, whenever the Arab sector expresses dissatisfaction with the discrimination it faces, whenever it demands equal rights or criticizes Israel’s policies and leadership, it faces the wrath of the Jewish population, which claims that since the situation was far worse in the Arab states, they had nothing to complain about. They are told, “If it’s so bad here, why don’t you go make a better future for yourselves somewhere else? Let’s see you do that.”

The absence of a stable government in Egypt and the intolerable economic situation only strengthens these arguments, making matters even more difficult for Israeli Arabs.

“I’m 21 years old. My Jewish friends in college start school when they are 24 or 25. They were in the army, and then they worked a year. They saved up some money and traveled overseas for a breather,” says Muhammad Abu Jiab, a law student whose father I’ve known for years.

“They’re always telling me how lucky I am to be an Arab, how I didn’t serve in the army, and how I started school before them, so that I’ll have my degree by the time I’m 22. Why would I complain about discrimination? After all, my father has money to pay my tuition. I’ll have a degree and start making a living at a relatively young age.”

“We had a make-up class on the day that the Egyptian army issued its ultimatum to Morsi. I was approached by one of my classmates, someone with whom I usually have a good relationship, but on that particular day he said to me, ‘You see that? If you were in Egypt, instead of being in school here, you’d be in Tahrir Square. If your sister went to demonstrate there, she’d be in danger of getting raped. Is that the kind of life you want?’ I didn’t know what to say to him. On one hand, all that racism disgusted me. I suddenly found out what he really thinks about me. But on the other hand, he was right. Go tell someone in Egypt that college tuition here is more than 30,000 shekels [$8,000] per year. There are people there who won’t earn that much money in their entire lives.”

Why didn’t you explain to him that you’re an Israeli citizen just like he is, so whatever happens in Egypt affects you exactly the same as it affects him, I asked.

Even the Arab political parties are in no rush to comment on what is happening in Egypt. On many occasions, Arab Knesset members have expressed solidarity with what was happening in Gaza and the West Bank and issued statements about events there, but in the case of Egypt, those same Arab Knesset members just watch from the sidelines. No one issues any condemnation, but no one sends their congratulations, either. Those very same Knesset members who have something to say about practically everything else, including the situation in Syria, are all silent. They will not express any position on what is happening there.

Instability in the Arab world in general and Egypt in particular has created a situation in which Israel, despite all its flaws and discriminatory attitudes, has become a place where it is possible to grow, create and earn a living with dignity. It is a place where there is order, a place where there is justice and an ultimate judge. It is a place that confounds the Israeli Arab public and leaves it speechless. They are left waiting anxiously for what will come next, more than anyone else, more than anywhere else.