Israelis no longer flock to the streets, yet the social protest is far from over and can still bring about political transformation. 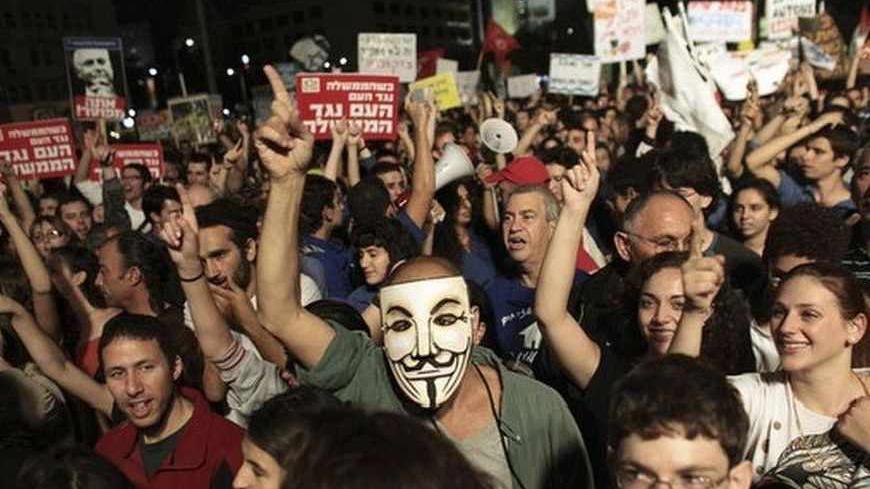 Protesters take part in a rally calling for social justice and a lower cost of living in Rabin square in Tel Aviv, Oct. 29, 2011. - REUTERS/Daniel Bar On

Two years after Israel’s social protests, also known as the tent protest, the past weekend's anniversary events did not produce tens of thousands of people taking to the streets. Yet contrary to what politicians would like to think, it would be a great mistake to assume that this heralds the failure or demise of the social protest. Quite the contrary: Although the protest may have taken on a new shape, it is nevertheless alive and kicking, ever-present across society and in the consciousness of the Israeli public.

Having shown no confidence in Prime Minister Benjamin Netanyahu during the last elections, the Israeli public believed that young stars Finance Minister Yair Lapid and Economy and Trade Minister Naftali Bennett would introduce the necessary changes in the economy and society. But by now, the people have come to the realization that not only has their economic situation not changed since the elections, it has essentially taken a turn for the worse. Yet the fact that only a couple of thousand people rallied on Saturday night [July 13] does not mean that the public has given up hope following its disappointment with the politicians. By and large, Israelis are not disheartened. Perhaps better than ever before, they appreciate the power they hold in their hands, still believing they can alter their fate and future.

The Israeli public will no longer accept hollow slogans from politicians who embrace the politically correct socio-economic jargon. It can tell at a glance when this is a sham and charade by reform impostors.

Day in, day out the public feels the decline in buying power as it hits its wallet. It pays more for gasoline and electricity. The dream of homeownership is getting farther and farther away. And yet it still believes in its right to change and social justice.

Until two years ago, most citizens never faced the country’s housing crisis and could not understand the implications of a handful of tycoons taking over the Israeli economy. Now, the very same public demonstrates knowledge and involvement in the economic ramifications of the natural gas in the Mediterranean and the decision to export part of it. It insists on enjoying the revenues from the gas, citing the just argument that this is a natural resource belonging to the state. It ultimately forced politicians to put a cap on export quotas. Before the protest, this wouldn’t have happened. The public would not have noticed that the gas was being expropriated and politicians would not have taken the public’s opinion into consideration.

Another major impact of the protest on Israeli society is the return of unionized labor. The workers in the labor market, especially in the private sector, have recently established a record number of labor unions to the displeasure of the big employers. This is another indication that while Israelis may not take to the street to stage rallies every other day, that they have certainly learned to insist on their rights and direct politicians when the need arises. This is an indication that the spirit of the protest still blows, maybe not through the streets, but certainly everywhere else.

It would be a mistake to look at the protest as a single event that started in the summer of 2011 and ended with the recent elections. It should be regarded as a long change in awareness that will continue to impact Israeli politics and enthrone or dethrone leaders. The nature of formative events — and the social protest certainly falls within that category — is to have a long-term effect on the system. The full-blown impact might become evident only after a few years.

A fitting example would be the 1973 Yom Kippur War blunder. Two years after that war ended, general elections were held. Despite the decline in power of the Alignment party (today's Labor) and its leadership’s failure, Golda Meir was re-elected as prime minister. The major political shift was complete four years later in 1977 when the Likud party rose to power, scandalously defeating the Alignment party and sending it to occupy the benches of the opposition.

The Israeli public needed time to internalize the extent of the blunder of that war, finally settling the score with the people it held accountable and replacing the country’s leadership. In the case of the 2011 protest, the elections took place a year and a half after the formative events, giving rise to young, new forces that were identified as the economic alternative to a government that was oblivious to the burnout of the middle class (and the same process would appear to take place in the imminent municipal elections slated for October).

It is possible that if Netanyahu had faced a rival considered just as experienced and having high leadership skills, we would have seen a change of government. The prime minister was spared defeat since none of the other contenders was believed to have the skills to replace him as head of state. Nonetheless, the results of the elections forced Netanyahu to form a new government with Yair Lapid and Naftali Bennett, who prior to the elections were regarded as heroes of the middle class and now hold prominent economic roles.

At this juncture, the Israeli public is disappointed in the two of them — particularly Lapid, who gained the most from the social protest and from whom expectations were high. The government has not been replaced, the economic situation has deteriorated and the Lapid-Bennett duo has become part of the problem system that the public wanted to see changed.

The next elections may be far off, but unless the government improves the economic and social standing of its citizens, a major political shift in the spirit of the social protest remains possible. This will depend, of course, on the political alternatives and the security situation. However, a candidate seen as showing solidarity with the principles of the protest and having the skills to be prime minister would be able in a few years’ time to ride on the coattails of the 2011 social protest.