Why are the Americans providing the international media with information about alleged covert Israeli operations while the Europeans are ratcheting up the settlement boycott? 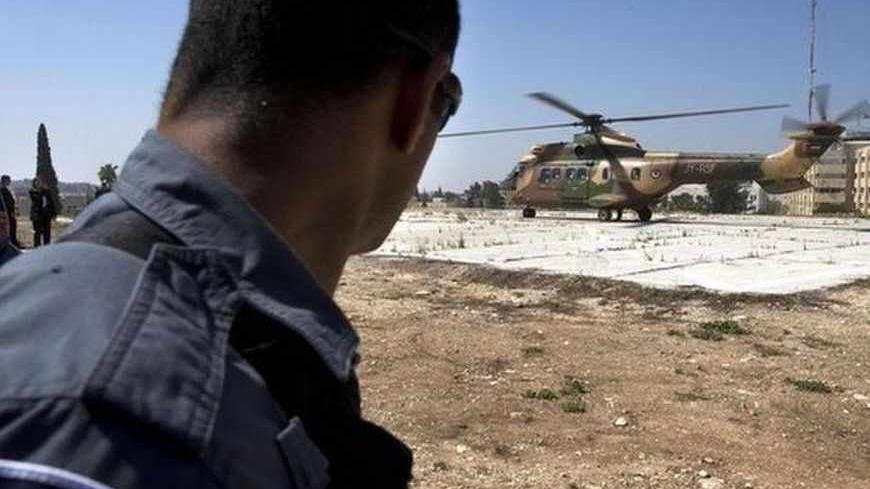 An Israeli security forces member stands by in Jerusalem as a Jordanian helicopter starts to lift off to take US Secretary of State John Kerry to Amman, June 29, 2013. - REUTERS/Jacquelyn Martin

This has become almost a routine occurrence in the region: A Syrian target is bombed in the wee hours of the night. Fighter jets stealthily make their way there and fire missiles from a distance. The target — be it an ammunition depot on the outskirts of an airport, a missile stockpile in a coastal city, a weaponry convoy bound for Beirut from Damascus or a nuclear reactor built in a desert area — is smoothly destroyed. No one claims responsibility.

The usual rumors point at Israel, which, of course, keeps mum. Then the United States comes along, spilling the beans. This is done either officially (in his memoirs, former US President George W. Bush explicitly said that Israel had bombed the Syrian reactor at Deir ez-Zor in 2007), less officially or implicitly. But invariably, Israel is sacrificed to the international media by its greatest ally.

The latest incident took place when at least three well-placed American sources told CNN that it was Israel that had destroyed the Yakhont shore-to-sea missile depot in Latakia.

The only remaining controversy pertains to the modus operandi: Israeli fighter aircraft that took off from a base in Turkey (which sounds outlandish), a Dolphin-class submarine that fired a cruise missile from the Mediterranean (which makes no sense) or just a simple, surgical and typical operation of the Israeli air force based on excellent real-time intelligence. The bottom line is always the same: Israel allegedly bombs and is then sacrificed by the United States. What on earth is going on here?

Tracking down leakers is a complicated, thankless pursuit with a slim chance of success. And I say this from experience. Oftentimes, you think the leak comes from one source only because that’s what the leaker wants you to think. The above notwithstanding, in connection with the events described in this article, it would seem that Israel does not have a real interest in informing the world that it was the one behind these acts (if that’s indeed the case). On the contrary.

The main concern in Israel is that Syrian President Bashar al-Assad — if and when he comes to the last stretch of his rule in whatever is left of Syria — will decide to settle a score and leave a clean slate behind him if only to restore his lost honor and that of his lineage. He might decide to launch a painful, perhaps even unconventional, attack on Israel. Similarly to the events of summer 2007, when Israel (according to foreign sources) bombed the Syrian reactor, investing great efforts in creating a heavy and effective smokescreen around the operation in order to stave off war, the same holds true this time around.

In other words, Israel clearly has a vested interest in keeping its actions ambiguous. There isn’t a single intelligence agency in the region that can ascertain for certain that Israel was the one that carried out the bombing, and give this vetted information to CNN. So the only player left in the game is the United States and its blabbing.

Officials from both the Israeli defense and political establishments believe that it is indeed the Americans who are allegedly disclosing Israel’s activity to the international media, and they do so deliberately on orders from the top.

This is not some anonymous American official in the Pentagon who feels like badgering the rogue ally; rather, this is a coordinated move. Why? Because the last thing the United States needs right now is a head-on confrontation with the Russia of President Vladimir Putin. For those whose memory fails them, Putin’s Russia still sides with Assad and his war on the insurgents, jihadists and al-Qaeda militants (whose numbers in Syria have been growing significantly).

And because there are only two countries capable of mounting attacks such as the ones that have been carried out in Syria (namely the United States and Israel), by stating it had absolutely nothing to do with them, the United States in fact sacrifices Israel. It also states, implicitly, that the Israeli strike was not coordinated with Washington and that it was not an Israeli-American-Turkish move or anything in that vein.

Why is that important to the Americans? Because Washington’s main point of interest at the present time is to bring home the whistleblower Edward Snowden. What’s left of the self-assured American power — which muddled up countries, then set them against each other, and propped up and brought down regimes and set agendas for entire continents — is a frightened state that uses all its power to apprehend some young kid who divulged to the world some of its secrets. (Secrets that are totally legitimate — anyone who thinks a country like the United States can defend itself without surveillance and eavesdropping should speak up or forever hold his peace.)

The Americans know that Snowden is in Putin’s hands, and that if they incense the Russian too much, he might help Snowden find a political asylum or award it to him himself. So with all due respect to the Syrians and Israelis, and whatever’s burning between them, Washington has zeroed in on Snowden and is intent on nabbing him regardless of the cost.

Let’s move to Israel’s other ally: Europe. On July 16, some earth-shattering news was published in Israel. After a long period of threats, the Europeans are shifting into action. The European Union has decided to prevent any funding or commercial ties with Israeli bodies operating across the Green Line, employing workers that live there or having commercial ties with the settlements.

Some people in Israel called this step an “earthquake.” Another move, namely labeling products manufactured across the Green Line, could follow. For many years, the people in Israel have talked about the possibility that the world would at one point switch to real actions in connection with boycotting Israel. The European directive is one step in that direction.

The initial Israeli response was one of shock and rage. The Europeans have no grasp of reality — former foreign minister and current Minister of Water and Energy Silvan Shalom said July 16. At this rate, they will never be able to take part in the diplomatic negotiations, he added.

The problem is that for all their lecturing to the Europeans, Israelis themselves fail to recognize a regrettable truth: They’re the ones who don’t have a grasp of reality. It is Israel that loses its legitimacy. Truth be told, the Israeli assertions to the effect that there is no connection between violence in the Middle East and in Israel have been proven to be correct.

The bloodbaths in Syria, Lebanon, Egypt, Iraq, Libya, Yemen and many other places lend perspective to the Israeli-Palestinian conflict, proving that of all the forces and organizations of the beleaguered Middle East, the Israel Defense Forces are the most moral and ethical military, that Israel is the only genuine democracy with a reliable judiciary and upright values, and so on and so forth. And it’s also true that the Palestinians had waged war and terror even before the “occupation." The Palestine Liberation Organization was founded before the Six-Day War. It’s all true, and today, more than ever before, the world has come to that realization, too.

Regrettably, however, all of this is irrelevant in relation to the settlements. Israelis are practical people who live one day to the next. “No worries” is the most common and current turn of phrase in the Israeli vernacular. The gentiles will make threats, but we shall overcome. In the end, it will all be good. The "strength of Israel will not lie" (Book of Samuel I, Chapter 15, verse 29).

Israelis are unable to fathom that the whole world — from the US to Russia to China, Europe, Africa and South America — is united in its stand not to recognize the areas occupied in the Six-Day War as Israeli territory. This is occupied land. This is what the world has decided. This is a ticking bomb that Israelis ignore. After all, they’re used to living in an area replete with ticking bombs. And the truth of the matter is that they have learned to defuse them, fight them and prevail. The problem is that this bomb is not part of the terror that constantly threatens Israel, but part of a legitimate international campaign that — working slowly and sluggishly — will eventually get here.

Shortly before the European directive came out, journalist Gideon Levy published an article in the Israeli daily Haaretz in which he announced for the first time that he was changing his position and supporting, as a patriotic Zionist Israeli, the calls to boycott Israel (until it pulls out of the territories). In Israel, Gideon Levy is a mere curiosity whose impact is negligible. The article did not spark a controversy and was buried in the archives the following day.

But then, the sun came up and Europe had spoken. This is no longer a curiosity. It’s not funny anymore. This could be very damaging to the stable and booming Israeli economy and blow up in the face of hundreds of thousands of Israelis living in the territories. The European directive arrives with the return of US Secretary of State John Kerry to the region, and I’m not sure this was not a coordinated move.

For many years, Israel has wanted to have it both ways, trying to have its cake and eat it, too. It seems to me that an urgent operation will have to be performed shortly in order to decide what part to give up.