Various bodies within the Iraqi government are debating the implications of a move to “reset” the national currency by deleting three zeros from it. 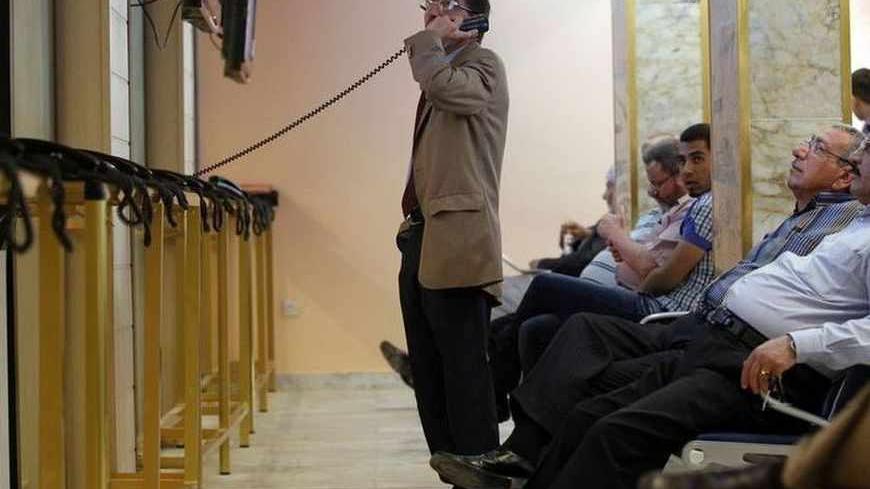 An investor speaks on the phone during trading hours at the Iraq Stock Exchange (ISX) in Baghdad, April 2, 2013. Last month's scene at the headquarters of the Baghdad bourse revealed the struggle which Iraq faces to modernize its financial system. It must overcome primitive, ultra-conservative savings habits born of decades of war and political instability. - REUTERS/Mohammed Ameen

Two Iraqi parliamentary committees monitoring fiscal policy in Iraq have held two contradictory positions on the Iraqi currency “reset” project, which would delete three zeros from the currency. There has been much debate about the project's feasibility and the date of its implementation.

In a statement to Al-Monitor, Mudher Mohammad Saleh, former deputy governor of the Central Bank of Iraq, warned against the consequences of such a step if it is not implemented at the appropriate time.

Abdul Abbas Shayya, a member of the Economic Committee in the Iraqi parliament, told Al-Monitor, “Reforming the management of the Iraqi currency now requires the deletion of three zeros. This has been endorsed by the parliamentary Economy and Investment Committee."

Shayya, an MP for the State of Law Coalition led by Prime Minister Nouri al-Maliki, added that the Economic Committee "asked the government and the Central Bank to quickly replace the current Iraqi currency with another that is less [in value] by three zeros."

"The Iraqi currency is weak, and the money supply has amounted to multi-trillions because of the existence of these useless zeros," he said. "The country will witness a significant increase in oil revenues, financial earnings and high budgets. Thus, we need to print new banknotes, as estimated by the Central Bank."

MP Nahida Daini of Ayad Allawi's Iraqiya List agrees with Shayya, her colleague in the Economic Committee. In an interview with Al-Monitor, she stressed the need to implement the Iraqi currency “reset” project. However, she said that the government fears money laundering operations in the event of the project's implementation.

She said, "The Economic Committee last week requested to implement the deletion of zeros from the currency, but the Council of Ministers asked to delay the process for fear of money laundering operations."

Daini believes that the government's fears "are mere concerns." She said, "There are regulators in Iraq who can follow up and ensure the integrity of the project."

Meanwhile, the parliamentary Finance Committee believes that channelling resources toward ensuring the stability of the local currency exchange rate is better than the deletion of zeros.

Magda al-Tamimi, member of the parliamentary Finance Committee, told Al-Monitor, "The delay in deleting zeros from the currency was due to fears of possible fraud operations. The Finance Committee is currently focused on controlling the currency auction," which is carried out by the Central Bank to ​​provide merchants with hard currency necessary for import.

Iraq’s fiscal policy has come under criticism due to the fluctuation of local currency exchange rates against global currencies.

According to Tamimi, "Iraq is not ready to control the possible currency fraud that may result from the deletion of zeros." The Finance Committee, Tamimi added, "is now working toward controlling the Iraqi currency auction, which is witnessing a significant fluctuation in the exchange rate of the Iraqi dinar against the dollar."

"Development is the gateway to strengthening the currency. Thus, raising the value of the dinar is more important than the deletion of zeros," she said.

Saleh told Al-Monitor, "The deletion of three zeros from the currency means deleting three grades from the calculation records of the Republic of Iraq. The decision to implement the deletion of zeros next year is very dangerous and risky. This issue must be done at the appropriate time."

Saleh added, "We need to reform the currency management and accounting systems in the country in general. This can only be initiated in a new fiscal year."

"There are many encouraging positive factors to reform the currency management system," he said, also noting that the deletion of zeros "does not only involve changing the design of the currency. It implies changing the economic system in the country in general."