As Iraq continues to suffer from an array of security problems, citizens have lost faith in the banking sector and are converting their money to gold to store at home. 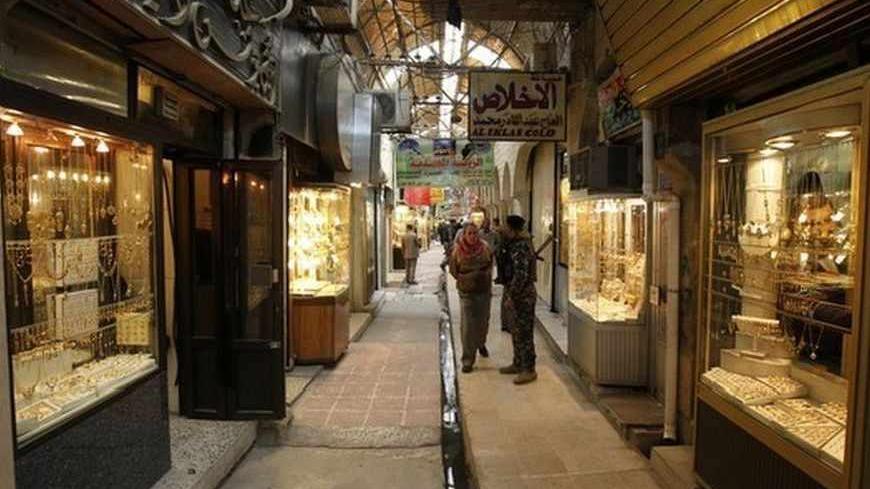 There is an old Arabic saying that "gold is both for decoration and storing." Currently, Iraqis, particularly residents of the Kurdistan Region of Iraq, are taking these words to heart. In the absence of a trustworthy banking system, they are converting their money into gold and stashing it in their homes. The Department of Standards and Quality Control for Gold and Minerals in the Kurdistan Region acknowledges that, indeed, large quantities of gold are being imported and distributed.

Bakr Aziz, the director of quality control for gold in the Kurdistan Regional Government's Ministry of Planning, revealed to Al-Monitor, "During the past six months, 49.4 [metric] tons of gold have been imported into Iraq through the Erbil and Sulaimaniyah airports." By comparison, according to Aziz, during the first seven months of 2012, some 34 tons of gold were imported.

He further explained, "Amounts of gold are brought in according to the needs of the Iraqi market. These quantities are brought in through the Erbil and Sulaimaniyah airports and distributed to all of Iraq." These two airports have surplanted Baghdad's airport as shipment points for gold due to the deteriorating security situation in central and southern Iraq and the lack of security in the airports there. By contrast, there is a "high level of organization in the Kurdistan Region's airports." Aziz reiterated, "[These airports] are secure, making it easier to bring gold into Iraq via the Kurdistan Region."

The director also pointed out, "Currently, there is strong demand for Turkish and Gulf gold [from Dubai], especially 21-karat gold, while there is not much demand for local gold." Some of Iraq's imported gold originates in Europe, but this portion constitutes only a small amount of overall imports.

The entry of such massive amounts of gold into the country is offset by the exit of large amounts of foreign currency, in particular US dollars, in which gold traders often deal. Aziz noted, "During the past six months, nearly $1.5 billion has left the region to purchase these tons of gold." He continued, "In addition, more than $100 million is being paid to gold factories outside the country, given that jewelers in Iraq pay approximately $2 per gram to convert raw gold into gold for decoration."

Aziz confirmed that the gold that reaches Iraq through the Kurdistan Region's airports is crafted for jewelry and ready for sale, and thus does not need refashioning. He offered, "There are currently about 120 gold-crafting shops in the Kurdistan Region, yet they can only meet about 10–15% of domestic market demand. This level of production is weak compared to the existing demand."

Regarding the reason the region has not built large factories to convert gold ore into gold for decoration, Aziz said, "This process requires joint work between businessmen, chambers of commerce and the government to encourage the building of factories and production facilities for gold in the region. [Such projects] require large amounts of money and substantial financial support." He added, "If there were large factories and production facilities in the Kurdistan Region, they would also provide about 6,000-7,000 jobs for citizens."

The Department of Standards and Quality Control is in charge of issues concerning silver and platinum as well as gold. The department licenses jewelers and gold companies and inspects jewelers' shops. It controls the gold that comes into the region through testing, taking samples from shops and companies, and responding to complaints filed by citizens.

Aziz said that there are currently about 1,300 gold shops across the Kurdistan Region, noting that as with gold-crafting shops, this is a small number compared to the increasing demand for gold. Gold shops in Baghdad and other cities had become targets for armed robbery, and some jewelers have been killed, prompting many of them to move to cities in the Kurdistan Region.

Economists believe that the improved economic situation and the increase in per capita income in the Kurdistan Region and some other parts of Iraq have pushed citizens to rely on gold as a way to save their money, given that it is easy to store. In addition, as Idriss Ramadan, an economic analyst and academic, told Al-Monitor, "In recent years, [many] Iraqi citizens have witnessed improved economic situations and their incomes have increased. They have no means of storing their money except through purchasing gold due to the lack of a safe [storage] place. Citizens do not trust banks, whether in the public or private sector."