Egypt's decision to close the Rafah crossing amid the recent unrest risks plunging Gaza into a crisis of its own. 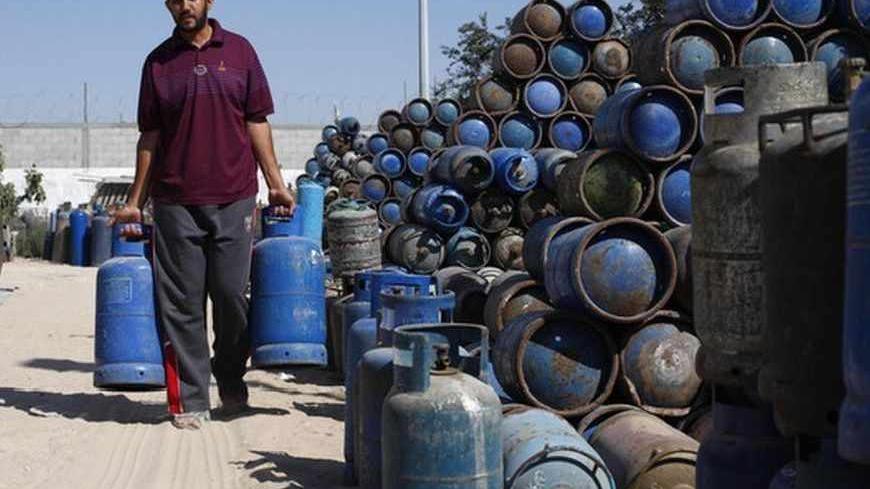 Gaza is facing a fuel crisis with serious snowball effects due to Cairo’s decision to close the Rafah crossing and tunnels along the border due to the continued unrest in Egypt. In addition to the coming fuel crisis, thousands of people have been stranded by the border closure, unable to travel to and from Gaza.

Amina al-Arqan was packing when she heard the news about the Rafah crossing’s closure. She was subsequently forced to extend her stay in Gaza. Arqan had been visiting her siblings, and now wants to go back to her family in Egypt.

Arqan told Al-Monitor, “I am so worried about them, especially with the escalation of tensions in Egypt. I wish I were with them amid the crisis. It is better than receiving news from afar.” Arqan, who suffers from diabetes and spondylosis, noted that she may miss her upcoming appointment with her doctor in Egypt.

Maher Abu Sobha, head of the Gaza Border Authority, told Al-Monitor in a phone interview that a real crisis looms after Egyptian authorities decided to close the crossing on July 5. Abu Sobha noted that in a few days, the number of people stuck in Gaza will reach tens of thousands, including college students, medical patients and workers, such as an Algerian medical group and the Kramich band for children, in addition to those on family vacations.

Abu Sobha said that the decision to close the crossing was not political, but rather the result of a security situation caused by current events. Abu Sobha called on Egyptian authorities to reopen the crossing, since it is the only means of passage for more than 1.7 million Palestinians in Gaza. He also noted that thousands are held up on the other side of the border waiting to enter the Gaza Strip, 800 of whom were performing umrah (pilgrimage to Mecca) and ended up stuck in Saudi Arabia.

Abu Sobha added, “The crossing remained open during the crises, even on June 30. That is why we hope to keep seperate from political conflicts. Communications are always maintained with the Egyptians in hope of reopening it in the upcoming days.”

Away from the queues of people, cars have been queuing for days in front of a gas station in downtown Gaza.

Munzil Yaziji, a van owner, told Al-Monitor, “I have been waiting for seven hours and I have not even been able to fill my tank with gas yet. I came yesterday as well and waited the whole day, yet my turn never came. I provide for my family with this van. I transport students to schools and take them for trips.” Yaziji affirmed that he could not buy the alternative Israeli gas, given its high prices.

The oil crisis flared up around three weeks ago as the June 30 demonstrations drew near. Consequently, security measures were tightened on the borders.

At the Terzi gas station, not far from the first station, there are no cars. This station sells Israeli gas, which continues to flow into the Gaza Strip. Amjad al-Achkar, the station owner, explained to Al-Monitor that Egyptian gas became scarce around a month ago. Currently, the cars are using Israeli gas, which is more expensive than Egyptian gas: one liter of the former costs six shekels ($1.64), while one liter of the latter costs four shekels ($1.09).

Yasser al-Soufi despaired as he filled the tank of his car with Israeli gas, saying, “I have to do this despite the rise in prices. Otherwise, my car won’t move — I can’t leave my job and wait at the station that has Egyptian gas.”

Mohammed al-Abadla, spokesman for the oil companies’ syndicate, told Al-Monitor that there are over 300 gas stations in all of Gaza’s districts, but only a few have Egyptian gas from previously stored reserves. He confirmed that the Egyptian crisis had a huge influence on the entry of gas from tunnels and halted the motion of 30% of cars in the Gaza Strip. If this were to go on for another week, the streets would be half empty.

During an interview held at his office, the director-general of the General Petroleum Authority, Abdel Nasser Mhanna, clarified that there were signs of a solution on July 6 and 7 after limited amounts of gas were pumped again through the tunnels. However, he said, these go immediately to the operation of the generators in vital sectors such as municipalities, water wells and sewage pumps. He confirmed that if the crisis persists, it will paralyze the facilities of daily life.

Mhanna also mentioned that the daily needs of the Gaza Strip amount to 350,000 liters of gasoline to serve all the facilities in the sector and 900,000 liters of diesel, 500,000 of which goes to the power authority to run the electrical plant.

The public-relations manager at the Environmental Quality Authority, Iyad al-Qatarawi, said that the gas crisis threatens to halt 190 oil wells that provide for most of the citizens of Gaza and 57 stations for collecting sewage and pumping it into the sea or other regions. He also clarified that these stations currently work extremely slow and already do not function at their full potential.

In a phone call with Al-Monitor, he warned of a nearing environmental crisis due to the accumulation of sewage, in addition to the near shutdown of four water-treatment plants that dump into the sea, which would lead to serious pollution on the coast. He also noted that if the dump trucks, which transport 1,500 tons of waste to the dumps every day from all over Gaza, stop functioning, the waste will stay in the streets.

The spokesman for the Ministry of Health, Ashraf al-Koudra, warned of potential health catastrophes if the crisis continues. Only 20% of the ministry’s gas reserves remain, not enough for even a week.

Koudra explained to Al-Monitor that the ministry had launched a gas-rationing plan, which calls for reliance on small generators for electricity cuts. He clarified that 10,000 liters of gas are needed daily for the operation of blood banks and health centers, 22,000 liters of diesel monthly for the operation of medical-staff vehicles, blood units, test samples, biohazard disposal and 150,000 liters of gasoline monthly to operate ambulances. He said that the low amounts of gas provided to the sector are simply delaying the catastrophe. He also estimated the average daily need of the health sector in Gaza Strip at half a million liters.

Koudra noted that this catastrophe threatens to halt the activity of 39 medical operation rooms, the lives of 38 patients hooked up to machines in intensive care, 110 children whose lives are dependent on electricity and 679 patients in need of 1,800 dialysis sessions per week. Electricity is also vital to 52 medical labs and freezers containing vaccines and delicate medicines.

With Egypt’s political crisis likely to continue, Palestinians in Gaza are bracing for impact.