The Coming Rapprochement Between Iran and the Brotherhood

As both Sunni and Shiite groups in the Middle East are targeted by the West and its allies, some predict a forthcoming Sunni-Shiite rapprochement. 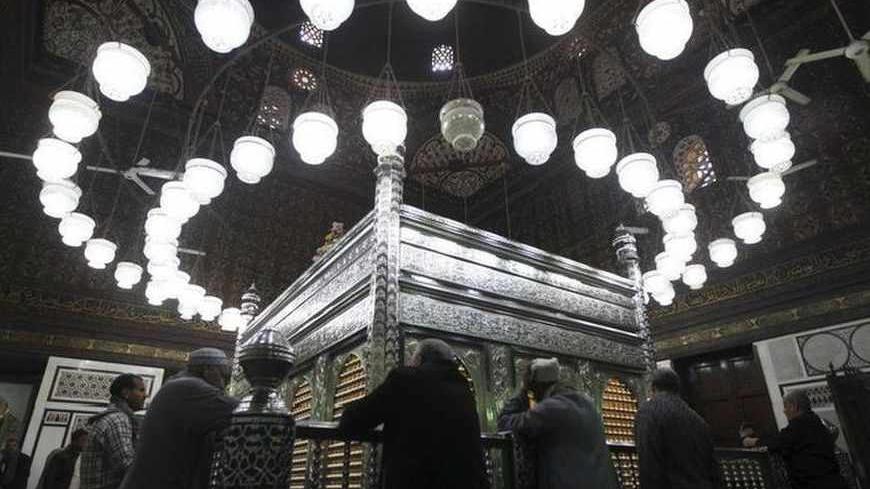 People pray at the shrine of the Prophet Muhammad's grandson Hussein ibn Ali at the Al-Hussein mosque before Iran's former President Mahmoud Ahmadinejad visited the mosque in old Cairo, Feb. 5, 2013. Ahmadinejad was both kissed and scolded when he began the first visit to Egypt by an Iranian president since Tehran's 1979 Islamic revolution. - REUTERS/Amr Abdallah Dalsh

A Lebanese MP close to Hezbollah confirmed to Al-Monitor that the "political Shiite" camp, stretching from Tehran to Beirut, is seriously considering a possible rapprochement with Sunni political Islam, represented by the Muslim Brotherhood in particular.

The MP's statements came hours before Hamas leader Ahmed Youssef declared that meetings were held between Hamas — considered to be the Palestinian branch of the Muslim Brotherhood — and Iranian officials, "to solve some of the issues that caused misunderstanding between the two sides."

Nevertheless, the reading of a possible step in this direction can only be understood in light of backgrounds and motives, some of which are related to the latest political developments, while others, dating further back, are associated with the ideology of so-called contemporary political Islam.

It has been said that this partnership was launched with the beginning of the so-called Arab Spring three years ago. The Arab revolutions were said to be the outcome of an alliance project between the West and the Muslim Brotherhood, with the coordination and support of the Brotherhood-oriented Turkey, headed by Prime Minister Recep Tayyip Erdogan.

Nevertheless, this project was short-lived. It did not last more than two years and a few months. Much has been said about the reasons for its downfall. Many claimed that the project began reeling with the Sept. 11, 2012 events in Benghazi, with the killing of the US ambassador. This is not to mention the tragic repercussions and turbulence in Cairo and Tunisia in particular, while the Muslim Brotherhood was said to have managed to monopolize power in both countries.

At first glance, the Muslim Brotherhood's populace appeared to still have intense hatred toward the West. It is unable to prevent violence against the West, its institutions, officials and interests. The Brotherhood even turned a blind eye to violent acts against the West, and has gone so far as to tolerate and even encourage them.

After Sept. 11, 2012, the Israeli war on Gaza in November was further proof that the "Muslim Brotherhood" was unable to take any positive steps in terms of the Israeli-Palestinian conflict.

Thus, the alliance between the West and the Muslim Brotherhood appears to have come to an end. This idea was further solidified with the collapse of the Muslim Brotherhood quartet in the region. This is especially true with the departure of Emir of Qatar Hamad bin Khalifa Al Thani. In Turkey, the Erdogan government was also dealt a severe blow. In Egypt, Morsi was deposed, and in Tunisia the rule of Ennahda has started to shake.

On the other hand, the relationship between the political Shiite camp and the West was not any better. In light of the ongoing Western blockade on Iran, the Shiite camp saw itself as a target of a Western war waged from Tehran to Baghdad, passing through Damascus all the way to Beirut.

The July 23 EU decision to place Hezbollah’s military wing on its list of terrorist organizations further emphasized this impression among Shiites. Thus, the MP close to Hezbollah believes that this is a very favorable opportunity to forge a rapprochement between these two Islamic sects that are both being targeted by the West.

Nevertheless, there are more significant reasons that would pave the way for such a rapprochement. These reasons can be summed up by the perspective of the Khomeini revolution in Iran on its legitimacy abroad. After the triumph of the revolution in 1979, it was clear that Ayatollah Ruhollah Khomeini was adamant on establishing its legitimacy at home and abroad.

Domestically, Velayat-e Faqih was founded. Externally, the legitimacy of the Iranian revolution was to be based on two pillars: Islamic unity upon the call of Iran and commitment to the Palestinian cause.

Khomeini's Shiite and Persian revolution erupted in a Sunni Arab region. It was clear that Khomeini feared that sectarian and ethnic factors would jeopardize the legitimacy of his revolution. He found that the best way to avoid these cons was to concentrate on the unity of Islam and commitment to the Palestinian cause, which was dubbed among Muslims as the "central cause of the Islamic world."

Therefore, Khomeini was keen since the start of his revolution to involve his government in different international Islamic frameworks, which would bring it closer to Sunni Muslims. Indeed, the Iranian government is part of the World Association of Mosques and the Organization of Islamic Cooperation, among other international Islamic institutions.

One of his prime achievements was the closure of the Israeli embassy in Tehran, which was replaced with the first embassy of the then-virtual state of Palestine, where late Palestinian Authority President Yasser Arafat raised the Palestinian flag.

It is no coincidence that the current Iranian leader, Ali Khamenei, was swift to call upon Egyptians to declare Egypt as the second Islamic republic in the region a few days following the eruption of the January 25 revolution.

For all these reasons, Iranian mullahs have been looking forward to having the Muslim Brotherhood as their partner in regional politics. In any case, the opportunity is now favorable for Iran to attempt to restore its ties with the Brotherhood. These relations seem to be more necessary now than ever for Tehran to confirm the unity of Muslims, while some speak of shifting the sectarian strife from Iraq to Iran, and of reigniting the fire with Israel, through Hamas, which would renew Iran's commitment to the Palestinian cause.

This is not to mention that Tehran is in need of an alliance with the Muslim Brotherhood to face Saudi Arabia, which stands out as the winner among Sunnis today, with its Wahhabi movement, which is seen as Iran's fierce opponent politically and dogmatically.

Yet Syria will remain the only obstacle preventing the establishment of such an alliance. The events in Syria have widened the gap between Iran and the Muslim Brotherhood, and Hamas and Hezbollah over the past two years. Iran and Hezbollah appear to have been working on ways to clear the way for the required rapprochement. Should this alliance be forged, the political scene in Syria and the entire region will be taken to a whole new level.