Turkish Prime Minister Recep Tayyip Erdogan’s government says the talks are on track, but the Kurdish side is warning of a break in the process. 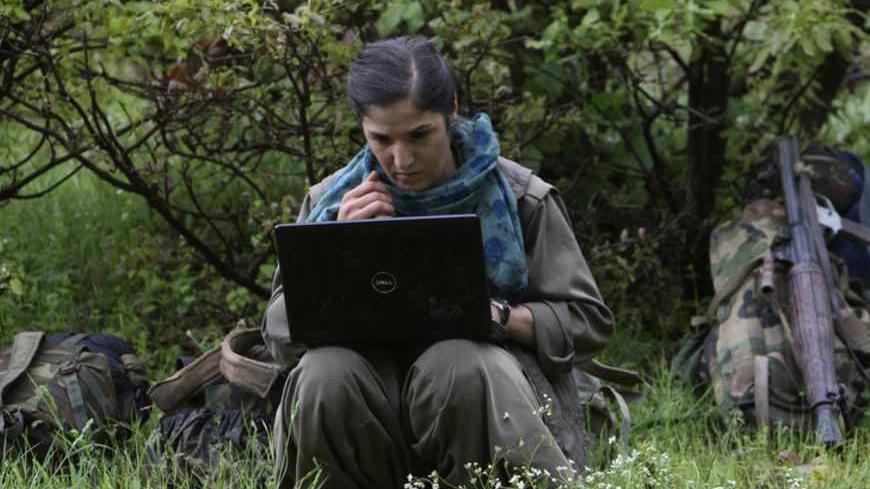 A member of the Kurdistan Workers Party (PKK) works on her laptop in northern Iraq, May 14, 2013. She was among the first Kurdish militants to withdraw from Turkey under the peace process and entered northern Iraq. - REUTERS/Azad Lashkari

We’re back to square one again, questioning whether Turkish Prime Minister Recep Tayyip Erdogan’s government has thought all the steps forward till the last one before launching the negotiations with Kurdistan Workers Party (PKK) leader Abdullah Ocalan. The public is still not fully aware of the depth of these talks, or the possible promises given on their behalf, but there are growing concerns that this process may soon be disrupted.

Murat Karayilan, the military leader of the Kurdistan Workers Party (PKK) based in Northern Iraq, for example, questions whether Erdogan comprehends what it means to engage in direct talks with Ocalan: “Look, the prime minister is even criticizing the nationalists while talking about the Gezi [Park] events. He says, 'How could you accept seeing Ataturk’s and a terrorist leader’s photographs next to each other?'” he told Firat News Agency yesterday [June 19].  “If you’re going to resolve the Kurdish issue, aren’t you supposed to help the nationalists accept him? If those nationalist circles have really internalized Leader Apo [popular name for imprisoned PKK leader Abdullah Ocalan], isn’t this a good thing?

"At the end, Leader Apo is the Kurdish people’s representative. And he is engaging in an official dialogue with the state and the government.”

Selahattin Demirtas, the co-chair of the pro-Kurdish Peace and Democracy Party (BDP), echoed the same sentiment today [June 20]. “How could you continue staying in a process with a rhetoric like “Terrorist leader, separatist leader.” Peace starts first in rhetoric, than turns into practice,” he said. “What would happen if I say day-and-night 'murderer Prime Minister,' would this process continue?”

Frazzled by the Gezi Park protesters’ unprecedented wit and strength that broke the routine narratives, Erdogan failed to keep in mind that parallel to the Gezi Park protests, the resolution of the Kurdish issue has been ongoing at the other side of the country, which stayed silent while the western part has provided chaotic pictures since May 27. There has been a cease-fire with the PKK for the past six months.

While Erdogan tried to benefit from people’s sensitivities about Ocalan, and tried to portray the protesters as allied with the terrorists when the PKK leader’s pictures also showed up on posters at the Taksim Square, he made the Kurdish camp doubt his sincerity about the process. Quite interestingly though, many in Ankara’s beltway are convinced that there is no second-guessing between Erdogan and the Kurdish camp: Things are moving according to plan, and all these statements reflecting of a pause in the talks are part of a public relations campaign.

Whatever the truth is, while Bulent Arinc, government spokesman, stressed in his recent remarks that the process is continuing without interruption, both Karayilan and Demirtas have been warning that the resolution process may stop.

“It’s not yet deadlocked, but the government’s manner is pushing it toward that end,” Demirtas said today [June 20]. Karayilan put it more bluntly: “In fact, the state is doing all it can to sabotage this process. It’s getting prepared to a war. This is what [we] openly see.” Karayilan was critical that the village guards are not yet demilitarized, and that the military continues with surveillance in the area.

Some analysts, however, don’t seem to be convinced that the PKK militants have withdrawn outside Turkey’s borders as promised. “They just showed few pictures to the media to create an image that they left the country, but they haven’t moved anywhere,” one prominent security analyst told Al-Monitor, who asked to remain anonymous due to the sensitivity of the issue.

Demirtas met with Sadullah Ergin, Minister of Justice, yesterday [June 19], along with Pervin Buldan, Idris Baluken, both BDP deputies, and presented a proposal to make changes in 25 articles related to laws like fight against terrorism, and lowering the ten percent threshold to be represented in the parliament.

Demirtas also said they will meet with the AKP authorities this week to see whether they will be able to make these changes into law before the parliament recesses for the summer.

“We don’t see that the government has done anything to prove its seriousness about the process,” Nazmi Gur, BDP deputy told Al-Monitor. “We were not even allowed to see Ocalan for about a month. This process can’t go on like this. If both sides want to see the bloodshed to end, and this issue to be resolved, Erdogan needs to be more forthcoming with the peace.”

The definition of the peace is however not clear for all sides. Or, put differently, nobody knows exactly as to what Erdogan considers peace with the Kurds looks like. The Kurdish side, on the other hand, is moving ahead like an open book.

At the Northern Kurdistan Unity and Resolution Conference in Diyarbakir on June 15-16, the Kurds demanded freedom for Ocalan and all prisoners of Kurdistan Communities Union (KCK), and the right to determine their own status in the form of autonomy, federation or independence. “The right of the peoples of Kurdistan to self-determination can only be exercised through the votes of the people of the region,” the final declaration read. This is no different than the Sevres Treaty when the Kurds were given the right to go to a referendum after a year establishing their autonomy.

The Kurds may choose to stay within the borders of Turkey or not. To them, it is an issue to be determined in the future, but they clearly want to claim their right to self-determination. If Erdogan is against going that far, he might have attempted to benefit from those Apo posters at the Taksim Square by casting doubt about protesters’ loyalty to the nation’s unity, but it’s still not making much sense how he might square it all for people who know a thing about or two about this process — that it’s only his responsibility to pull this process till the end or not.

If Erdogan, however, took the first step without thoroughly thinking through the process with its ups-and-downs till the end, there may be a real trouble ahead, risking a bigger fight with the PKK like never before.